SIMONA Rudavská worked at the Labour Ministry’s section for social insurance and pension saving when, at the end of 2010, a colleague offered her €20,000 in return for influencing a draft amendment to the legislation on pensions. She refused the bribe and later acted on behalf of the police in order to prosecute the corruption case. Along with two other people who displayed bravery and integrity, Rudavská has now become a ‘White Crow’, an award given out each year by the political ethics watchdog Fair-Play Alliance and legal think-tank Via Iuris. 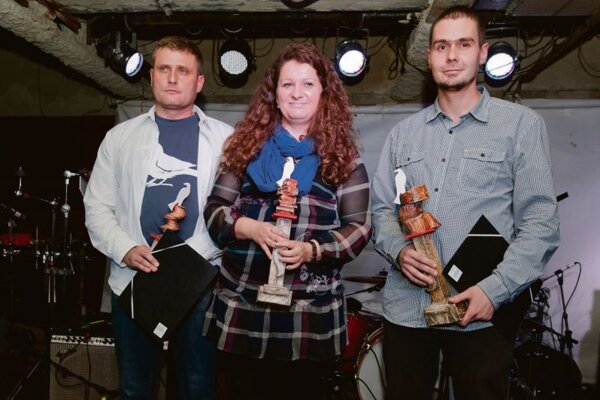 SIMONA Rudavská worked at the Labour Ministry’s section for social insurance and pension saving when, at the end of 2010, a colleague offered her €20,000 in return for influencing a draft amendment to the legislation on pensions. She refused the bribe and later acted on behalf of the police in order to prosecute the corruption case. Along with two other people who displayed bravery and integrity, Rudavská has now become a ‘White Crow’, an award given out each year by the political ethics watchdog Fair-Play Alliance and legal think-tank Via Iuris.

A former employee of the Interior Ministry, Jozef Žaťko, was also given a White Crow for helping to uncover a petrol accounting scam at the ministry, while Marcel Strýko, a former dissident and critic of the communist regime, was awarded posthumously for his lifelong achievements at a ceremony on November 17 in Bratislava.

The White Crow award honours Slovaks who take personal risks as whistleblowers by challenging unethical or corrupt behaviour, and for displays of civic bravery and integrity.

It goes to people willing to defend the truth and justice while sacrificing their personal interests for the public good, according to the White Crow award website.

The award is not a kind of magic solution, said Zuzana Wienk, head of Fair-Play Alliance, adding that she does not expect that the awards will resolve corruption. However, she stressed that what it can do is express gratitude towards those people who have acted.

“This is something: that [their stories] should be told to society,” Wienk said at the press conference.

The committee which picked this year’s White Crows included the vice president of the Czech Constitutional Court, Pavel Holländer, writer Tomáš Janovic, historian Ivan Kamenec, musician Jozef Lupták, journalist Martin Milan Šimečka, Hedviga Malinová Žáková, an ethnic Hungarian who reported to the police that she had been beaten up for speaking Hungarian and ever since has been dealing with prosecution bodies, as well as White Crow 2011 laureate Ivan Cehelský.

As a result of Rudavská’s cooperation with the police, the Specialised Criminal Court in Pezinok sentenced Labour Ministry employee Štefan Maliňák to two years in prison in May 2012. The Supreme Court in October 2012 overturned the verdict, reducing it to a two-year conditional prison sentence with a four-year delay as well as a €3,000 fine and a ban on working in the state administration for four years.

“It is an honour for me that my story has made it to the [White Crow] group,” Rudavská told The Slovak Spectator. “It is a commitment for me because I became a mother and parents want to bring up their children in the best possible way while trying to change the environment.”

Rudavská was head of the section of social insurance and pension saving at the Labour Ministry from 2008 to 2012. Following this year’s change of the government and the arrival of a new labour minister, Ján Richter, a nominee of the ruling Smer party, she was fired. After the media publicised her case the ministry allowed her to return and she has worked at its centre for analysis since August 2012.

Žaťko worked at the Office for the Protection of Constitutional Officials from 1991 and from 2000 was responsible for the transport of constitutional officials. He noticed that office employees were lying when reporting their fuel and petrol consumption.

There was a petrol spending allowance of up to 19 litres per 100 kilometres, depending on the type of the vehicle , but Žaťko pointed out that employees were in some cases consistently reporting consumption close to the maximum allowed amount, which was unrealistic. By doing so they were able to siphon the excess fuel in order to sell it illegally or use for their own purposes. Their superiors covered up their activities and told them how to remain unnoticed, Žaťko alleged.

In March 2010 Žaťko sent a notice to the Interior Ministry’s department for control and inspection service and a few days later filed a criminal complaint with the police. In response to the information reported by Žaťko, the office’s management rejected the allegations as false, according to the White Crows website.

“The interior minister [then, as now, Robert Kaliňák] blamed me without any investigation or process as having lied,” Žaťko added.

Four disciplinary proceedings were then directed against Žaťko between mid-April and early November 2010. One accused him of providing information to the media, another for his failure to attend psychological tests. The third proceeding was for failing to comply with his duties “strictly and conscientiously” and the final one was for his inaccuracy in filling in the book of arrivals and departures.

After he had made his initial allegations, his superiors took away Žaťko’s office entry card, placed him in a separate office and stopped giving him any work, so he was left with nothing to do. As a result of the disciplinary proceedings and his new non-job his income dropped by half.

“In the beginning, at my workplace, they even ordered me to note [every time] I went to the toilet four doors away, so it was obvious bullying,” Žaťko told The Slovak Spectator.

A subsequent police inspection at the Office for the Protection of Constitutional Officials into petrol consumption concluded that a crime had not been committed. However, the police found a breach of internal rules. Based on Žaťko’s warnings, the office then adopted measures which led to a drop in fuel consumption of 30,000 litres per month.

“It is with satisfaction that I can talk with you and you will send this message further which means that society and politicians will finally realise that nothing [about crime] can be done without such people being supported,” said Žaťko.

Back in 1987, Marcel Strýko attended a meeting of signatories of Charter 77, a petition signed by Czechoslovaks who stood in opposition of the communist regime during the period of so-called normalisation. He published a samizdat publication called the Thirteenth Room. Later, he left his job as a technician at Czechoslovak Television in Košice and started working as a manual labourer.

According to his own account, he was called in by the ŠtB secret police for questioning 282 times. He actively participated in the Velvet Revolution which ended the communist regime.

He was a cofounder of Civic Forum (OF), the Czech political movement in Czechoslovakia during the revolution and later joined the council and presidium of Public Against Violence (VPN), its Slovak counterpart, in the post-revolutionary period.

“All I can say is thank you, in the name of my father,” Martin Strýko, Marcel’s son told The Slovak Spectator in response to his father’s award.

Strýko opposed the division of Czechoslovakia and as a result was attacked and beaten up in 1994 leaving him hospitalised. He died the same year. The authorities insisted that his death was not related to the attack, according to the White Crows website.