THE JOBLESS rate in Slovakia remains a problem. The number of people registered with labour offices reached 410,432, or 13.69 percent, in October, which is 0.25 percentage points higher than in the previous month. In annual terms the number of jobless rose by 0.40 percentage points, according to the data presented by the Central Office for Labour, Social Affairs and Family (ÚPSVaR). The highest numbers of unemployed were reported in Banská Bystrica Region with 19.61 percent, Prešov Region with 19.59 percent and Košice Region with 18.86 percent. 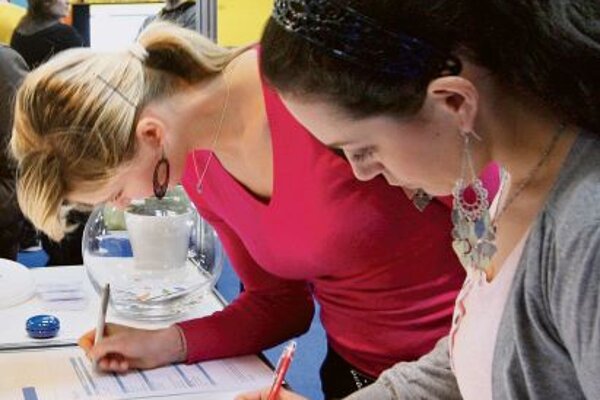 THE JOBLESS rate in Slovakia remains a problem. The number of people registered with labour offices reached 410,432, or 13.69 percent, in October, which is 0.25 percentage points higher than in the previous month. In annual terms the number of jobless rose by 0.40 percentage points, according to the data presented by the Central Office for Labour, Social Affairs and Family (ÚPSVaR). The highest numbers of unemployed were reported in Banská Bystrica Region with 19.61 percent, Prešov Region with 19.59 percent and Košice Region with 18.86 percent.

Predictions for employment in the future are not very positive because of the continuing economic crisis and the latest changes to the Labour Code which, according to some analysts, might even result in layoffs before the new law comes into effect on January 1, 2012.

In August the Labour Ministry presented a plan intended to curb unemployment that aims to create a total of 14,460 new jobs through EU-funded projects designed to boost employment of youths and people over 50 years of age. Based on an agreement between Slovakia and the European Commission, the government is to spend €70 million on two big projects: one designed for the private sector, and the other for community-based jobs in municipalities.

The main aim of the project is to support employment and decrease joblessness among selected groups of jobseekers through the creation of new jobs, reads an official press release from the Labour Ministry.

“The specific aim of the project is to help motivate employers to hire young unemployed and disadvantaged jobseekers over 50 years of age … [by] providing [the former] with experience and work habits via [newly] created jobs, and restoring the work habits of jobseekers over 50, and increasing their [presence] on the labour market,” the press release states.

Information about the initial number of applications will be known in early December, spokesperson for the ÚPSVaR Peter Zeman told The Slovak Spectator.

The Labour Ministry is not alone in expecting the new projects to decrease the number of unemployed.

“We expect interest from potential employers in all of the newly introduced projects, since they can represent a way to optimise personnel expenses during a time of increasing taxes and payroll taxes,” Luboš Sirota, head of the Trenkwalder recruitment agency, told The Slovak Spectator.

He added that municipalities, which must cut their expenses significantly this year, might also be interested in the projects. Though the interest of potential employees might be questionable, since the majority of the jobs will be created in sectors with lower salaries, Sirota expects that due to the extremely high number of unemployed, there will be more interest in lower paying jobs.

Yet, he pointed out that the contributions might ultimately end up as “misspent money”.

Sirota explained that these funds are in fact subsidising jobs that might either replace existing ones or might not be sustainable over the long term. Also, there is no way to prevent companies from claiming the money even if they are able to create new jobs without the assistance.

Nothing crucial will change for the long-term unemployed as a result of these projects, he said, adding that they will not help university students either.

Several players also warn that there is a big difference between the government’s projects and the real needs of the labour market.

“The government lacks any conception or strategy of solving the problem of not only youth unemployment, but unemployment in general,” Martin Hošták, secretary of the National Union of Employers (RÚZ), told The Slovak Spectator.

He explained that on one hand there are funds which should boost the employment of young people, but on the other hand there are several measures, including the latest changes to the Labour Code or the fiscal consolidation package, which limit the possibilities for employing disadvantaged groups of jobseekers (like school graduates, liberated prisoners or people over the age of 50). He suggests that instead of spending huge amounts of money to temporarily decrease the number of young unemployed, the government should solve problems with the education sector, so that the education profiles of school graduates “reflect the real needs of the labour market”.

Sirota says that if the projects were focused on quality requalification programmes, which would prepare jobseekers for existing open job positions, rather than on selected groups of the unemployed, the money would not be misspent.

Some proposals are questionable

According to the scheme, employers can receive a contribution between €434 and €522 per month, depending on the sphere of their business. The period during which successful applicants will receive the money ranges from six to 12 months, with the condition that the new jobs must be maintained for 21 months, according to the official announcement published by the ÚPSVaR.

The contributions will be provided from November 2012 to September 2015.

The salaries within the schemes should exceed the minimum wage. While the state will cover pay up to the minimum wage, any sums above this will be financed by the participating employers. The exact amount will depend primarily on the qualifications of the new employees.

The ÚPSVaR will divide the money among the local labour offices based on their unemployment rate. Each labour office will subsequently pick the applicants based on the amount the employee will earn, the number of people an employer wants to hire and the nature of the work agreement, the Sme daily wrote.

Businesses warn that the projects might bring several risks.

“I see the long-term indefensibility of such a solution as the main risk,” Róbert Kičina, executive director of the Business Alliance of Slovakia (PAS), told The Slovak Spectator.

Though he says the effort of the government to find quick solutions to a very high jobless rate is understandable, he adds it should not neglect supporting the business environment by solving system-wide problems, such as improving law enforcement, fighting corruption more effectively, decreasing red tape and easing regulations on employer-employee relations, which Kičina considers the best tool for decreasing unemployment.

The demand for the projects will also depend on the development of the economy, said Branislav Ondruš, state secretary of the Labour Ministry, in a statement published on the official website of the ministry.

“Certainly every work position is a success, especially if the young people do not end up at the labour offices,” Ondruš added.

Even if the job might be abolished after some time, the state secretary says it is positive that job seekers will at least gain some experience, which might benefit them when looking for a new job, Sme wrote.

Such statements only “confirm the indefensibility of the proposed solutions”, Kičina told The Slovak Spectator. Yet, he added that 18-months of work experience is better than nothing and believes that some of the employees hired through the projects will remain on the market even after the employers stop receiving the contributions.

Another problem cited by observers is that it will be hard to determine whether a company hires an employee that it had previously dismissed. Moreover, community jobs in municipalities may also have some risks, for example the misuse of temporary community work projects in municipalities, according to Michal Páleník from the Employment Institute. He doubts that the labour offices will inspect this form of employment any more than they do currently.

“I am very sceptical about these proposals,” he told the Spectator, adding that everything could turn out wrong. “Theoretically, if every part [of the project] fits, it can be very good, but I do not think they will fit. There are [many] risks.”