GERMANY continues to be Slovakia’s strongest economic partner, a relationship that remains unchanged despite the slowdown in economic growth that both countries have experienced as a result of the current global economic situation. 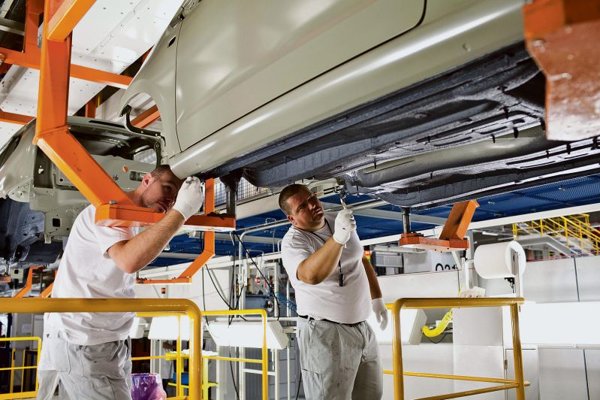 GERMANY continues to be Slovakia’s strongest economic partner, a relationship that remains unchanged despite the slowdown in economic growth that both countries have experienced as a result of the current global economic situation.

“The economic cooperation between Germany and Slovakia is excellent,” Reinhard Wiemer from the German Embassy to Slovakia told The Slovak Spectator. “Germany is the most important country for Slovak exports as well as Slovak imports…. There is no doubt that Germany will continue to be the most important economic partner for Slovakia.”

Juraj Zahradníček, the director of the international trade department at the Slovak Economy Ministry confirms the strong economic ties between the two countries.

“The high level Slovak-German relationship is also underscored by the economic dimension of mutual cooperation,” Zahradníček told The Slovak Spectator. “In 1998 Germany climbed to the highest position in [terms of] foreign trade with Slovakia, and since then it has maintained this position with a significant lead.”

“The economic revival, which followed the period of stagnation caused by the global financial and economic crisis, and the growth dynamics of German foreign trade have significantly reflected on the German-Slovak trade balance over the last several years,” said Zahradníček, adding that in 2011 Slovakia’s exports to Germany grew by 20 percent and imports increased by 16 percent.

The commodity structure of bilateral trade remained unchanged with cars, products of the eletro-technical industry and machinery continuing to make up the majority of Slovakia’s exports as well as imports with Germany.

Markus Halt, the spokesperson for the German-Slovak Chamber of Commerce, added that the volume of foreign trade between both countries accounted for €20 billion last year, which equates to nearly one fifth of Slovakia’s total foreign trade activities.

Germany is one of the biggest investors in Slovakia. Halt specified that while according to statistics issued by the National Bank of Slovakia, German companies have invested €4.5 billion in the Slovak economy, ranking third behind the Netherlands and Austria, according to statistics issued by the Bundesbank, the central bank of Germany, which also include investments through foreign subsidiaries, Germany’s total investment in Slovakia is worth €6.5 billion.

“Despite a focus on the automotive and metallurgy industries, German investors can be found in many sectors of the Slovak economy,” Halt told The Slovak Spectator.

Wiemer estimates that there are almost 500 German companies located in Slovakia employing more than 90,000 people. Halt added that based on the chamber’s estimate, the cumulative turnover of German companies corresponds to 31 percent of Slovak GDP.

“Although everyone in Slovakia knows the global players like Volkswagen, Siemens or Allianz, the significant majority of German firms are represented by small and medium-sized enterprises,” said Halt.

Over the last few years German investments have gone especially into the automotive, electro-technical, machinery and engineering industries, as well as the energy and financial sectors.

The Slovak Investment and Trade Development Agency (SARIO) has selected Germany as one of the future locations for its investment roadshows within the Business Friendly Slovakia programme. The agency has organised a number of investment seminars whose aim was to present the advantages of Slovakia’s business environment, in addition to highlighting various investment opportunities, prospects for the labour market and proposals for removing administrative burdens. SARIO plans to continue these activities next year, Ľubomíra Gabrielová, head of the marketing department at SARIO told The Slovak Spectator.

According to SARIO, all of the sectors of Slovakia’s economy are of interest to German investors but most of the focus is on the automotive and electro-technical industries, as well as R&D.

Since 2002 SARIO has assisted 59 companies who chose to invest in Slovakia. Under these projects, with investments totalling €1.034 billion, they created about 11,570 places of work.

Out of the current projects Zahradníček mentioned the expansion of Deutsche Telekom, which plans to build an accounting centre in Slovakia and create 500 new jobs, and Volkswagen Slovakia’s expansion to produce the new VW Up! passenger car, with estimated investments of €308 million and about 1,500 new jobs.

The R&D centre of Continental in Zvolen is expanding, too. German metallurgical company Thyssen–Krupp is also eyeing Slovakia, as is RWE IT.

According to Zahradníček, Slovakia endeavours to make use of Germany’s potential as a world leader in science and applied research, innovation and new technologies. In this respect he mentioned consultations about the usage and production of electric cars, and the support and introduction of renewable sources of energy.

“One of the profile events in 2013 should be holding a Slovakia day at CeBIT, the prestigious international fair of information technologies,” said Zahradníček. Apart from this fair, Slovakia regularly participates at Hannover Messe, a fair that focuses on the machinery and engineering industries; the InnoTrans transport technology fair; the ITB tourism fair; the IAA automotive industry fair, and others.

With regard to the perception of Slovakia as being a good location for conducting business, Halt said that German investors appreciate Slovakia’s membership in the EU and that they are satisfied with the productivity, motivation and qualification of its employees. Labour costs also remain moderate.

“Although the tax burden has lately become high in comparison with other central and eastern European countries it is still considered lower than in Western Europe,” said Halt, adding that surveys regularly indicate that the overwhelming majority of German investors are satisfied with their business activities in Slovakia. “Most of them would repeat their investment in Slovakia under the current conditions.”

However, German investors regard as barriers for doing business the poor state of infrastructure in central and eastern Slovakia, unsatisfactory law enforcement and the lack of transparency of public tenders, according to Halt. Another concern is the availability of skilled labour and the poor quality of vocational training.

While the latest statistical data indicate slowdowns for both countries, there is not expected to be a decline in economic cooperation.

The eurozone slipped back into recession during the third quarter of 2012, but Germany, along with Slovakia, continued to grow by 0.2 percent and 0.6 percent quarter-on-quarter, respectively. But the growth dynamics of both countries are slowing.

The German Embassy stressed that in recent years the German economy, which it described as innovative and export-oriented, has performed very well. Its unemployment rate is around 6.5 percent and has overcome the negative impact of the 2008-2009 financial crisis.

“It is clear, however, that Germany, with her heavy reliance on exports, cannot isolate herself from the euro-crisis and other turbulences in a globalised world,” said Weimer. “Therefore, the growth-rate is likely to go down in the next year to around 1 percent. Slovakia will be affected, because Germany is the most important country for Slovak exports.”

Nevertheless, Weimer believes that there will be no dramatic downturn in the economic relationship, since both countries have strong and resilient industrial and trade structures.

The German-Slovak chamber expects that, despite a double-digit increase this year, further growth in Germany’s imports and exports will slow as the world economic climate becomes more challenging. Halt stressed that recent prognoses indicate that while most European countries are expected to maintain their current recession tendencies, the German economy is forecast to grow by around 1 percent in 2013.

“This means that Germany will continue to generate economic impulses with Slovakia,” said Halt.