German culture offers something for all

BOTH THE German Embassy and the Goethe Institut in Slovakia, which organise cultural and social events for the local public, emphasise the importance of spreading their native language in the central European region. However, they also bring to Slovakia a sampling of German culture through numerous and diverse forms of art, like classical and jazz music, film, modern dance and photography, among many others. 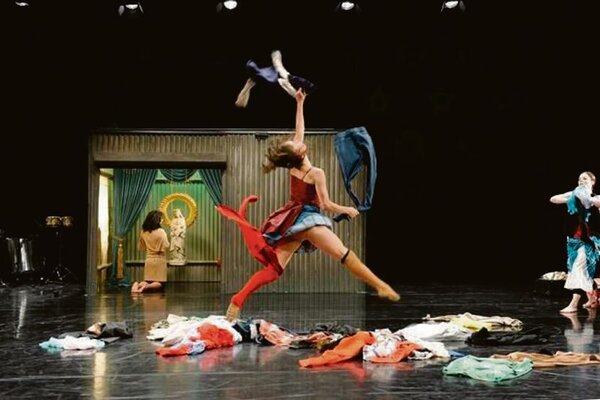 BOTH THE German Embassy and the Goethe Institut in Slovakia, which organise cultural and social events for the local public, emphasise the importance of spreading their native language in the central European region. However, they also bring to Slovakia a sampling of German culture through numerous and diverse forms of art, like classical and jazz music, film, modern dance and photography, among many others.

One of the most successful feats of the Goethe Institut was – in cooperation with the Divadelná Nitra theatre festival – organising the dance performance by Constanza Macras and her DorkyPark troupe “Open for Everything”. Macras is a choreographer of Argentinean origin living in Berlin who prepared this piece with young Roma performers from Hungary, the Czech Republic and Romania (and one musician from Slovakia, although working currently in Prague). After working on the piece for over a year and spending a lot of time training the mostly under-aged Roma, the director then choreographed and created a performance almost two hours long that, after premiering in Berlin, toured countries throughout Europe.

The show addressed the plight of contemporary young Roma and their struggle to find their identity – caught between rejection and contempt by non-Roma and the lack of new role models and prospects in their own environment. It premiered on September 21 at the international Divadelná Nitra theatre festival in the city of the same name, before moving on to Košice on September 23.

“Both our embassy and the Goethe Institut (GI) supported and organised quite a few activities,” Roland Westebbe of the German Embassy to Slovakia told The Slovak Spectator. “To name just a few, there was the cultural programme preceding this year’s Rainbow Pride march, the new museum of the Jewish community in Bratislava and classical music concerts.”

Westebbe mentioned the success of past Christmas concerts, adding: “This year, at the beginning of December, we have concerts at St Martin’s Cathedral in Bratislava and the House of Arts (Dom umenia) in Košice, where we will stage Bach’s Christmas Oratorio with students from the Franz Liszt School of Music from the German city of Weimar.”

Asked by The Slovak Spectator about viewers’ preferences, Westebbe explained, “There is a great variety of preferences among the Slovak public when it comes to cultural events. We, as an embassy, try to offer something for both the general public (such as the Christmas concerts and our participation in the International Women Club’s Christmas Bazaar), as well as for minorities (including the LGBT community), and for younger generations, a poetry slam workshops. In the last instance, we and the GI independently invited German poetry-slammers to Slovakia who then worked here with local children and students and showed them how to make use of the German language in a creative way.”

German Ambassador to Slovakia Axel Hartmann stressed the importance of the city of Košice as the European Capital of Culture 2013 (ECoC or EHMK), and Zuzana Beniačová of the Goethe Institut explained their support for the K.A.I.R. (Košice Artist in Residence) programme – an international artistic residential programme within the EHMK 2013 project, which invites artists to stay in Košice for three months to collaborate with local artists. The concluding exhibition presents the work of local residents. The German artists who have participated in the programme so far are Claire Wafel, Maya Schweizer and Susken Rosenthal.

“We emphasise mutual Slovak-German cooperation – we do not want to be a mere showcase of German culture,” Beniačová informed The Slovak Spectator. “We do also care about collaboration with other European cultural institutions.”

As another example, she mentioned Sound Exchange Days, a year-long project taking place between November 2011 and 2012, focused on searching for the roots of experimental music culture in central and eastern Europe and re-discovering this partially forgotten phenomenon. It connected seven cities (Krakow, Bratislava, Tallin, Vilnius, Budapest, Riga and Prague) and was presented via local festivals, concerts, workshops and a travelling exhibition about the experimental musical scene. In Bratislava, this included an exhibition and several concerts within the NEXT festival.

Other activities of the GI include an international scientific conference on urbanism at the Faculty of Architecture of the Slovak University of Technology in Bratislava, and a regional project that already took place in Bratislava but is still underway elsewhere: Mesto budúcnosti / The City of the Future – Making Heimat, an initiative aimed at encouraging citizens and locals to create comfort zones and public spaces in their home-towns. The GI also brought German artists Roman Bezjak and Walter Bergmoser to the Month of Photography and Socialist Modernism exhibitions in Bratislava, and German trumpeter Till Brönner to the Bratislava Jazz Days festival. A German presence at various dance festivals and screenings of German films rounded out the activities of the GI this year.

Both the GI and the embassy stress the importance of language and point to a growing interest in German-language courses and other activities connected with the language. Initiatives toward this end include support for the Onleihe digital library and the Language Café, a multilingual meeting event for language enthusiasts.

“When it comes to public taste, the German language is in very high demand by Slovaks,” Westebbe told The Slovak Spectator. “This becomes clearly visible when looking at the numbers of course participants in the Goethe Institute – since 2007, they have increased by 50 percent.”