IT IS now 45 years since a unique character well known to the older inhabitants of Bratislava passed away. Ignác Lamár, nicknamed Schone Náci, became an unforgettable figure thanks to his outfit and exceptionally good manners. A life-size statue resembling Lamár, the work of Juraj Meliš, now stands near the Main Square in Bratislava’s old town. 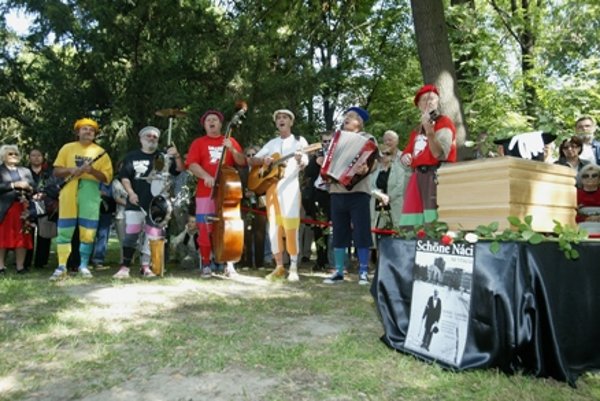 IT IS now 45 years since a unique character well known to the older inhabitants of Bratislava passed away. Ignác Lamár, nicknamed Schone Náci, became an unforgettable figure thanks to his outfit and exceptionally good manners. A life-size statue resembling Lamár, the work of Juraj Meliš, now stands near the Main Square in Bratislava’s old town.

Lamár was born on August 11, 1897, in the Petržalka borough of Bratislava. He was a shoemaker’s son and he himself also learned this trade. When his mother left the family and fled with a lover to Vienna, his father started drinking heavily. After his father’s death, all the family’s possession went to cover outstanding debts. Lamár got a job in theatre workshops, but was sacked when the theatre fell into a crisis during World War I. He started earning money with occasional small services: he cleaned flats, carpets, brought coal from cellars. He lived in various rented rooms and flats, taking with him a black suitcase with a tail-coat, black lacquered shoes, white gloves and a bowler hat which Countess Náriová once donated to his father after her husband’s death. One day, he donned all these garments, trained a smile in front of a mirror, and took to the streets. He dreamed of being a clown in a circus and thanks to this, he came closer to his dream. He became a well-recognised person in the streets of Bratislava. He promenaded from Michalská Street to the Danube river, greeting people, especially women, in the three languages which were commonly spoken in Bratislava – German, Hungarian and Slovak, while also doffing his hat.

Later, he became a prominent patient of Imrich Sečanský, who mentions him in his book of memoirs Spomienky a vyznania lekára / Memories and Confessions of a Doctor. The song about Schone Náci is part of the repertory of the local band Lojzo, which also recorded it on their album Ticho po plešine. In 2007, his remains were moved from pauper’s grave in Lehnice (where he died in a tuberculosis sanatorium in October 1967) to a memorial grave in Bratislava’s Ondrejský [i.e. St Andrew’s] cemetery. In this last funeral, not only priest Anton Srholec but also Lojzo took part, with the band playing their popular song about Schone Náci. About 400 Bratislavans, mainly older people, bid farewell to Náci on this occasion. Since 2007, a cultural event commemorating him, called Schone Náci opäť medzi nami / Schone Náci Again Among Us, takes place annually at the U červeného raka / At the Red Lobster reading space. In 2012, Dušan Roll, founder of the Bienále ilustrácií Bratislava / Biennial of Illustrations Bratislava, received the statue and award of Schone Náci.