WHAT had been heralded as an unlimited nationwide strike by teachers aiming for a 10-percent pay rise was interrupted on Wednesday, November 28, after just three days with pupils and groups of disappointed teachers returning to schools and the teachers’ unions sitting across a negotiating table from the government. By November 29, the Trade Unions of Employees of the Education Sector and Science (OZ PŠaV) had still not reached any definite agreement with the government, but published a statement on its website claiming that support for the strike had dropped significantly in the regions. However, the New School Unions, another trade union representing teachers, called the interruption of the strike a waste, and teachers at several schools around Slovakia vowed to continue striking. 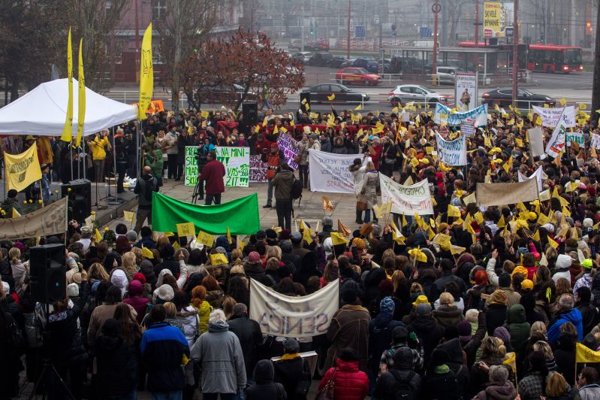 WHAT had been heralded as an unlimited nationwide strike by teachers aiming for a 10-percent pay rise was interrupted on Wednesday, November 28, after just three days with pupils and groups of disappointed teachers returning to schools and the teachers’ unions sitting across a negotiating table from the government. By November 29, the Trade Unions of Employees of the Education Sector and Science (OZ PŠaV) had still not reached any definite agreement with the government, but published a statement on its website claiming that support for the strike had dropped significantly in the regions. However, the New School Unions, another trade union representing teachers, called the interruption of the strike a waste, and teachers at several schools around Slovakia vowed to continue striking.

“If we fail to reach an agreement with the government, we will continue in our activities,” reads the official statement on the website of the OZ PŠaV.

During the strike, Finance Minister Peter Kažimír publicly announced that he had identified yet another gap, this one of €250 million, in the state budget and that it would have to be filled if Slovakia were to meet its sub-3-percent 2013 budget deficit target. Prime Minister Robert Fico confirmed that this had had an effect on negotiations with the teachers’ unions, according to the TASR newswire.

Kažimír offered teachers a 5-percent pay rise on October 9, arguing that the state could not squeeze more than €65 million from its coffers. However, late on November 29, after talks with union leaders, Fico hinted that more money might be made available to boost salaries, Sme reported.

Education Minister Dušan Čaplovič said on November 27 that the demands of the unions and teachers on strike should be addressed in their complexity through negotiations and systemic changes, not on the streets. Previously, he had acknowledged that “their demands are understandable considering the fact that during 20 years of the existence of Slovakia the status of teachers in society has not been addressed, and only unsuccessful experiments in the area of education have been offered”, the SITA newswire wrote.

Nevertheless, Ondek told The Slovak Spectator on November 28 that he was positive about the course of the strike.

“People are determined to fight for their demands,” said Ondek, adding that the negotiations begun with the government also represented a success.
Ondek stressed that the trade unions were still protesting while they negotiated with the government – just not by striking.

Ctibor Košťál of the Slovak Governance Institute explained that teachers’ wage demands were a result of their “long-term frustration and the weak rewards”, but added: “I do not think they solve the systemic shortcomings”.

The key problem is the low level of school financing, Košťál told The Slovak Spectator while conceding that “more money does not necessarily mean a change in the quality of education”.

According to Košťál, the problem is that finances are not precisely targeted at education itself, which means that not all the money allocated for the sector is actually spent on education.

While Košťál suggested that it is hard to come up with a sum which would be appropriate for the government to invest in the education system, he suggests that it should be slightly above the level of Slovakia’s neighbours in the Visegrad Group.

“[It should be] moderately above [this level] mainly in connection with the need to introduce an inclusive model of education with regards to shortcomings in the education of children from marginalised communities,” said Košťál, adding that it could be secured by directly binding the money to education in such a way that it could not be diverted for other uses by regional governments.

The Finance Ministry has suggested one way to increase school employees’ salaries: decreasing the number of teachers.

“We are offering 5-percent without a fundamental decrease in the number [of teachers],” Kažimír said in comments to Radio and Television of Slovakia (RTVS) on November 25, adding that, for example, if 1,000 teachers left, the government would be able to hike the salaries of those remaining by about 1.6 percent.

Košťál downplayed the government’s argument that a 10-percent pay hike would be possible only if the number of teachers were reduced and said that this argument “is only a supplementary argument to divert attention”.

“The government is using the reduction of the number of teachers as a scarecrow, but it is a long-term process which could not be launched immediately,” he told The Slovak Spectator, adding that in fact teachers have not chosen the most suitable time to strike. He pointed to the current pressure on the state budget, and the proximity of Christmas, which is reducing teachers’ motivation for a longer strike.

Košťál stressed that, on the other hand, teachers should insist on a clear obligation from the government towards hiking salaries as its first priority from 2014 at the latest.

On the first day of the protests the highest number of striking employees was reported by Košice and Prešov Regions, where support was reported to be around 85 to 90 percent of school employees. On the other hand, the lowest support was in Nitra Region, where only about 66 percent of employees participated, the Sme daily wrote.

There were three mass protests, in Bratislava, Košice and Banská Bystrica. Bratislava saw about 4,000 people from schools in the city and across western Slovakia. The protest was also attended by Ondek, who told the crowd that the strike was “a test of courage and determination which we pass in front of the government, public, our students, parents and, most of all, in front of ourselves”, TASR reported.

About 2,000 protesters turned out in central Slovakia, while the Košice protest was attended by about 2,500 demonstrators, TASR wrote.

Support for the strike in other towns around Slovakia varied. While, for example, in Trenčín all public schools and nurseries remained closed on November 28, in Medzilaborce every school was open, and in Humenné only five teachers went on strike. At one secondary school in Tvrdošín the teachers protested only during one of their breaks, when they went into the schoolyard, Sme reported.

Several schools announced they would continue with the strike even though their trade unions had officially interrupted it. The schools included Bratislava secondary schools such as the Secondary Grammar School on Bilíkova Street, the Gymnasium Metodova, and the Ľ. Sáru Street Gymnasium in Bratislava, as well as some others around Slovakia, like the gymnasium in the town of Myjava, in western Slovakia, TASR reported.

After a meeting between the Education Ministry, trade unions, representatives of employers and representatives of municipalities on November 22, Čaplovič called on local mayors to provide places where children would be allowed to spend time during the strike, SITA wrote.

But it seems that parents did not choose to take advantage of this option. For example, no more than 11 children appeared at each of Bratislava’s special centres and clubs during the first day of the strike. A similar situation was reported in other towns. One exception was the volleyball club in Myjava, which took in about 55 children, Sme reported.

Some paediatricians were afraid that parents would fill their waiting rooms seeking permission to stay at home to take care of children by using the so-called OČR, a means of obtaining a day off work by any parent with an ill child younger than 10. Yet several doctors around Slovakia said that they did not have any more patients than during an average day.