CENSORSHIP of Slovakia’s history, national shame and even Satanism; these were some of the explanations floated in Slovakia in response to a move by the central bank, the National Bank of Slovakia (NBS), to change the original design of a commemorative €2 coin depicting Saints Cyril and Methodius. The coin is supposed to be released in 2013 to mark the 1,150th anniversary of their arrival in Great Moravia. 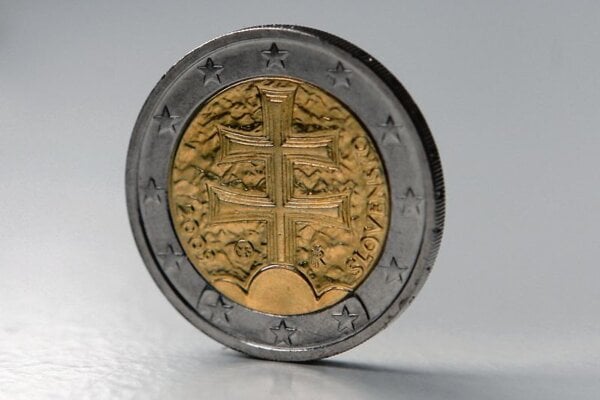 CENSORSHIP of Slovakia’s history, national shame and even Satanism; these were some of the explanations floated in Slovakia in response to a move by the central bank, the National Bank of Slovakia (NBS), to change the original design of a commemorative €2 coin depicting Saints Cyril and Methodius. The coin is supposed to be released in 2013 to mark the 1,150th anniversary of their arrival in Great Moravia.

The Bank Council of the NBS initially accepted opinions from France and Greece, submitted via the European Commission (EC) during the design approval process, objecting to the release of a coin showing the saints bearing religious symbols, specifically crosses and halos. The commission, conveying those objections, stated that the symbols should be removed based on the need to observe religious neutrality, as set out in the Charter of Fundamental Rights of the EU, according to the Sme daily.

However, the Christian Democratic Movement (KDH), Slovak Democratic and Christian Union (SDKÚ) and Most-Híd party on November 22 sent a letter to NBS Governor Jozef Makúch demanding that the NBS insist on the original artistic proposal for the coin. The NBS’s original decision also encountered criticism from the Slovak Bishops’ Conference (KBS), representing the Catholic Church.

“We think that this is a case when we cannot remain silent since even [religious symbols] form our, as well as Slovak citizens’, historical consciousness,” said Ľudovít Kaník of the SDKÚ, as quoted by the TASR newswire. “It also forms [people’s] pride in their country, nation and the environment from which they came as well as the history from which they emerged.”

The following day, November 23, the NBS decided that the coins would retain the religious symbols in line with the original proposal. It claimed that the European Commission had changed its attitude from August 20, and had published a revised opinion on November 22.

In reaction to criticism of the proposed changes to the coin’s design the EC Representation, on November 22, also issued a press release rejecting descriptions applied to the move that had been quoted in the Slovak media, among them “Brussels’s dictate”, “a caprice of European Commission workers”, and “objections of Brussels’ office holders”.

“The Slovak Republic accepted those objections by member states and offered a modified proposal, which the Council of the European Union accepted and which Slovakia also voted for,” Králik explained in his press release.

The NBS explained that it had accepted the European Commission’s requirement to remove halos and crosses on the coin’s design for several reasons. It hinted that if it were to insist on the original design that could mean that no coin commemorating Cyril and Methodius’ arrival in Slovakia is ultimately issued.

“Even the Vatican changed its original commemorative coin [design] proposal in a similar case in the past, a fact considered by Bank Council of NBS when deciding,” Pauerová said.

In a press release on November 20, the NBS said it was convinced that the amended proposal for the commemorative 2-euro coin, without halos and crosses, appropriately connected Slovakia’s symbol of statehood and a symbol of Christianity – a reference to the image of a bishop’s staff which remained part of the design.

However, in its press release just three days later, the NBS announced that its Bank Council had approved the original proposal for the 2-euro coin design, while acknowledging that there was a threat that the EC would not approve it.

Anna Záborská, an MP for the KDH, was among those who criticised the NBS decision to change the original design. She claimed that Slovakia would be resigning itself to censorship of its own history if it were to accept the objections. She claimed that the case represented “the anti-Christianity context visible in the European Union”, the SITA newswire reported.

“We see how freedom of thinking, conscience and Christians' religion is denied in the name of wrongly understood tolerance even though it is granted in the Charter of Fundamental Rights of the European Union,” Záborská said, as quoted by SITA.

She publicly asked the NBS governor as well as Finance Minister Peter Kažimír how it is possible that they did not try to defend the original coin design when “just” two European countries objected to the proposal. She argued that the historical arguments favour Slovakia, SITA reported.

The KBS sees the removal of crosses and halos from the coin design as a “cultural turning point” and as having dishonoured Slovak history, said bishops’ spokesperson Jozef Kováčik, as quoted by the Pravda daily.

Meanwhile, the deputy chairman of the extra-parliamentary Slovak National Party (SNS), Rafael Rafaj, claimed that there were more sinister reasons behind what he called the repeated attacks on Christian symbols and Christianity itself.

“I need to voice a serious and disturbing suspicion: that the EU is under the control of Satan or Satanism,” Rafaj said, as quoted by TASR.

However, Ján Steinhübel, a historian at the Slovak Academy of Sciences, insisted that the removal of religious symbols from coins was understandable.

“We are a secular state which is not bound to any ideology or specific religion,” Steinhübel said, as quoted by Pravda. “When they operated here [in Slovakia] they were not yet saints, [therefore] it is acceptable even from a historical point of view.”

Cyril and Methodius were brothers born in Thessalonica in Byzantine Greece at the beginning of the 9th century who later became priests and missionaries. They created the Glagolitic script (which was later adapted to become the Cyrillic alphabet, named in honour of Cyril), in order to translate the Bible and other sacred texts into Slavic languages.

Cyril, who for most of his life used the name Constantine, died in 869 and Methodius in 885. They were later canonised as saints, with Ss Cyril and Methodius Day being celebrated on May 24 to mark the anniversary of Cyril’s death. In 1980 Pope John Paul II declared Cyril and Methodius patron saints of Europe, according to the EU website.