FOR MOST Slovaks the phrase ‘2 percent’ requires no explanation. It has become a synonym for fundraising for non-profit and non-governmental organisations, and support for their activities. Under a relatively long-established scheme, private individuals and corporate entities can decide to assign 2 percent of their income taxes to a specific non-governmental organisation. The scheme was created to renew a positive attitude among people to philanthropic activities, something that was interrupted during the communist regime. It had been planned to replace this with other fundraising mechanisms and donations. 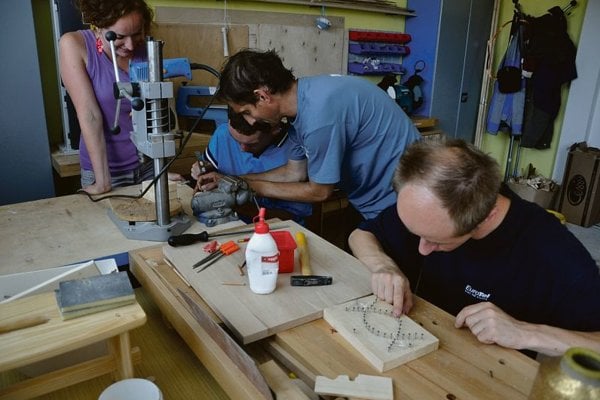 FOR MOST Slovaks the phrase ‘2 percent’ requires no explanation. It has become a synonym for fundraising for non-profit and non-governmental organisations, and support for their activities. Under a relatively long-established scheme, private individuals and corporate entities can decide to assign 2 percent of their income taxes to a specific non-governmental organisation. The scheme was created to renew a positive attitude among people to philanthropic activities, something that was interrupted during the communist regime. It had been planned to replace this with other fundraising mechanisms and donations.

However, the financial and economic crisis has interrupted these plans and after long negotiations with non-profit and non-governmental organisations the Finance Ministry has decided to extend the current set-up for another year.

“We do not regard this as a victory, but a reasonable step in the current situation,” Pavel Hrica, programme director at the Pontis Foundation, a leading NGO, told The Slovak Spectator in response to the Finance Ministry decision, adding that it still needs approval from parliament.

Radko Kuruc, an adviser to the finance minister, explained to The Slovak Spectator that the proposed adjustment should mitigate the effect of the crisis on non-governmental organisations providing social welfare services.

“The intention of this adjustment is to secure via the assistance of the third sector especially better life, educational and sport activities for socially weaker groups of people, people suffering from diseases and youth,” said Kuruc.

Non-profit and non-governmental organisations regard the tax assignment scheme as a crucial source of financing for their activities and had warned that the planned decrease in assignments and increase in donations as a potentially devastating blow.

“Two percents are one of the most important sources of income for non-profit organisations,” Hrica said on November 23, as quoted by the SITA newswire, adding that if NGOs lose this income then problems, which to date the state has not had to address, may emerge. “Suddenly more people suffering from diseases who have nobody to help them may emerge, or the number of homeless people on the streets may increase.”

When it began, the income tax assignment scheme allowed only private individuals to allocate 2 percent of their income tax payments to a chosen non-governmental organisation. Later, the scheme was extended to companies. In 2009 the government changed the corporate scheme to encourage donations by companies from their own profits. Under the altered scheme a company can assign the maximum portion of its corporate tax dues only when it donates money from its own profits; the percentages that should be assigned and donated can vary, but the total should always be equivalent to 2.5 percent of paid taxes.

NGOs were afraid that in the current, challenging economic situation this change would have reduced their incomes to such an extent that their basic activities would be endangered. Instead, they proposed keeping the existing formula, i.e. 0.5 percent of donations to assign 2 percent, for the next three years.

The Finance Ministry did not initially agree, and proposed only to slow the decline in the assignment, to 0.75 percent of donations to assign 1.75 percent, for the next two years (applying to the 2013 and 2014 taxation periods). Eventually, on November 28, the Finance Ministry proposed to keep the current set-up (to assign 2 percent of taxes, companies have to donate a sum equalling 0.5 percent of taxes) for the taxation period of 2013.

When presenting its first compromise proposal the Finance Ministry argued that it could actually bring non-profit and non-governmental organisations more funds. Radko Kuruc, an adviser to the finance minister, told The Slovak Spectator that, taking into account draft revision to income taxes, which has advanced to the second reading in the parliament and will increase the corporate income tax rate from 19 to 23 percent and the income tax on private individuals to 25 percent on incomes above a set level, the non-profit sector would be assigned a higher sum from paid taxes than was originally planned. The ministry also pointed out that the compromise arose out of the necessity to consolidate the public finances in order that the state budget deficit is reduced to below 3 percent next year.

The third sector, i.e. non-profit and non-governmental organisations, did not share the ministry’s optimism. Marcel Zajac from the Centre for Philanthropy told The Slovak Spectator that the views of the ministry and the third sector differ in their estimates of future developments, and pointed to NGOs’ experience from the last two years, 2010 and 2011, when companies had to make a donation in order to assign the full 2 percent of their corporate tax (alternatively, they could assign just 1.5 percent without a donation).

“We perceive from these numbers that the biggest drop is explained by the difference between the fattest year and the arrival of the crisis, i.e. from €39 million to €28 million, but the further drop to €25 million is due to the change in the assignment mechanism,” Zajac told The Slovak Spectator.

Zajac specified that during the last two year s only 10 percent of companies had used the option to increase their assignment to 2 percent of paid taxes by donating their own funds. The amount of funds that these companies allocated to NGOs was between €10 million and €11 million.

“This indicates that it is big corporations in particular that made the donations,” said Zajac, adding that, unlike the Finance Ministry, the NGOs did not expect that big companies would continue to donate their own funds if the assignment scheme changed to require a 0.75-percent donation to assign 1.75 percent of taxes. He pointed out that for these companies the increase in the donation would amount to thousands of euros and that the current atmosphere of belt-tightening did not facilitate giving to NGOs. Moreover, many big donors are companies that the government has just burdened with additional taxes and levies, which could distract their shareholders from donating.
Hrica agreed, pointing out that companies would have had to increase their donations by 80 percent in order to assign the maximum amount, something which he said was unrealistic in the current economic climate.

Andrea Cocherová, the administrator of Nadácia Orange, a foundation launched by mobile phone operator Orange Slovensko, shared these concerns and supported sticking with the current set-up.

“The amount of donation provided is affected by several factors, for example the development of revenues or the decision of shareholders,” Cocherová told The Slovak Spectator. She said she believed that if companies had to donate more to assign the maximum amount, the number of companies which could afford to do this would decrease, and that this would in turn significantly reduce the volume of funds allocated for public-beneficial purposes.

Back in 2009, when the assignation-donation scheme was adopted, the plan was for it eventually to be replaced by new fundraising mechanisms. But this has not happened. This was the theme of a recent message from the Finance Ministry recommending that the third sector search for other financial instruments to raise funds and make better use of existing tools, for example the existing mechanism to hold charity lotteries.

With respect to charity lotteries, Zajac said that NGOs can launch them and use the revenues to support their activities.

“However, launching a successful lottery currently requires a huge investment,” said Zajac. “The mechanism exists, but nobody uses it. Maybe [they will] in the future, under a different economic situation.”