THE TIMING of the 14th annual International Film Festival Bratislava (IFF), which took place between November 9 and 17, worked to the festival’s advantage, as the organisers were able to obtain winning films from this year’s previous film festivals. The result was that this year’s competition was strong, making it difficult for film enthusiasts to choose which films to see, as proven by the long queues outside the ticket windows. 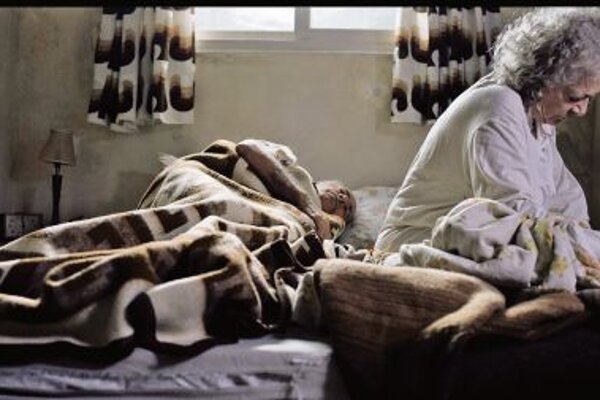 THE TIMING of the 14th annual International Film Festival Bratislava (IFF), which took place between November 9 and 17, worked to the festival’s advantage, as the organisers were able to obtain winning films from this year’s previous film festivals. The result was that this year’s competition was strong, making it difficult for film enthusiasts to choose which films to see, as proven by the long queues outside the ticket windows.

“There are several films on the schedule which are important in terms of their distribution,” Radovan Holub, one of the festival’s programme managers, told a press conference. “Many of the selected films are political. We cannot decide to screen apolitical films, as today’s world is so complicated that every second movie concerns some kind of global problem. That is the reason why I can appreciate, for example, a Bollywood-style film made in India, which is totally apolitical for a change, or the ‘Antidepressants’ section [of the festival].”

Another programme manager, Nenad Dukič, film critic for Radio Belgrade and film correspondent for the BBC World Service and Berlin radio RBB, agreed with Holub: “Most of the films, especially in the competition, are social, putting an individual into the context that surrounds him or her. We didn’t choose the films because of the thematic elements. First of all, films were chosen due to their cinematic qualities; but when I made the list I realised that almost all of them involve this theme.”

He added that if there was any connection among the competition films, it was that young film-makers are trying to express themselves in a forceful way, depicting characters who, like them, are young, and are searching for crucial answers, trying to find their own place in society, stuck in a vicious circle with no way out. Otherwise, he added, the films are completely different, especially in terms of production and technique.

This holds true for most of the winning films. The Grand Prize for Best Film went to Colombian film La Sirga. Directed by William Vega, the film tells the story of a young woman, Alicia, who, when trying to flee the armed violence that has claimed the lives of those closest to her, ends up in the secluded village of La Sirga, only to find that the violence has found its way there, too.

The Israeli film Epilogue (Hayuta ve Berl), by young director Amir Manor, received three awards: Best Actress (Rivka Gur), Best Actor (Yosef Carmon) and an award from the Student Jury “for a sensitive reflection of old age in contemporary Israel with a balanced dose of tragicomedy”. The story depicts an elderly married couple, Hayuta and Berl, whose son left to live in the US, and whose health and finances are deteriorating. Hayuta and Berl devoted their lives to contributing to Israeli society, having worked selflessly in a kibbutz without thinking about their own prospects and financial reserves, only to find themselves mocked and left behind by the society they sacrificed their youth, energy and ideals for. After acknowledging this state of affairs, the couple decides to cut their dim prospects of being reliant on the social system and the mercy of strangers, and to embark on their last one-way trip.

Manor said the story was inspired by his grandmother. “She said ‘we used to live modestly, we didn’t need a lot of money; we just wanted to express ourselves. All we needed was the feeling to belong somewhere, to feel one’s identity’,” the director quoted her, continuing in his own words: “Those people came to Israel from Europe to build the new Jewish experiment, the new state, and afterwards, they were thrown away and have been neglected. They gave everything they had to the country, without ever thinking about what the country would give back to them.”

Manor said that reactions to the film in Israel have been strong, mainly due to the economic situation, “with the Israeli economy now being not for the people but against them”. People have taken to the streets, and so the response to the film has been similarly immense, he said.

As for the actors who received awards for their performances in the film, Manor said they were originally theatre actors, adding that when he saw Carmon’s face he saw in it the whole map of Israel.

Other films that received awards include Sofia’s Last Ambulance (Poslednata lineika na Sofia) for Best Documentary; Malody for Best Short Film; Oh Boy! (Ty kokso!) took the FIPRESCI Jury Award; Epilogue claimed the Fedeora Jury Award; In the Shadow (V tieni) won the Slovak Feature and Animation Competition by the Fedeora Jury; and the Slovak Made in Ash (Až do mesta Aš) took home the award for Best Slovak Feature Film. The Film Europe Award for the most successful presentation of a Slovak film abroad went to actress Gabriela Marcinková, and the award for special contributions to Slovak cinematography went to actor Štefan Kvietik. Awards for artistic excellence in world cinematography went to Serbian film director Goran Paskaljevič, who was also the chair of the festival jury, and Czech director Jiří Krejčík.

Of the many films that confronted social issues, Hold Back (Rengaine), by French/Algerian director Rachid Djaidani, used documentary techniques to bring a sense of authenticity to its subject matter. The film tells the story of a traditional Algerian family in France, when the only sister, Sabrina, falls in love with Darcy, a black African Christian. After her 40 brothers and step-brothers learn about her intention to marry Darcy, the oldest brother, Sliman, does his best to dissuade her –

although he himself secretly breaks the rules and traditions, without finding Sabrina’s courage to do so openly. The film’s screening was attended by the actor playing the oldest brother, Sliman Dazi. He told The Slovak Spectator that Djaidani sought to abandon the usual cliché of white French hating non-white immigrants, and instead pitted several different ethnic groups against each other, and that his underlying message was that “we are all French, regardless of colour, ethnicity, we were born in France”.

One of the biggest perks of film festivals is the chance to discuss with the directors, performers, producers and programme directors their impressions of the films. The time allotted for post-
screening discussions was severely limited this year, however, due to attendees queuing outside for the next film. Perhaps the long roster of great names who were invited to Bratislava from all over the world, including directors like Liu Shu, Paula Fabian, Belmin Solyemez and too many others to list, could be allowed more than just a few minutes of discussion time after each screening.

Despite this drawback, the films featured at this year’s festival are worthy of a wider audience, and will hopefully be shown in cinemas and film clubs throughout Slovakia.