THE OFFER of a 5-percent pay hike and tenure – i.e. guaranteed employment – for teachers aged 55 and older, confirmed by the government after marathon negotiations with trade union leaders, has failed to satisfy Slovakia’s frustrated public-school teachers. If the government of Robert Fico does not improve its offer, teachers will start a countrywide relay strike from December 11 to December 14, the leaders of the Trade Unions of Employees of the Education Sector and Science (OZ PŠaV) have threatened, although at the time of writing their strike action remained suspended. However, on December 6, Robert Fico announced that his government would increase the salaries of teachers and non-pedagogical employees in the education sector by 5 percent regardless of whether the unions agree to or reject the deal, the Sme daily reported. 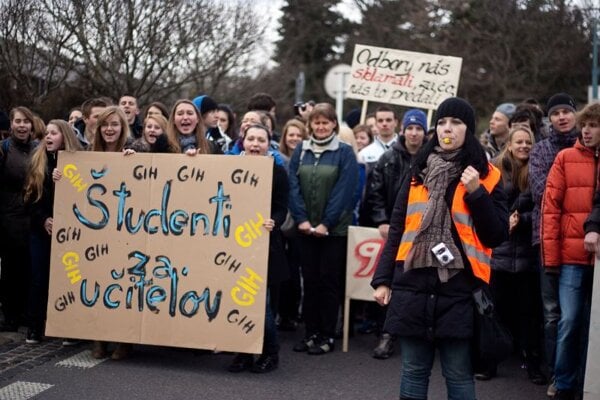 THE OFFER of a 5-percent pay hike and tenure – i.e. guaranteed employment – for teachers aged 55 and older, confirmed by the government after marathon negotiations with trade union leaders, has failed to satisfy Slovakia’s frustrated public-school teachers. If the government of Robert Fico does not improve its offer, teachers will start a countrywide relay strike from December 11 to December 14, the leaders of the Trade Unions of Employees of the Education Sector and Science (OZ PŠaV) have threatened, although at the time of writing their strike action remained suspended. However, on December 6, Robert Fico announced that his government would increase the salaries of teachers and non-pedagogical employees in the education sector by 5 percent regardless of whether the unions agree to or reject the deal, the Sme daily reported.

The 5-percent hike will add a monthly €50 to €60 to teachers’ average gross pay. To get the cash, other ministries will have to make cuts in their budgets, Fico added, according to the SITA newswire. The prime minister also said he regretted that no agreement has been reached with the unions but said their demands were unrealistic.

OZ PŠaV leader Pavel Ondek responded to Fico’s announcement by saying that he did not consider the decision to be a fulfilment of the teachers’ demands. He refused to comment further on the unions’ next steps by the time this edition of The Slovak Spectator went to print.

Meanwhile, the board of the Confederation of Trade Unions (KOZ), the national umbrella organisation for trade unions, called on their colleagues in the teachers’ unions to accept the government’s offer, SITA reported on December 6.

“It is possible that in the event of disagreement, protests will continue also next year,” Ondek said earlier in the week, as quoted by SITA.

The teachers’ unions are now demanding that each year between 2014 and 2016 the amount of money spent on education should increase by 0.3 percent of GDP.

Along with a 5-percent gross pay hike and tenure for over-55s, the government also proposed that teachers could get an additional 2.5-percent salary increase thanks to a measure that would ensure that 100 percent of the extra money received by schools from the Ministry of Education goes exclusively on teachers’ salaries, Education Minister Dušan Čaplovič said on December 3, as reported by Sme. Currently, local and regional government administrators can keep 10 percent of the money. The cabinet approved the 100-percent rule on December 6.

If it were to be accepted, the measure would become effective as of January 2013. In practice it would mean that a teacher with an average gross monthly salary of €780 would receive about €58 more each month, according to Sme.

Teachers’ incomes would rise further in 2014-2016 using funds released by reductions in teacher numbers as a result of a “personnel optimisation” process, said Ondek, as reported by Sme.

The New School Trade Unions (NŠO), an organisation that emerged in protest at the conduct of the OZ PŠaV in negotiations with the government and the decision to suspend the national strike on November 28, were quick to criticise the government’s offer. They maintain that finances for schools should be transferred without any mediators, directly from the state coffers to the schools, NŠO head Ľudovít Sebelédi said, as reported by SITA. They are also calling for the normative financing of schools per pupil to be reconsidered.

The NŠO also opposes the government’s refusal, citing the financial crisis, to guarantee pay rises in 2014-2016.

“The priorities of the NŠO remain that 6 percent of GDP should go to the education sector and that the tariff salary of a teacher should be increased to 80 percent of the average salary of a person with a university education in Slovakia, both within three years,” Sebelédi said, as quoted by SITA.

Meanwhile, a group of activists, including experts on education as well as prominent Slovak artists, actors and television personalities, wrote an open letter addressed to Education Minister Čaplovič and to union leader Ondek in which they complained that the strike should not be narrowed down to the question of pay.

“The discussion about the increase of salaries has, unfortunately, led us into a dead end and we have reason to worry that more young teachers will leave the sector and that the older generation of teachers will remain bitter and drained of energy,” the letter, dated November 29, reads. “Such a scenario would be a serious blow for the future of education in Slovakia.”

Instead, the discussion should focus on how to make the job of a teacher more attractive by 2020 so that the best, most qualified people become teachers, according to the initiative behind the letter, entitled Teacher 2020. The letter was signed by the head of the Slovak Chamber of Teachers, Mária Barancová, Association of State Gymnasiums’ Headmasters head Pavel Sadloň, and others.

Representatives of the Teacher 2020 initiative met Minister Čaplovič in late November and put forward three demands: that excellent students should study teaching, since only 1 percent of students currently opt for teaching as their first choice; that an annual increase in the finances flowing into education and into teachers’ salaries should be guaranteed, with the aim that Slovak teachers earn between €1,200 and €1,600 per month, based on the average salary of people with a university education in Slovakia; and that the schools network and the number of teachers should be optimised – i.e. reduced – to reach the OECD average.

Čaplovič and representatives of regional governments, who act as administrators of schools in their regions and municipalities, have opined that there are far too many teachers in the system, given the demographic trends that show the numbers of children dropping. They hinted at possible layoffs among teachers, but did not specify a timetable, or how many teachers would be laid off, according to Sme.

“The Žilina Self-Governing Region, which administers 67 secondary schools, has recorded a drop in the number of students by 1,957 compared to last year, while the number of teachers was left unchanged,” said the region’s president Juraj Blanár (Smer), who is responsible for the education sector in association with the country’s seven other self-governing regions, as quoted by Sme.

In Slovakia there are 14.8 pupils per teacher on average. In the OECD only the UK, Germany, the Netherlands, Estonia and Ireland have lower figures.

The decision to suspend the strike came on the third day, November 28, to provide space for negotiations with the government. By November 29, OZ PŠaV had still not reached any definite agreement with the government, but published a statement on its website claiming that support for the strike had dropped significantly in the regions. However, the NŠO called the suspension of the strike a waste, and teachers at several schools around Slovakia vowed to continue striking.

“We regard such a step as an unprecedented misuse of the strike potential and also as an injustice for those school facilities and teachers who, despite their poor wages, had resolved to remain on strike for more than three days,” said Sebelédi, as quoted by SITA.

On Friday November 30, more than 1,000 disgruntled students and teachers from 12 schools gathered in front of the Government Office in Bratislava and marched towards parliament.

Despite the official halt in the strike, about 20 schools, of which 17 were in Bratislava, wanted to continue striking on December 3, with representatives of the schools scheduled to meet to discuss further steps, according to SITA.

Two local schools in Bratislava started a so-called relay strike on Monday, December 3. Along with other schools throughout Slovakia they voiced their disagreement with the trade unions’ decision to suspend the indefinite nationwide strike, according to SITA.

“We did not [stop striking] mostly because we wanted to look into the mirror in the morning [and say that] I am a teacher and no one will […] manipulate me, us,” Eva Horníková, deputy headmistress of the elementary school on Karloveská Street in Bratislava, told SITA.