THE BEGINNINGS of the Visegrad Group (V4) lay in the efforts of its four central European member countries to join the wider European integration process. Their aim of joining the European Union was seen as another step forward in the process of removing artificial borders in Europe by means of mutual cooperation. Twenty-one years since its launch, the V4 remains an important grouping with a strong voice respected by powerful EU players. Not only does it focus on issues of particular interest to its members, but it also serves as a bridge between the EU and countries beyond. 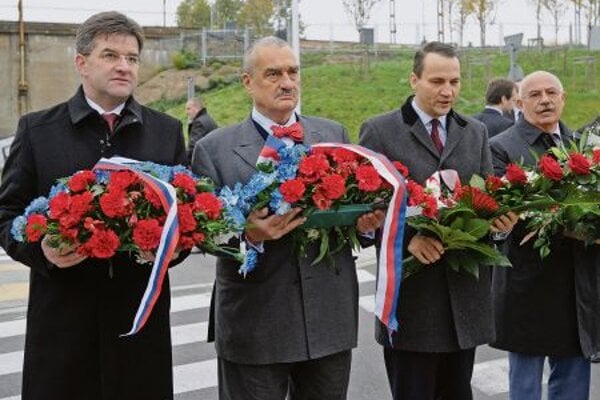 THE BEGINNINGS of the Visegrad Group (V4) lay in the efforts of its four central European member countries to join the wider European integration process. Their aim of joining the European Union was seen as another step forward in the process of removing artificial borders in Europe by means of mutual cooperation. Twenty-one years since its launch, the V4 remains an important grouping with a strong voice respected by powerful EU players. Not only does it focus on issues of particular interest to its members, but it also serves as a bridge between the EU and countries beyond.

“The V4 fulfils an important task as an appropriate platform for regular political and expert consultations and coordination of foreign policy viewpoints and attitudes of the V4 countries within the actual questions and issues of European policy,” the Slovak Foreign Ministry told The Slovak Spectator.

The growing importance of the V4, which groups Poland, Hungary, the Czech Republic and Slovakia, in the European arena has been proved by several successful cooperation projects, among which participation in international organisations such as NATO and the European Union are the most visible achievements.

EU partners, for example, praise “the constructive, responsible and transparent activities of the V4 within the processes and discussions in the EU” which contribute to “improving the status of the EU and pragmatic solutions to some acute issues and problems which we face together”, the Foreign Ministry stressed.

The fact that the prime ministers – or other high level representatives – of all four countries typically meet before important EU summits to discuss their stances and attitudes shows that they try to coordinate their activities and “in some way form the policies of the EU, including the common foreign and security policy, energy policy or economic policy”, Tomáš Strážay of the Research Center of the Slovak Foreign Policy Association, a think tank, told The Slovak Spectator.

“Moreover, there is a tendency that these four countries will be joined by other ones, either from southern Europe, like Bulgaria and Romania, or Baltic countries, depending on the issue,” he said.

Yet Strážay stressed that such activity has to “concentrate on areas of common interest” and “fit into the list of issues with which the EU currently deals and which resonate also in other EU countries”.

Strážay also pointed to the fact that the four countries have different opinions on current changes to the European Union, saying that the countries are “in different orbits since Slovakia is the only V4 country which adopted the common currency, the euro”. Moreover, while Poland, Hungary and Slovakia supported the fiscal pact, the Czech Republic rejected it.
“Despite holding different attitudes towards a number of issues, the V4 countries were able to make a deal over questions of strategic interest, and will hopefully continue to do so also now, even regarding the ongoing changes in the EU,” Strážay added.

One of the biggest challenges the V4 faces at the moment is the discussion over EU’s budget framework for 2014-2020. The budget is an important tool which can help address the difficult economic situation, according to the Foreign Ministry.

“We know that at the time of consolidation of national budgets the budget of the EU is one of a few tools the member states can use to stimulate [their] economic growth and employment,” the press department of the ministry told The Slovak Spectator, adding that it is now important to join the discussion.

Strážay added that the V4 countries, which are also members of the informal Friends of Cohesion Policy group, will try to maintain funds allocated for cohesion policy at least at the current level, since they support regions with weaker economies.

The V4 countries do not focus only on the EU, but are active in its foreign policy and the policy of broadening the union, with a special focus on the western Balkans and developing relations with countries outside the EU such as members of the Eastern Partnership, i.e. Armenia, Azerbaijan, Belarus, Georgia, Moldova and Ukraine.

The V4 is not a closed society, but “is open and well aware of its responsibility towards [its] neighbours and partners, who are interested in our experience of transformation [into democratic societies], know-how of regional cooperation and, of course, the kind of training and experience of integration into the EU and NATO”, the Foreign Ministry stated.

The fact that Croatia will join the EU next year will fulfil one of the priorities of the V4, Strážay added.

One of the most ambitious projects being prepared at the moment is the establishment of a common policy in the area of defence and security. Though there have been several attempts to broaden this kind of cooperation, for example a plan to modernise old, Warsaw Pact-era helicopters or the establishment of a Czech-Slovak-Polish tank brigade with headquarters in Topoľčany, none of these has been really successful. While the former did not take place, the latter was halted after three years, Strážay said.

The recent plan of cooperation, the so-called DAV4 project, targets joint cooperation in various military and defence projects, with a focus on the biggest strengths of individual countries. The countries also plan to establish their own battle group within the EU’s defence structures which should be active as of 2016.

The Foreign Ministry said that the whole project is based on the idea that “one of the ways to moderate the impacts of the economic crisis is international cooperation which, most of all, offers the possibility of more effective use of financial resources”.

“The project was made with the aim of identifying fields of defence cooperation that would be acceptable from a political point of view, advantageous from a financial point of view, and useful from a military point of view,” the Foreign Ministry press department explained.

The ministry added that V4 countries can benefit from their proximity and the similarity of their “strategic culture”, i.e. the question of perceiving the threats and usage of power, shared institutional frameworks, as well as their level of socio-economic development and armed forces modernisation. The proposed cooperation projects “respond to current existing needs and the shortcomings with which the countries will have to deal in the future”, the ministry added.

Strážay assumes that the aim of establishing a battle group will take some time to realise, but that there is a chance it will be well-prepared and realisable. He also praised the fact that it will be led by Poland, which currently contributes a bigger share of its GDP to defence that the other three.

When it comes to other areas of economic cooperation between the V4 countries, both Strážay and the ministry emphasise the area of energy policy, especially after the gas crisis which occurred at the beginning of 2009, when Russia stopped deliveries of natural gas to Ukraine (and hence onward to much of central Europe).

The fact that households in several European countries went without gas for nearly two weeks showed that dependence on a single supplier of natural gas was a strategic risk.

A regional initiative by the V4 countries regarding north-south interconnections in central and south-eastern Europe was adopted by the European Union and became one of its priorities in the area of energy policy, Strážay said.

Strážay also mentioned the close cooperation of the V4 countries in discussions over climate-energy package, while the Foreign Ministry stressed cooperation in the area of research and innovation, tourism and regional development as the main fields of economic cooperation.