Let it Roll through the borders

SOME might not think that winter is the best season for music festivals. However, the winter edition of drum and bass festival Let it Roll might dispel such notions, even more so given that over the course of its existence it has expanded into three countries. Bratislava will host the Let it Roll event on January 19, 2013, with headliners such as Calyx&TeeBee and Culture Shock, while the full line-up is yet to be announced. The Czech Republic will hold its winter edition of the festival on February 15, 2013 in Prague. 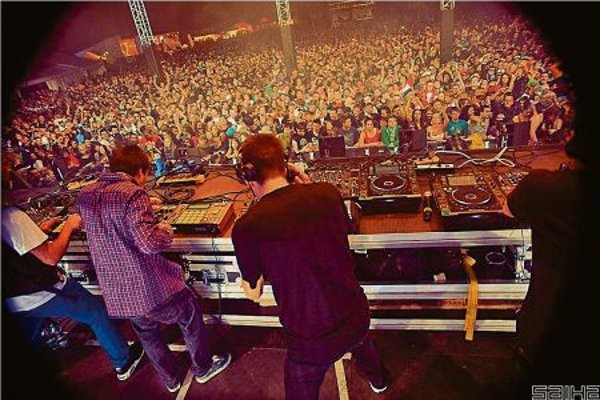 SOME might not think that winter is the best season for music festivals. However, the winter edition of drum and bass festival Let it Roll might dispel such notions, even more so given that over the course of its existence it has expanded into three countries. Bratislava will host the Let it Roll event on January 19, 2013, with headliners such as Calyx&TeeBee and Culture Shock, while the full line-up is yet to be announced. The Czech Republic will hold its winter edition of the festival on February 15, 2013 in Prague.

The idea to organise a festival for lovers of electronic music originally germinated in the Czech Republic in 2003, before eventually crossing the border into Slovakia.

“Literally, we accidentally mentioned the festival to our Czech friends, who were organisers of the Let it Roll festival,” recalls Jozef Šiarik, the PR manager of the Slovak version of festival, adding that it seemed preferable to bring to Slovakia an established brand that fans here already know.

The joint Czech-Slovak project Let it Roll has won the hearts of many fans even outside the Czech Republic and Slovakia. When the Polish organisers joined in, the festival gained a truly Visegrad Four character.

“Fans can experience their favourite music festival several times a year and venues are selected systematically so as not to go outside a 300 km range,” said Šiarik, adding that this makes transportation more manageable for the participants.

From its early stages in 2003, when the festival was attended by a smaller group of young people, it has since grown into a 3,000- to 4,000-strong summer festival in Slovakia and Poland. In the Czech Republic, the festival is attended by over 10,000 electronic music fans. The winter edition of the event is about half the size.

“Let It Roll is the largest event of its kind in each of the three countries and we think that we are on track to develop it even further,” Šiarik said when talking about the festival’s prospects.
The team of organisers is made up of two representatives from each of the involved countries, while cultural similarities between the Visegrad countries make for smoother communication, according to the organisers.

“Mostly it is about creating a positive trade-off in organising festivals in different versions based on specific options,” said Šiarik, adding that the like-mindedness of the organisers helps.
Let it Roll focuses on the genre of drum and bass, which currently enjoys considerable commercial success and is ranked along with trance and techno as being an indispensable part of every electronic music festival. Many artists who had already been performing at similar events, like Daniel Stein, who performs as DJ Fresh, have begun performing at this festival as well.

“We have succeeded in bringing in festival artists, who a few months [after their initial performance], literally broke into the commercial sphere and their ticket prices skyrocketed,” said Šiarik, referring to DJ Fresh.

Stein is an English drum and bass producer and DJ, who is mostly known for working with Darren White, Jason Maldini and Michael Wojcicki in a project called Bad Company.

Bad Company, a world famous drum and bass group, has achieved significant commercial success and has long been selling out concerts. DJ Fresh presented the first Let it Roll, and since then his career has taken a dizzyingly successful turn.

“I am most attracted to the music and the massive line-up that they have every year. And they always have the biggest names on the scene,” said Veronika Košinová, a 24-year-old fan from Prešov. Martina Rattayová, a 22-year-old from Bratislava, agrees, suggesting that the festival always offers a “line-up full of the world’s best performers”.

Andrej Malík, a 24-year-old from Bratislava who attended two winter editions in Slovakia and in the Czech Republic, said he was happy with both, adding that “I would not want the organisers to change anything”. 26-year-old Matúš Baša from Bratislava said that Duchonka, where the Slovak edition takes place, has always been a satisfying experience.

As for the town where the Slovak Let it Roll occurs, the municipality is pleased with the attention the festival has brought to it.

“This festival is definitely an asset to our community and recreational area, Duchonka,” says Katarína Bruchatá, an economist for the nearby municipality of Prašice, adding that the festival has brought more visibility to the community, and that there are a lot of people who come for Let it Roll and return after the festival.

Furthermore, Bruchatá appreciates the revenue that the festival brings in the form of taxes for accommodation and the leasing of the estate to the organisers. She adds that the festival raises awareness of the community among both Slovak and foreign attendees.