THE IMPRESSION that döner kebabs are the most typical Turkish dish is actually incorrect, suggests Gülhan Ulutekin, the Turkish ambassador to Slovakia, who is quick to offer ‘sarma’, grape leaves stuffed with a mixture of minced meat and rice; cacik, a yogurt-cucumber dish which has many variations throughout the region and pilav, a simple but popular rice side dish, as examples of dishes that are just as common as kebabs.

Related: Turkish cuisine I Appetizer I Soup I Main dish I Dessert I Other cuisines 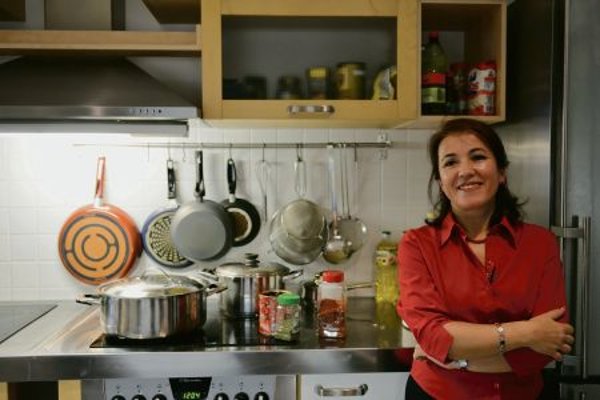 “I think I can say Turkish cuisine is one of the three or four most popular cuisines in the world,” Ulutekin says while at her kitchen table in Bratislava, in front of the colourful ingredients used for preparing the ‘sigara böregi’, an appetiser of cigarette-shaped pastries; karniyarik, a main dish involving eggplant stuffed with minced meat and tomato, and orange revani, an orange-flavoured cake made with semolina.

Ulutekin, however, admits that some people’s experience with Turkish cuisine may be limited to the kebab, which is becoming increasingly popular abroad.

“It seems that the döner kebab is so popular that at some places it is competing with McDonald’s,” Ulutekin said. “But I observed that sometimes the impression is that Turkish cuisine consists only of kebabs. But I would not call the döner kebab our national dish, because there are other dishes that are at least as popular as döner kebab in Turkey.”

Yet, Ulutekin adds that due to the wide variety of dishes found in all the different regions of Turkey, determined by the flora or fauna of the particular part of the country, it is rather difficult to pick one or two national dishes. In Turkey’s western and northern coastal regions dishes involving fish are quite common, and anchovies are prepared in a variety of ways; in the eastern inland regions, kebab is more typical.

Nevertheless, the Ezo Bride Soup, which Ulutekin and her cook prepared for the Cooking with Ambassadors programme, would be served anywhere in Turkey. To illustrate the rich tradition and symbolism behind some of the dishes, Ulutekin says that there is a popular tale behind this rich hearty red lentil and bulgur soup.

“Ezo was the name of a real person, who invented the soup to impress her mother-in-law,” Ulutekin said explaining the legend, according to which a woman named Ezo married badly twice, with her second marriage taking her close to Syria where she became homesick for her native village of Dokuzyol, and created this soup in an attempt to please a difficult mother-in-law.

According to Ulutekin, many Turkish dishes are influenced by some of the neighbouring cultures and countries, and it would be impossible to discuss Turkish cuisine without acknowledging influences from the Balkans, Central Asia, the Mediterranean and different parts of the Middle East, “which is also due to the Ottoman heritage”.

“Obviously, it is a give-and-take process,” Ulutekin said, adding that with some Turkish dishes it is hard to precisely determine who influenced whom over the course of history.

Ulutekin stresses that Turkish cuisine involves a lot of vegetables, which is perhaps proven by the fact that eggplant dishes are quite popular there: for example karniyarik, or “split belly”, is eggplant cut open and stuffed with a mixture of ground beef and tomatoes.

To dispel any concerns of anti-smoking activists, the ‘sigara böregi’ or ‘cigarette pastry’, which is typically served as ‘meze’, an appetiser eaten before the main dish, has nothing to do with smoking. The small rolls of ‘filo’, or dough leaves, are stuffed with cheese and parsley. Served hot and crispy, they are another example of the kind of dishes that Ulutekin serves to her guests to demonstrate the richness of Turkish cuisine.

“You can eat the cigarette pastry on Sunday morning, when you are having your rich, long late breakfast,” she said, adding that it is quite popular in Turkey.

The Ezo Soup, the pastry and the ‘split belly’ can be found in every household, “no matter how modest or how high the family’s income is,” the ambassador explained.

When asked about any similarities between Turkish and Slovak cuisine, Ulutekin notes that Turkey has dumplings as well, which are quite popular in the central part of the country.