No significant changes in ARRA ranking

THE INCREASING joblessness of university graduates and the ongoing problem of the so-called PhD paradox are among the main findings of the annual ranking of Slovak higher education faculties prepared by the Academic Ranking and Rating Agency (ARRA), which this year covered 109 Slovak university and college faculties. The ARRA results generally confirmed the positions of the traditional leaders in the evaluated categories. 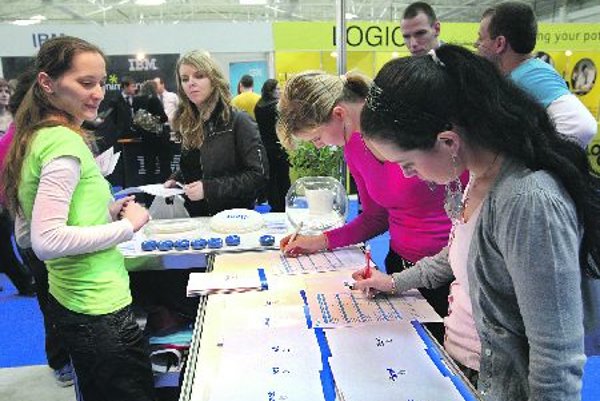 THE INCREASING joblessness of university graduates and the ongoing problem of the so-called PhD paradox are among the main findings of the annual ranking of Slovak higher education faculties prepared by the Academic Ranking and Rating Agency (ARRA), which this year covered 109 Slovak university and college faculties. The ARRA results generally confirmed the positions of the traditional leaders in the evaluated categories.

The jobless rate among Slovak university graduates increased by nearly 0.7 percentage points year-on-year to 4.5 percent, ARRA found. The highest increase was among graduates of agricultural faculties, some of which recorded an annual increase in joblessness of nearly 4 percentage points. The only exceptions were art, medical and law faculties, which reported a slight fall in the number of unemployed graduates, the agency’s report found.

“The increase in the joblessness of graduates is probably related to the overall economic situation and subsequent profiling of interest of companies in particular groups of graduates,” Eva Pilát from ARRA told The Slovak Spectator.

Yet the current unemployment numbers for graduates represents continuation of a year-on-year trend in the growth of graduate unemployment. If we want to say what the reason for such a situation is, we need to watch the indicators for longer, Pilát added.

A continuing problem for several schools is the so-called PhD paradox. This is that faculties have more PhD students than they actually need to cover their research activities, the ARRA report reads.

On the other hand, ARRA praised the growing internationalisation of studies at some Slovak schools. Three medical faculties which are part of Comenius University in Bratislava reported a high number of foreign students, constituting between 24 and 29 percent of the student body. However, this was something of an exception in Slovakia’s university sector, since on average faculties reported significantly lower numbers of foreign students.

Some up, some down

The ARRA rankings have been published since 2005. This year the agency divided schools into 11 categories. The rankings were based on publicly accessible data, such as those from the Institute of Information and Prognoses of Education, the statistics of the Education Ministry and the international Web of Knowledge (WoK) database of scientific works, the ARRA report states.

Overall, this year’s outcome showed little change compared to last year’s. For example, the University of Veterinary Science in Košice led the group of agricultural faculties, the Faculty of Chemical and Food Technology at the Slovak University of Technology in Bratislava was first among technical schools and the Jessenius Medical Faculty of Comenius University in Martin placed top in the medical group, the ARRA report showed.

The ranking also included six faculties of private colleges which fulfilled the requirement of ARRA and published information on their websites which is not usually made public. However, the placement of the schools, namely Saint Elizabeth’s School of Health and Social Work in Bratislava, the International School of Management in Prešov, the Central European University in Skalica and the Pan-European University in Bratislava, was not complete since the information provided was not verified by any third-party institution, ARRA stressed in its report.

One of the disadvantages that private schools face in the ARRA rankings is that they do not have access to grants that are usually available to public schools. But despite this the schools placed relatively well, with none of them coming last in any category. By contrast, some even received top rankings, especially in the ‘education’ and ‘attractiveness of education’ categories, Pilát told The Slovak Spectator.

The evaluation of faculties is based on two main areas: education and research. This year, however, ARRA slightly modified the methodology it used to judge criteria such as the number of publications per researcher and the number of citations per publication in some groups. While in previous years ARRA took into consideration publications and citations which appeared in the WoK database over the previous three years, this year it changed the scope to four years. Moreover, the agency modified its calculation of success in obtaining grants, the report reads.

These modifications, however, did not affect the final placement of faculties, Pilát stressed.

“The reason for the methodological changes was mostly to normalise the effect of the very low number of non-zero data in some cases, [as a result of which] disproportionately big differences in the total number of points appeared [in the rankings],” she added.

Most changes took place in the ranking of technical faculties, partly because of the size and the very small differences between those assessed. Pilát noted that there is a difference between changes that happen in small and big groups since “a move by one place [in small groups] might be more distinct than a move by five places in a group with a higher number of faculties”.

“It is necessary to realise that every ranking gives a snapshot of the faculty of the university and its position among other universities explicitly through the optic of set criteria, which means that by using different criteria the order in the list might be different,” the report reads.

As with the previous education minister, Eugen Jurzyca, the current management of the Education Ministry has also taken a positive view of the results of the ranking. They can help students-to-be pick the faculty they want to study at, ministry spokesperson Michal Kaliňák told The Slovak Spectator.

Yet, the main objective of the ARRA ranking is not only to “provide the public, and in particular applicants for university studies, with a survey [which is] compiled based on readable and generally clear criteria” to help them decide to study at a particular school, but the ranking should also be used to initiate competition between the institutions offering higher education, as well as effect positive changes in the Slovak education sector, the report reads.

The Education Ministry says that there are three criteria that might be seen as interesting when preparing changes for the university education sector: the number of professors and associates per 100 students of daily and external studies, the share of jobless graduates among the total number of graduates, and the average number of citations per publication in the database.

For more detailed information about the final ranking go to www.arra.sk