Gorilla heralds change at the top

THE SINGLE most significant change Slovakia experienced in 2012 was the landslide victory of Robert Fico in the March 10 general election, which left his Smer party with 83 seats, and hence an overall majority of 16 in the 150-seat parliament. Smer, which won 44.41 percent of the vote, has painted Slovakia’s political map red – the party’s campaign colour. It emerged in first place in an astonishing 77 of the country’s 79 districts. Smer even took the capital, Bratislava, with 30.69 percent of the vote, double the support of any of its political rivals. 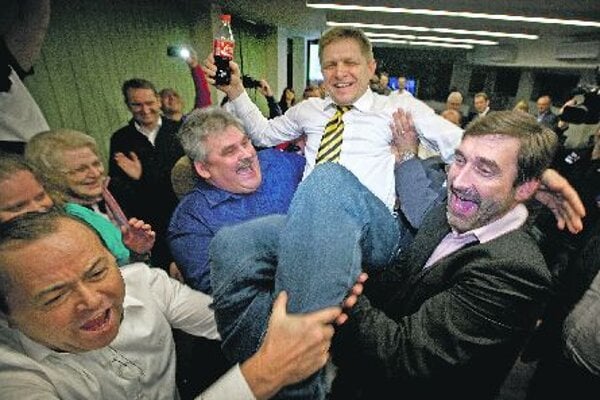 THE SINGLE most significant change Slovakia experienced in 2012 was the landslide victory of Robert Fico in the March 10 general election, which left his Smer party with 83 seats, and hence an overall majority of 16 in the 150-seat parliament. Smer, which won 44.41 percent of the vote, has painted Slovakia’s political map red – the party’s campaign colour. It emerged in first place in an astonishing 77 of the country’s 79 districts. Smer even took the capital, Bratislava, with 30.69 percent of the vote, double the support of any of its political rivals.

Political analysts ascribed Fico’s massive victory to the effect of the Gorilla file, a leaked document which features purported transcripts from bugged conversations that imply high-level political corruption during the last government of Mikuláš Dzurinda in 2005-6; to the collapse last year of the right-wing government of Iveta Radičová; and to the large proportion – almost 20 percent – of votes that went to parties that failed to clear the 5-percent threshold.

Along with Smer, five other parties cleared the 5-percent threshold required to win seats in the 2012 election. The Christian Democratic Movement (KDH) and Ordinary People and Independent Personalities (OĽaNO) got 16 seats each, Most-Híd 13 seats, and the Slovak Democratic and Christian Union (SDKÚ) and Freedom and Solidarity (SaS) got 11 seats each. The overall turnout in the general election was 59.11 percent.

The election results, which sent the parties of the former centre-right ruling coalition into opposition, led to a number of changes with the potential to affect the labour market, business environment, health-care and education sectors, as well as the country’s pension scheme.

Speaking as the prime minister of Slovakia’s first single-party government since the end of communism in 1989, Fico said shortly after taking office on April 4 that he would not promise any “castles in the air” but rather a government programme that would be the result of intensive dialogue and work between government officials and a wide circle of social partners.

The new government wants a modern and thrifty state that intervenes in the economy only when reasonable and necessary, and will not pursue approaches that deform the market: this is how Fico pitched the cabinet’s programme statement before parliament. He declared that his government’s top priority would be consolidation of the public finances so that the country’s budget deficit is pushed below 3 percent of GDP in 2013, but he emphasised that this would not be done at the expense of poorer citizens.

Political analysts considered the non-partisan appointments of Lajčák and Borec as positive, with political scientist Ján Baránek adding that it was necessary to wait and see whether Fico’s signals about a new style were only a “wolf-in-sheep’s-clothing” approach or would become an expression of a new political culture, the SITA newswire reported in May.

Former finance minister Ján Počiatek went straight to the Ministry of Transport, Construction and Regional Development. Robert Kaliňák returned to his previous post as interior minister, as did Marek Maďarič as culture minister, while Dušan Čaplovič took the reins at the Education Ministry. Peter Kažimír, the former state secretary at the Finance Ministry is now the minister there. The country’s new defence minister is Martin Glváč, head of Smer’s Bratislava branch, and the Environment Ministry is in the hands of Peter Žiga, a former state secretary at the Economy Ministry and the head of Smer’s Košice branch. Former economy minister Ľubomír Jahnátek now leads the Agriculture Ministry and the new labour minister is Ján Richter, who served as Smer’s general manager.

While for some time it seemed that the creation of a top post for Ľubomír Vážny was uncertain, on November 26, the former transport minister was appointed deputy prime minister for investment. His responsibilities will lie mainly in the coordination of large investment projects with estimated costs of over €1 billion.

As for the leadership of the Slovak Parliament, Pavol Paška, Fico’s right-hand man, returned to his old job as speaker of parliament and now has two Smer deputies: the party’s regional head for Banská Bystrica, Jana Laššáková, and Renáta Zmajkovičová, another Smer deputy who previously headed the parliamentary mandate and immunity committee. For the opposition, Erika Jurinová of OĽaNO serves as deputy speaker along with Ján Figeľ, leader of the KDH. When it comes to the distribution of parliamentary committee chairs, Smer left nine to the opposition.

On May 3, President Ivan Gašparovič appointed Ján Valko, former head of the state-owned Nuclear and Decommissioning Company (JAVYS), to lead the Slovak Information Service (SIS) intelligence agency. Meanwhile Jozef Magala, SIS boss during the first Fico government, was given the cabinet’s nod to take the helm of the National Security Authority (NBÚ), which vets nominees for high political posts and issues security clearances.

In line with its earlier declarations, the government has eliminated the flat tax, made changes to the private pension savings scheme and the Labour Code, and Fico also has made the first steps towards accomplishing his plan to create a single public-health insurer in Slovakia, putting Slovakia’s two existing privately-owned public-health insurers on alert.