Jozef Čentéš, who was elected by parliament to be Slovakia’s next general prosecutor on June 7, 2011, has been waiting ever since for President Ivan Gašparovič to officially appoint him to the post. Gašparovič has received strong criticism from political ethics watchdogs as well as opposition parties for his reluctance to appoint Čentéš, who was elected in a ballot whose legitimacy has been confirmed by the Constitutional Court. 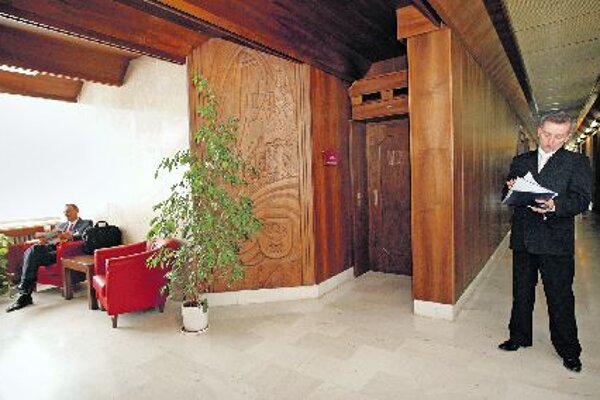 Jozef Čentéš, who was elected by parliament to be Slovakia’s next general prosecutor on June 7, 2011, has been waiting ever since for President Ivan Gašparovič to officially appoint him to the post. Gašparovič has received strong criticism from political ethics watchdogs as well as opposition parties for his reluctance to appoint Čentéš, who was elected in a ballot whose legitimacy has been confirmed by the Constitutional Court.

Over the course of 2012, the Constitutional Court dealt with several complaints pertaining to the appointment of general prosecutor. In March, the current opposition parties turned to the top court to inquire whether Gašparovič had the right to put off the appointment. The court delivered its verdict on October 24, saying that the president of Slovakia must “deal with” a proposal of parliament to appoint a new general prosecutor based on the 150th article of the Slovak constitution, and that if the candidate was elected in accordance with the law the president must either appoint him/her “within an appropriate time-frame” or inform parliament of his refusal to do so.

According to the Constitutional Court, the president can refuse to appoint a candidate only if the candidate does not meet the legal requirements for the office or there are “grave reasons” that cast doubt on the candidate’s ability to perform the job in a way that does not harm the authority of the institution of general prosecutor.

Yet, the court’s verdict did not bring Čentéš closer to his post, as the president said that he would wait for all the verdicts of the Constitutional Court pertaining to the appointment of Čentéš to be delivered and only then make his decision.

Čentéš himself filed a complaint in November 2011, asserting that his fundamental rights were violated when he was denied the right to take up the office of general prosecutor even though he was legally elected to the post by parliament. The court had not delivered a verdict on this complaint by the time this issue of The Slovak Spectator went to print.

The Constitutional Court earlier in 2012, on August 24, had cleared another obstacle in Čentéš’s path to the job when it turned down a complaint filed by Dobroslav Trnka, the former general prosecutor, who had sought to retain his position and who asserted that his right to equal access to public functions has been violated. He also argued that the results of a May 17, 2011, vote had been incorrectly tabulated and that parliament should have declared him the winner of that vote and submitted his name to the president for re-appointment. Trnka’s complaint was dismissed due to what Constitutional Court spokesperson Anna Pančurová called an “apparent illegitimacy and for having been submitted by an unauthorised person”, the TASR newswire reported.

Čentéš has several times argued that there was no reason preventing the president from appointing him to the post since his election was legitimate and any “hesitation only prolongs the current, in my opinion, unconstitutional, state”. Gašparovič’s critics also argued that the president’s inactivity has created a situation in which the General Prosecutor’s Office is without a proper leadership.

In the absence of an officially appointed top prosecutor, Ladislav Tichý heads the office. It has been making headlines recently due to a controversial real estate transfer enabled by Trnka, who now acts as Tichý’s deputy.

Police have charged the former director of the Senec cadastral office, Igor Svitek, with the crime of thwarting the tasks of a public official on December 5, for having approved the controversial transfer of ownership of the Glance House luxury residential development in Bernolákovo, a municipality near Bratislava, based on a letter sent by Trnka, thus sidestepping an embargo by the Special Prosecutor’s Office on any dealings with the building. Trnka has not resigned despite the verdict of his boss, Tichý, who said that Trnka had acted unlawfully by issuing a legal opinion that materially affected the disputed ownership of Glance House.

The case involves the construction and sale of Glance House which, thanks to Trnka’s letter, was reportedly transferred to Jana Šlachtová, a representative of CDI, a London-based company which has links to Marián Kočner, a controversial businessman also known to be on friendly terms with Trnka, according to Sme.