THOUGH Slovakia has recovered strongly from the global economic crisis and is weathering well the storm that has struck its main European trading partners, it still has a long way to go if it wants to consolidate its public finances. This is one of the main messages of the Economic Survey of the Slovak Republic presented by the Organisation for Economic Cooperation and Development (OECD) on December 6 in Bratislava. 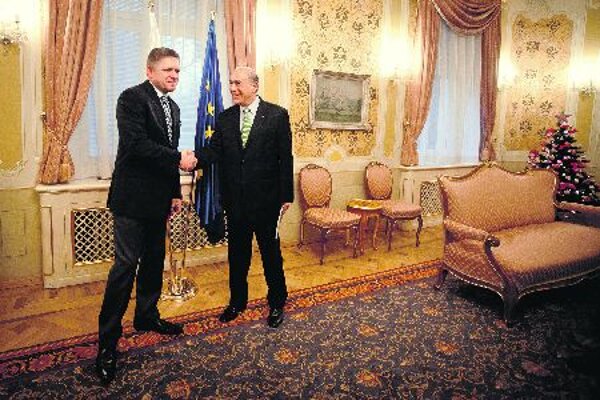 THOUGH Slovakia has recovered strongly from the global economic crisis and is weathering well the storm that has struck its main European trading partners, it still has a long way to go if it wants to consolidate its public finances. This is one of the main messages of the Economic Survey of the Slovak Republic presented by the Organisation for Economic Cooperation and Development (OECD) on December 6 in Bratislava.

“The Slovak Republic has one of the highest growth rates in the OECD and is seen as an attractive environment for foreign investment,” said Angel Gurría, secretary-general of the OECD, at the launch of the survey. “The road ahead is nonetheless full of challenges, notably identifying domestic drivers of growth and implementing policies for sustainable improvements in the labour market.”

Gurría also noted that weak domestic demand and the difficult external environment have reduced the forecast for the coming years, with growth projected at 2 percent in 2013 and 3.4 percent in 2014. The challenges that Slovakia must now confront are reducing unemployment, fostering long-term inclusive growth, and helping the unemployed, particularly young people, the long-term jobless and Roma, to find their way back to work.

While the Finance Ministry welcomed the findings of the OECD survey and said it confirmed their attempts to consolidate the public finances, analysts say that the country should pass another economic recovery measures.

The OECD report confirmed Slovakia will be one of the best-performing economies in the organisation, the Slovak Finance Ministry said in response to the survey. Moreover, the ministry identified with the recommendations, saying in many cases they are “valuable inspiration and comply with our ambitions”, according to the press release.

Yet, Ján Dinga, from the Institute of Economic and Social Studies (INESS), a think tank, said that it would be more reasonable if the government were to focus on decreasing wasteful and non-effective public finance expenditures, instead of just increasing taxes.

“Increasing state budget revenues without removing ineffective management is only worsening management of public finaces,” he told The Slovak Spectator.

One of the most heavily discussed issues in the media were the recommendations of the OECD for the tax system. The organisation advised Slovakia to introduce spending ceilings, and strengthen the monitoring and evaluation of spending programmes for which the recently established Fiscal Responsibility Board can play a useful role, the report reads.

The organisation also commented on the Slovak tax structure. It said that the state should have made it “less harmful to growth, notably by raising property and environmental taxes and lowering taxes on low wages”.

“The efficiency of the tax system should be improved by combating tax evasion and unifying tax collection, as planned,” the report reads.

Kažimír said that Slovakia had already passed some measures pertaining to VAT that “should prevent tax evasion and misuse of the tax system”, according to the Finance Ministry press release.

When it comes to raising taxes, Fico said during the presentation of the survey that they had only two possibilities: either to raise VAT, or to impose higher taxes on people who can afford it.

“It is the sovereign [decision] of every country which path it will choose,” said Fico, as quoted by the SITA newswire, adding that the measures will affect only people with higher salaries.

Dinga commented that the OECD report focuses on the changes to the tax structure, which is based on the fact that consumption and property should be taxed more than labour. Yet, he stressed, “every tax claimed by the state represents an involuntary transfer that serves to redistribute values in society”.

“Therefore we consider the total rate of payroll and tax burden more important than the structure of the tax system,” Dinga told The Slovak Spectator.

OECD claimed in its report that at 13.7 percent, Slovakia’s unemployment rate is the fifth highest in the group. The big problem remains joblessness among people who are out of work for more than one year.

“To combat this, effective labour market policies are needed, notably by increasing the efficiency and scale of the public employment service and investing in people’s skills,” reads the press release of the OECD.

Dinga of INESS says that such studies are relatively open to interpretation “since they contain many recommendations in several areas”. Nevertheless, he stressed that the amendment to the Slovak Labour Code passed in the end of October makes the labour market less flexible.

“The repeated implementation of entitlement for a layoff notice period as well as severance pay is making layoffs more expensive, [and] some companies have already started to dismiss people this year in order to save money,” he added.

Dinga assumes that one of the biggest problems in this area remains the increase in payroll taxes and corporate income tax, since higher taxes only “restrict the competitiveness of companies and reduce their sources for development and creation of new jobs”.

“This might contribute to a higher jobless rate and a more difficult situation for job seekers,” Dinga concluded.

Another area where Slovakia could make some changes is the education system. One of the proposals was to use already available school evaluations to raise the quality of teaching through identifying dysfunctional schools as well as the best teaching practices. Moreover, the OECD report advised the country to increase education funding and raise teachers’ salaries.

Slovakia is among the OECD countries that spend the least on education per student. Education only accounts for 4 percent of GDP, one third less than the OECD average, the report reads. Also the teachers in Slovakia are among the worst paid in the OECD.

“On average, a teacher earns less than half the average wage of a tertiary graduate, compared to between 77 and 89 percent in the average OECD country,” according to the report.

If Slovakia wanted to raise the salaries of teachers to 75 percent of the average wage of tertiary graduates, it would require a pay rise of around 50 percent, costing about 0.5 percent of GDP, OECD wrote in the survey.

In addition to this, the OECD recommended that Slovakia supports the education of disadvantaged pupils, in particular the development of pre-school education for Roma children, and to improve the transition from school to work through the acquisition of professional experience during studies by developing work-based vocational training, according to the report.

Fico responded that Slovakia has been dealing with the quality of the education system for about 20 years. He stressed that “the government will not avoid these challenges, but face them directly”, SITA wrote.

Meanwhile, the Education Ministry has established a new Council for Systematic Changes to Education, based on the recommendations of the OECD report. The council should respond to the proposals to improve the current situation in the education sector.

“This council will come up with many suggestions and will comment on the changes which our education sector inevitably needs,” said Education Minister Dušan Čaplovič, as quoted by SITA, adding that it will not deal with only regional or university education, but the system as a whole.

The minister also stressed that the council will be composed of specific personalities, and not the representatives of organisations. With experts on the economy, entrepreneurship, finances and public administration, Čaplovič hopes that their attitudes will be representative and ambitious and that they will help shape the modern education system.