DESPITE taking the lion’s share of foreign direct investment (FDI) to date, the western part of the country is not Slovakia’s only investment destination. Several investors now see potential in the east of the country, as demonstrated by recent significant moves by some of them to establish production plants there. Conferences represent one way to learn more about the region. The latest of these was Košice – Prešov Invest 2012, the latest edition of an annual event organised by the American Chamber of Commerce in Slovakia (AmCham) under the auspices of Economy Minister Tomáš Malatinský, which this year took place on December 4. 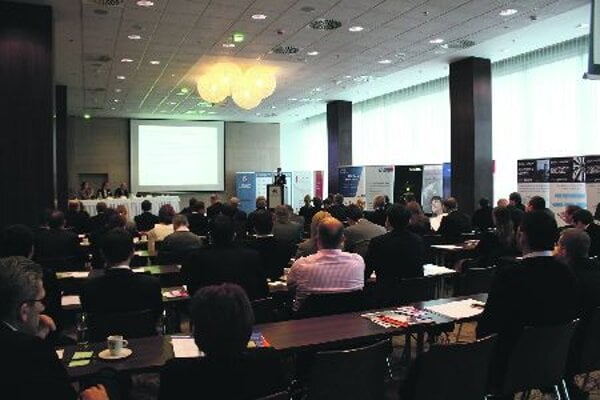 DESPITE taking the lion’s share of foreign direct investment (FDI) to date, the western part of the country is not Slovakia’s only investment destination. Several investors now see potential in the east of the country, as demonstrated by recent significant moves by some of them to establish production plants there. Conferences represent one way to learn more about the region. The latest of these was Košice – Prešov Invest 2012, the latest edition of an annual event organised by the American Chamber of Commerce in Slovakia (AmCham) under the auspices of Economy Minister Tomáš Malatinský, which this year took place on December 4.

“The aim of the conference is to point to the fact that Košice is here, and ready for investments,” said AmCham’s Košice director Rastislav Puchala, as quoted by the TASR newswire. “We want to present a portfolio that will be appealing to investors.”

The conference is usually attended not only by representatives from established investors, but also by representatives of firms which are just considering the possibility of coming to the region. At the event they get the chance to meet people from local municipalities as well as state-level representatives, and learn about opportunities to invest in the region – not to mention subsidies for which they can apply from either the state or from EU structural funds, Puchala told The Slovak Spectator.

“They [investors] evaluate positively the fact that they get a mosaic image of what they can use, what they can expect, for what they have to prepare and what might be interesting for them,” he added.

This year, the conference offered participants six blocks which covered a spectrum of themes, including strategies, new trends, innovations, investment risks, news from the regions and investments in infrastructure, Ľubomíra Gabrielová, spokesperson for the Slovak Investment and Trade Development Agency (SARIO), which co-organised the event, told The Slovak Spectator.

“The participants were able to learn about the proposed amendment to the law on investment stimuli, or get the latest information from the start-up community,” she said, adding that participants also discussed expansion opportunities – another way to attract new money to the region.

The conference was praised by Dany Rottiers, managing director of Eastern Investment Centers (EIC), a Belgian-Slovak business consultancy firm, who told The Slovak Spectator that a positive aspect of the event is that “the right people in Slovakia get in touch with the right investors or right FDI channels, and are updated on the latest FDI evolution”.

The first investment conference organised by AmCham in Košice took place in 2009, as one part of a marketing scheme by Košice that sought to find ways to attract foreign investors to the city, Puchala told The Slovak Spectator.

“We tried to put Košice on the investment map […] since other border areas represent strong competition for Košice Region,” he said, adding that they have since been trying to make the region more visible.

The growing investment potential of eastern Slovakia has been demonstrated by the fact that in 2010, for example, Košice Region received the third highest level of investment, and that in 2011 Prešov Region came second, Gabrielová said.

At the moment, Košice and its environs are becoming a base for IT companies such as IBM, Ness and T-Systems. Moreover, investors dealing with production of mechanical components, steel processing and steel construction are interested in investing in Slovakia’s eastern regions. The biggest sources of FDI are the USA, France, Germany and Belgium, Rottiers said.

However, many draft investment plans are currently suspended, mainly due to the current situation in the global economy.

Meanwhile, the conference organisers broadened the focus of this year’s event to cover other regions which have also struggled to compete as investment destinations with western Slovakia. Their aim was to present “investment-malnourished” regions of the country, Puchala stressed. This year, for example, the conference was attended by the mayor of Banská Bystrica, Peter Gogola.

Pros and cons of eastern Slovakia

Among the main advantages of eastern Slovakia are its available, low-cost labour force and its high-quality education and working habits, Puchala said.

“We benefit from the tradition of quality apprenticeship, which was here in the past but which is [gradually] crumbling away in front of our eyes,” he added.

Rottiers stressed that the main drivers for the future success of eastern Slovakia will be the D1 east-west highway and the R2, R3 and R4 dual carriageway roads, as well as the fact that the broad-gauge rail network spanning Russia and Ukraine and stretching as far as the Chinese border terminates in Košice, or that the region is close to several pan-European transport corridors – or so-called Helsinki corridors – which variously encompass road, rail and waterway routes.

However, the region’s uncompleted roads (the D1 highway is not expected to be completed before 2019 at the earliest) and missing infrastructure, including insufficient air links, might be considered weak points of eastern Slovakia, Puchala said.

“I have the feeling that the whole of eastern Slovakia has been at the periphery of all previous governments’ interest,” he commented.

If this part of the country wants to attract investors, it should persuade them “with the quality that these regions offer”, Puchala said, adding that there are people as well as municipalities “willing to do extra work for investors compared to regions which do not have to do this”.