Even though 2012 did not see industrial action by any professional group as dramatic as the protest by hospital doctors at the end of 2011, there were professions that made it clear they were no longer willing to keep quiet where their status and salaries are concerned – particularly nurses and teachers. 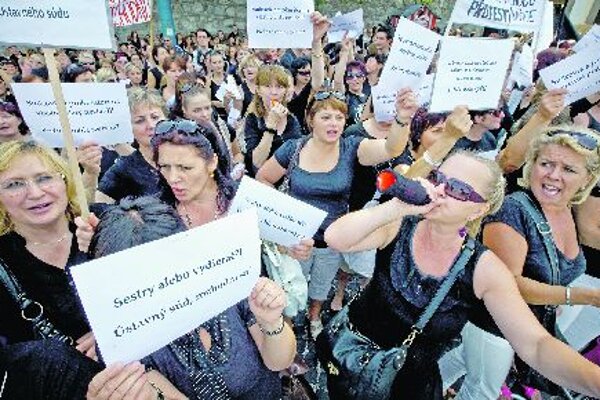 Even though 2012 did not see industrial action by any professional group as dramatic as the protest by hospital doctors at the end of 2011, there were professions that made it clear they were no longer willing to keep quiet where their status and salaries are concerned – particularly nurses and teachers.

The Slovak Chamber of Nurses and Midwives continued its campaign for higher salaries all through 2012, despite the fact that they had succeeded the previous year, under the Iveta Radičová-led government, in having their minimum salaries guaranteed by law, which parliament passed in February 2012.

The legislation mandates that the minimum starting salary for a nurse or midwife without practical experience should be at least €640 a month and then increase over the next three years to reach €666 per month. A nurse’s minimum salary is then supposed to increase every three months until it reaches €928 after 33 years of work experience.

The law ordered the payment of higher minimum salaries to nurses and midwives effective April 1, 2012, but some hospitals and private doctors avoided complying with the law by cutting the working hours of nurses or reclassifying them to lower-paid positions.

But at the beginning of March the then-president of the Slovak Medical Chamber, Milan Dragula, filed a complaint with the Office of the General Prosecutor in which he alleged the law was unconstitutional. The prosecutor later sent the complaint to the Constitutional Court, which subsequently passed a preliminary injunction suspending the law at a non-public session held on July 11.

The ruling provoked waves of discontent among nurses, who took to the streets in protest. In November, the Slovak Chamber of Nurses and Midwives, along with the Nurse and Midwife Labour Union, formulated eight demands and set up a deadline for each to be fulfilled. If these demands are not met, nurses may consider resigning en masse. Among their demands, nurses and other health-care personnel are seeking higher salaries and an end to social uncertainties like long hours and low pensions.

Teachers at Slovak schools also presented their demands, related to the financing of schools and the education sector in general, including a salary hike of 10 percent, which they had already presented to the Radičová government.

On September 13, when the cabinet of Robert Fico did not seem to be turning a sympathetic ear to their demands, teachers staged a day-long strike, but with little effect. In late November they thus entered what they called an unlimited strike, which was nonetheless suspended after three days to allow negotiations with the government, according to teachers’ union leader Pavel Ondek. As a result, on December 3, the government proposed a 5-percent wage hike plus tenure for teachers aged 55 and older, which the unions refused.

However, on December 6, Robert Fico announced that his government would increase the salaries of teachers and non-pedagogical employees in the education sector by 5 percent regardless of whether or not the unions agree to the deal. Several schools continued protesting by holding relay strikes.

Another top stories of 2012
Gorilla
Opposition
Mistrust in judiciary prevails
Troubled prosecution
2012: The year of Gorilla