One World, recorded on film

THE 13TH One World (Jeden svet) international documentary film festival took place on December 3-9. Organised by the civic association People in Peril (Človek v ohrození), it aims to bring to Slovakia documentaries confronting social, environmental and humanitarian issues. This year about 70 movies were presented in four venues in Bratislava; they will continue to be screened in 24 Slovak cities and towns as part of the One World in the Regions (Jeden svet v regiónoch) project. 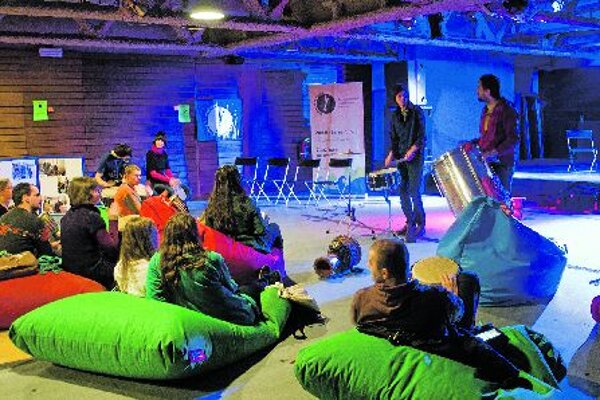 THE 13TH One World (Jeden svet) international documentary film festival took place on December 3-9. Organised by the civic association People in Peril (Človek v ohrození), it aims to bring to Slovakia documentaries confronting social, environmental and humanitarian issues. This year about 70 movies were presented in four venues in Bratislava; they will continue to be screened in 24 Slovak cities and towns as part of the One World in the Regions (Jeden svet v regiónoch) project.

The motto of this year’s festival was “World in Motion” (“Svet v pohybe”).

“In the Quran, even Satan has the right to speak,” opposition journalist Lilian Weslaty says in the movie Zero Silence, about the situation in Tunisia that launched the Arab revolutions. The world has been set in motion, the festival website states, adding that since the Arab revolutions, a wave of protests has also gripped Europe. If anyone thought that civic activism was on the verge of extinction, these events illustrate quite the opposite. The films show that even though the objectives and methods of protest in Egypt, Greece and the US differ, there is a connecting element in the strong will of young people who are demanding a change in the established order.

At the festival’s opening evening, hosted by writer Michal Hvorecký, the ninth Peril Award was bestowed on Ján Andris, a teacher from the Business Academy in Dolný Kubín, for teaching his students international solidarity, human rights, fair trade and other global issues and principles.
The competition for secondary-school students called Forgotten Stories (Zabudnuté príbehy) was also evaluated (which the non-profit association co-organised with the Nation’s Memory Institute (ÚPN));
it tasks the students with finding people who were subjected to state persecution during communism and to relay their stories in written or audiovisual form. The jury – Ondrej Krajňák of the ÚPN, historian Patrik Dubovský and journalist Eva Sládková – chose works by students from the Vavrinec Benedikt Nedožerský secondary grammar School in Prievidza as the winners.

Afterwards, the documentary Back to the Square (Späť na Tahrír) by Petr Lom was screened, showing the course of events in Egypt after Hosni Mubarak was toppled, illustrating how the roots of cronyism, military power and corruption run deep in Egypt and how the growing dissatisfaction with the changes – or lack thereof – has sent people back onto the streets to protest against the new regime.

“We try to adapt the concept of the festival to what is currently happening, and we try to reflect this not just in films and film sections, but also in the [post-screening] discussions,” said Nora Beňáková, programme director of the festival. A host of debates accompanied the film screenings, including some with Keith Jones, director of the movie Punk in Africa; Belarusian poet and activist Vital Ryžkou; Katarína Bajzíková from Partners for Democratic Change Slovakia; and with two women from Tunisia, journalist and human rights activist Hajer Mtiri and Nazha Ben Fredj from the Tunisian network for Transitional Justice. Mtiri and Ben Fredj discussed the reasons behind the nationwide revolution in Tunisia, and also mused on subsequent developments there. They pointed out similarities with the “Velvet Revolution” in Czechoslovakia 20 years ago and to the lessons that could be learned from the post-revolutionary process.

On Sunday afternoon, the Drumming Session with People in Peril (Bubnovačka s Človekom v ohrození) took place. It not only invited participants to “put their hands together” and take part in a drum session with musicians from Sounds Through Hands (Zvuky cez ruky), a civic association focused on informal education, but included brief presentations by Katarína Dubcová and Tomáš Bokor of People in Peril, which presented the association’s humanitarian, educational and development-aid activities. Founded in 1999, the non-profit civic association offers aid in various corners of the world plagued by natural disasters and armed conflicts, and in areas with socially handicapped groups.

Movies shown during the festival were divided into several sections according to social issues, e.g. pertaining to women, the environment, senior citizens and hidden civic problems in “traditional democracies”. The only competitive section was in the Slovak Documentary category, judged by an expert jury which chose Fragile Identity (Krehká Idenita) by Zuzana Piussi as the winner. The film ponders the “national identity” of contemporary Slovaks and how it can be easily misused by politicians.

One opposition blogger in Egypt says in Zero Silence that social media did not cause or bring about the revolution, but was undeniably the catalyst. And maybe a festival of “engaged films” that also comprises debates and workshops and gathers activists, volunteers and people who are anything but indifferent, can also become a catalyst for change.