Sons of Ivana Boórová back in Slovakia

THE RETURN of brothers Martin and Samuel Boór to Slovakia has concluded one phase of a case which has been widely covered by Slovak media over the past few months. The case has stirred not only the public but also politicians, who subsequently initiated changes in Slovak legislation relating to cross-country adoptions. 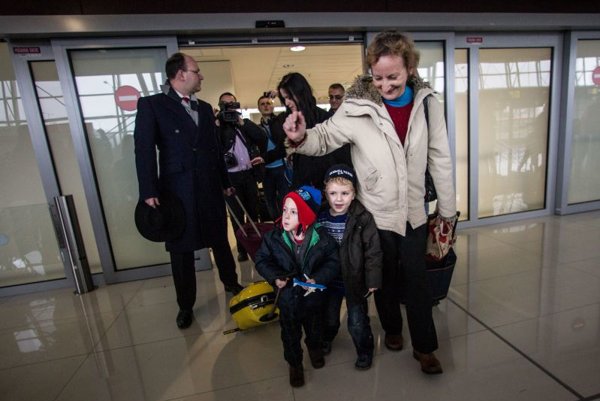 THE RETURN of brothers Martin and Samuel Boór to Slovakia has concluded one phase of a case which has been widely covered by Slovak media over the past few months. The case has stirred not only the public but also politicians, who subsequently initiated changes in Slovak legislation relating to cross-country adoptions.

The Boór brothers arrived at Bratislava Airport accompanied by their grandmother Eleonóra Študencová and Slovak Ambassador to Great Britain Martin Wlachovský on January 1. Their mother remains in Great Britain.

The boys were originally taken away from their parents, who currently live in Great Britain, by British social services, based on allegations that they had been mistreated. Yet, after several subsequent proceedings the appeals court allowed the boys to return to Slovakia to live with their grandmother via a ruling passed on November 16. Since nobody appealed the verdict, the court confirmed the ruling in mid December.

“We are finally home; I did not want to wait one more minute,” said Študencová, as quoted by the SITA newswire, adding that the boys were not traumatised by their departure from Great Britain.

With their return to Slovakia, the case for the Slovak Embassy to Great Britain is closed, said Wlachovský.

“We brought the children to Slovakia, they are away from British jurisdiction, now they are in Slovak jurisdiction,” Wlachovský announced, adding that he believes the state has fulfilled its task.

Andrea Císarová, head of Slovakia’s Centre for International Protection of Children and Youth (CIPC), who actively helped the Boór family with the case, said that it is a big precedent since “we saved not only these two Slovak children, but I believe also other [children]”. She also praised the support of Labour Minister Ján Richter and Foreign Affairs Minister Miroslav Lajčák.

Meanwhile, the Slovak courts have begun to deal with the case of the two boys. The district court in Dunajská Streda passed a ruling on January 3 which temporarily entrusted the brothers to the care of their grandmother. Yet, the court still has not decided over adopting the British ruling since nobody has officially asked the court to do so, spokesperson for the regional court in Trnava Martin Kulíšek told the TASR newswire.

Boórová’s children were seized by social workers on grounds of alleged mistreatment. Strict legal restrictions in the UK on the reporting of cases involving children mean that the exact nature of the allegations concerning the parents has not been revealed.

The boys were put into temporary foster care by a court ruling on July 19, 2010.

The children’s mother and grandmother then missed a May 2012 deadline for appealing a subsequent court ruling in which a judge refused to place the children into the care of their grandmother and thereby authorised their adoption, the Slovak Foreign Ministry explained in a statement which it published on September 18 in response to media attention to the case.

On September 6 Císarová of CIPC, who travelled to London after the cases were exposed by the media, appealed the ruling and requested that the court forgive the delay in appealing. She, as a representative of Slovakia, became involved in the case of Ivana Boórová’s children as a third party, interceding with the courts for both boys to return home while providing guarantees concerning their health care and provision of education.

On September 18, the court decided to grant the mother another chance to appeal against the previous ruling to allow her sons to be put up for adoption.

Rules for adoptions to change

The case and associated media coverage caused a wave of protests among Slovaks. Activists centred around a group created on Facebook to support the Boór family organised several demonstrations in front of the British Embassy in Bratislava, and engaged in other actions, such as sending mass e-mails in support of the Boórs to prominent members of British society, including the royal family, and to members of the Council of Europe.

Not only the public, but also politicians and several public servants responded to the case. In mid September the Labour Ministry launched an audit at CIPC, whose results showed that the centre did not violate the law when dealing with international adoptions. Yet the audit revealed several deficiencies in the current legislation as well as in the working procedures of the centre relating to the international adoptions of Slovak children, SITA reported on December 19.

The ministry responded to these findings with proposed changes to the adoption rules. One change prevents the head of the centre from deciding over adoptions on his or her own. Every case will be judged by a committee composed of the employees of the Labour Ministry, and experts such as paediatricians, psychologists and psychiatrists. It is also possible that one member of the parliamentary committee for human rights as well as representatives of NGOs will join the committee, SITA wrote.

Moreover, the ministry proposed to address all European Union member states with a request to sign an agreement over cross-border adoptions with Slovakia. Additionally, the British Education Ministry and Slovak Labour Ministry have signed a memorandum in which the Brits promised to report every new case of children being taken away from their Slovak parents to the CIPC, SITA reported.

Meanwhile, public defender of rights Jana Dubovcová published her own report in which she evaluated the procedures and steps taken by the Slovak authorities in cross-border adoptions. The report found that they do not protect the rights of children, but often violate them with “their unwillingness [to act] in the children’s interest, [and by] refusing to cooperate and a lack of interest in the child”, reads the press release published on November 28.

The report specified that the main problems were the inactivity and incorrect methods used by Slovak authorities, as well as the lack of communication between the Slovak and foreign authorities.

Dubovcová based her report on 95 files from the CICP which showed several deficiencies in the work of the centre, the Labour Ministry and party Foreign Affairs Ministry. She also proposed several recommendations that should prevent further violation of the rights of children, the report reads.

The change in the rules for adoptions was also discussed at the international level. The Standing Committee of the Parliamentary Assembly of the Council of Europe accepted a resolution expressing concern over how the family courts in countries in countries like the UK, Croatia, the Czech Republic, Portugal and Germany, which allow adoptions without the parents’ consent, handle children’s rights, the Sme daily wrote on December 4.

“Children should be separated from their parents only under exceptional circumstances,” reads the resolution that was supported by 22 of 25 representatives of the member states present, including Slovakia’s Smer MP Oľga Nachtmannová.

Slovakia’s representative at the European Court for Human Rights, Marica Pirošíková, said that this resolution provides crucial instructions for countries on how to proceed in such cases. After adopting the resolution, member states should adapt and harmonise their legislation and judicial practice, Sme wrote.