The future of online advertising?

IT IS not news that advertising revenues in print media continue to decline. Exact aggregate data for 2012 are not yet available, but so far the figures do not indicate any surprising reversals in this respect. The increasing number of tablets, smartphones and other online devices makes online advertising more appealing, while the economic crisis forcing companies to cut costs may actually help this area develop further. 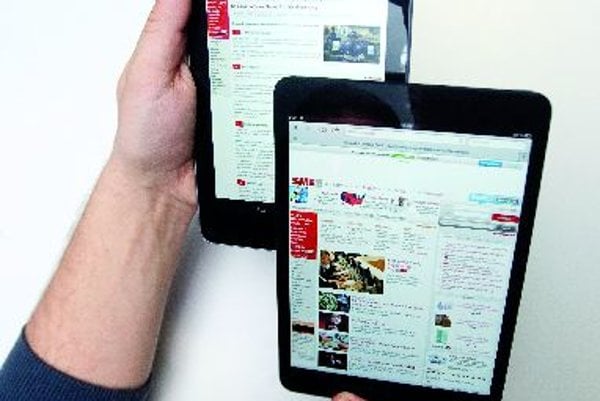 IT IS not news that advertising revenues in print media continue to decline. Exact aggregate data for 2012 are not yet available, but so far the figures do not indicate any surprising reversals in this respect. The increasing number of tablets, smartphones and other online devices makes online advertising more appealing, while the economic crisis forcing companies to cut costs may actually help this area develop further.

Milan Csaplár, the executive board chief of the Interactive Advertising Bureau Slovakia (IAB Slovakia), considers the online market to be promising.

“Many servers nowadays already offer their content in the form of websites and applications adapted for mobile devices and tablets,” Csaplár told The Slovak Spectator. “Even though mobile advertising currently creates only a small portion of the total revenue, it has potential for growth.

Advertisers are becoming increasingly aware of the usage of the internet via mobile devices.”
Social networks are also having an impact on the Slovak advertising market.

“Social networks are places with varied communities,” said Csaplár. “These are spaces through which you can build firmer relations with your users and where you can also find new ones.”
With regards to Facebook, Csaplár estimates that about two thirds of Slovaks with internet access have a Facebook account.

“On one hand this social network draws a portion of finances away from the Slovak advertising market, but on the other hand it can help to increase the rate of visits to Slovak servers and thus indirectly also increase revenues from advertising,” said Csaplár.

Csaplár sees a clear trend with the online advertising market in Slovakia: to gain a growing portion of the media market for the internet market. He believes that user behaviour, which has been changing over the long term, has been contributing to this.

“The internet has become a place where a significant portion of the population spends time while working as well as during free time,” said Csaplár. “Many people of a productive age do not follow what is happening through traditional media. Moreover, the internet remains the only media type offering the best targeted advertising aimed directly at the recipient with precise statistics about his or her behaviour. This is also why the outlook is very positive in terms of online advertising.”

Moreover, according to Csaplár, during this current time of cuts in companies’ costs, it offers the most effective solution. Thus, paradoxically, the economic crisis partly helps the internet.

There is also the assumption that the internet’s content will dovetail more closely with the needs of the user based on his or her behaviour.

“The internet will become more personal and we will be able to adapt it more to our individual needs,” said Csaplár.

IAB Slovakia, which monitors the revenues of member servers and estimates the revenues of non-member servers and foreign subjects operating on the Slovak market, does not have at its disposal aggregate results for 2012, so Csaplár could not go into detail about how Slovakia’s online market developed over the course of the year. Based on preliminary data for the first quarter of 2012, when revenues increased by as much as 25 percent compared with the same period in 2011, Csaplár estimates the annual growth to have been about 20 percent or more.

Banner advertising continues to dominate Slovak servers, according to Csaplár. It is closely followed by ‘search’ advertising due to the high influence of Google and etarget. Classifieds also make up a significant portion of revenue. According to Csaplár, a similar trend can also be found on other European markets. He also listed video and mobile as among the advertising formats that are seeing year-on-year increases.

According to Gemius Slovakia, the Slovak arm of the online research agency in Central and Eastern Europe (CEE), traditional advertising formats are used the most on the online display advertising market in CEE. On the monitored markets (except for Poland), their share reaches 90 percent or more, Vladimír Houba, country manager of Gemius Slovakia told The Slovak Spectator.

“In Slovakia, the share of these banners decreased by less than 6 percentage points during the first half of 2012 and is now at 90.6 percent,” said Houba. “On the other hand, the popularity of rich media formats increased when almost one fifth of advertising campaigns in Slovakia, or 19.4 percent, used them during the first half of 2012.”
Advertising banners which are a rich media format account for over 10 percent of all displayed banners, according to Houba. This is the third highest figure from all the countries included in the study. The highest number of displays of rich media formats in the CEE region was registered in Poland - more than one third, while in the Czech Republic and Hungary it was only 5 percent.

With regards to the effectiveness of online advertising, based on the Gemius AdMonitor report, which monitored more than 85 percent of media advertising campaigns ordered by media agencies on the Slovak market, Slovakia has the second highest (after Poland) click-through rate (CTR) in regards to display campaigns in these countries. CTR here is 0.56 percent, which is significantly more than in the Czech Republic, where it is 0.35 percent, or in Hungary with 0.27 percent, according to the Gemius AdMonitor.

Houba also pointed to a particularly interesting feature of the Slovak market: the banners of the telecom, finance, insurance and automotive sectors, which account for the biggest share of advertising campaigns on the market, are simultaneously those on which internet users click the most.

“Advertising campaigns of branches of telecom, finance and insurance lead most of the surveyed markets, but only in Slovakia do these banners also have the highest CTR,” said Houba.

TNS Slovakia, a company active in market research, global market information and business analysis, estimates that advertisers spent almost €639 million on advertising during the first nine months of 2012. Compared with the same period in 2011, this means an increase of over 10 percent. Spending on advertising on TV and in cinemas increased the most, up 17 percent and 13.7 percent, respectively.

Print media registered a drop: 0.3 percent for newspapers and 3.4 percent for magazines. The agency monitors and estimates spending on advertising by calculating the volume spent on advertising based on valid pricelists of individual media and barters; discounts or bonuses are not taken into consideration. Thus, real spending might be significantly lower.

When individual media types are taken into consideration, TV dominated with 63 percent, a 17-percent year-on-year increase, according to TNS Slovakia. Out of the others only magazines achieved a two-digit share, with 10.2 percent. However, compared with the previous year, this means a 3.4-percent decline. Radio media followed with 9 percent, which was actually up 5.9 percent. Outdoor advertising ended with a 1-percent increase, at 8.9 percent. Advertising spending in newspapers shrank by 0.3 percent to 8.7 percent. Cinemas close the chart with 0.4 percent, a 13.7-percent increase.