IDENTIFYING old postcards without a clear description can be quite difficult. This is the case for this postcard, which dates back to the turn of the 20th century. 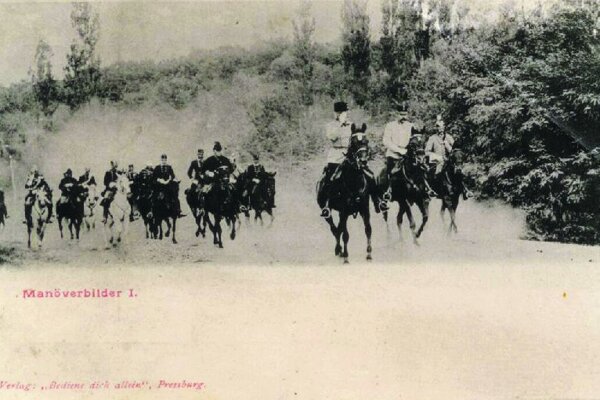 IDENTIFYING old postcards without a clear description can be quite difficult. This is the case for this postcard, which dates back to the turn of the 20th century.

The postcard lists the location of the scene, which helps to explain what is happening in the photograph. On the bottom, the name of Bratislava-based publishing house “Bediene sich allein” (Do It Yourself, or Serve Yourself) is printed, which indicates that the photo was taken either in the city itself or in its vicinity. The postcard’s second inscription, “Picture from manoeuvres”, provides further context.

The Austro-Hungarian imperial army began using the site of today’s Kuchajda Lake for military manoeuvres sometime in the first half of the 19th century. Thus, it is quite probable that the galloping cavalry were photographed at what was at that time a cow pasture, which is what the location’s name means in German (Kuh - cow, Heide - pasture).

In those times, the area was still pretty undeveloped, consisting mainly of meadows, gardens and farms but also of vast empty spaces. From a military perspective, it was an ideal place for a huge exercise ground where military tactics could be practised.

Not far from Trnavská cesta was a buglers’ wood, which was a grove where military buglers rehearsed marches and various alarm signals. The old military cemetery was also located in the vicinity.

Kuchajda was later used by soldiers of the first Czechoslovak Republic. Two interesting military regulations stem from this period: 1. Horses are to be yoked usually in the direction of the planned movement. 2. The A1 – 1 regulation: A commander is obliged to participate in the exercises at least once a week, and – if possible – in a sober state.