THE MASS pardon granted by President Ivan Gašparovič to several hundred convicts in early January did not, unlike its equivalent in the Czech Republic, provoke a strong public reaction. Gašparovič has nevertheless come in for stinging criticism this year, most of it following his announcement that he does not intend to appoint Jozef Čentéš, the candidate elected by parliament, to the vacant position of general prosecutor. 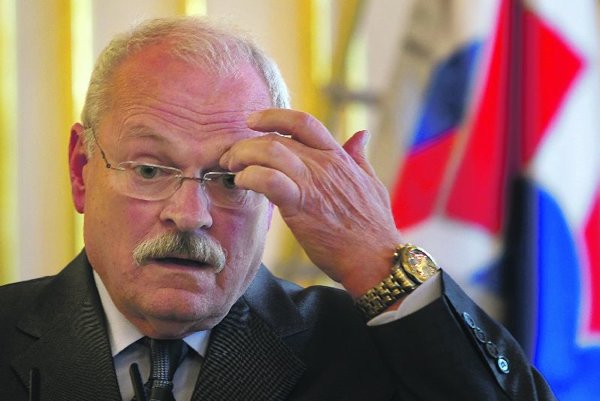 THE MASS pardon granted by President Ivan Gašparovič to several hundred convicts in early January did not, unlike its equivalent in the Czech Republic, provoke a strong public reaction. Gašparovič has nevertheless come in for stinging criticism this year, most of it following his announcement that he does not intend to appoint Jozef Čentéš, the candidate elected by parliament, to the vacant position of general prosecutor.

Such was the pressure on Gašparovič that on January 8 he went so far as to file a criminal complaint of libel against an unknown offender, a crime that under Slovak law can result in up to five years’ imprisonment. The president’s complaint was primarily a reaction to a blog entry published by Juraj Poláček on the website www.blogovisko.sk entitled ‘Murderers among us’.

In his article, Poláček referred to the fatal shooting of hunter Michal Bobák on August 2, 2009 in the Lešť military training area, which is also used as a hunting range. The investigation into his death concluded with Bobák’s best friend Štefan Drozd, who at the time was the general director of the military forestry company, admitting that he had accidentally fired the fatal shot. Drozd was given a suspended sentence of 18 months in prison. He was also banned from owning or handling firearms.

“Štefan Drozd has reason to be grateful to Gašparovič, who kept him in the post of director of Military Forests in the past,” Poláček wrote.

The Plus 7 Dní weekly wrote in 2009 that an unnamed high-ranking person was reported to be present in the Lešť military training area at the time the tragedy occurred.

Poláček, responding to news of the president’s criminal complaint, denied having called the president a murderer. He wrote on his blog that his article “is only a summary of all (now historical) facts and I never suggested any connection between Ivan Gašparovič and any tragic event in my text”.

No blogger has ever been taken to court in Slovakia for texts published on a blog. The law is unclear when it comes to blogging, as the rules applying to traditional media do not apply to so-called citizen journalism.

A confusion of alibis

While the criminal complaint prompted headlines, efforts by the President’s Office to scotch the story generated more questions than answers. In particular, the president’s staff failed to account for his whereabouts on August 2, 2009, instead offering a series of incorrect and subsequently amended versions of events.

Trubač admitted the mistake in a statement to the Pravda daily, saying that Gašparovič had in fact returned “on Friday [July 31] evening” to be able to see a football match in Bratislava on Saturday. However, there was no football match on that Saturday in Bratislava, Sme later wrote.

“I had the wrong information,” was Trubač’s subsequent response, as quoted by the Hospodárske Noviny daily. He then stated that Gašparovič had attended a football match on Sunday, August 2.

“We don’t need any alibi,” Trubač had earlier told Sme. “We are not dealing with [the issue] any more.” Trubač refused to communicate further with Sme after it published the July 30 letter.

On January 16, Sme reported that Trubač and the Interior Ministry had refused to release records maintained by the president’s security detail which would reveal his exact location on August 1 and 2, 2009, claiming that the data are classified.

Poláček opined that senior state officials, paid from the taxes of citizens, cannot just dismiss such issues as irrelevant.

“It would be more than appropriate if Ivan Gašparovič, through Marek Trubač, told the world how it really was with the presence of the head of state [on August 2],” Poláček wrote. He also accused Trubač of being a failure in his job.

Poláček has not been the only one criticising the president lately. At the beginning of the year Gašparovič became the butt of jokes circulating on social networks and the target of numerous critical articles published in the Slovak newspapers. The main source of ridicule was his decision not to appoint Čentéš, and the reasons he gave.

Political scientist Miroslav Kusý, a former rector of Comenius University in Bratislava, berated the president in an op-ed article published by Sme on January 3.

“I’m angry and upset about the latest shameful provocation by ‘my’ president,” Kusý wrote, referring to Gašparovič’s refusal to appoint Čentéš, adding that the president had put himself above everything in the state and “won’t be governed by the constitution, the Constitutional Court, the National Council [i.e. parliament], or the public – the street, in his words”.

Kusý called the Čentéš decision the final straw and called on Gašparovič to either appoint him as general prosecutor or resign immediately.

“Until you fulfil one of these conditions, I declare civil disobedience against you, and I will no longer regard you as my president,” Kusý wrote, addressing the president in an informal style, on first-name-terms. He pledged to wear a red ribbon as a symbol of his decision and called on people who agree with him to join his protest.

Gašparovič wrote a long reply, published on the official website of the President’s Office on January 7, saying that he had provided all his arguments for not appointing Čentéš in a nine-page letter sent to Speaker of Parliament Pavol Paška.

“I admit, I have not been indifferent to the ill-intentioned defamation of my person as a man and as a politician for years,” Gašparovič wrote. “I’m not flawless. I have never denied I’ve made mistakes in my life, but let the one who never made any throw the first stone!”

Gašparovič followed this up with another statement on January 9, addressing the citizens of Slovakia, in which he wrote that he was tired of being targeted constantly by “attacks” on himself and his office, and called on all citizens and politicians to cool their emotions, and to engage in calm, correct and decent communication. His appeal was “for the sake of the people in this state,”

Gašparovič wrote, adding “this is no longer about the person of the president, but about the state”.