EVEN though 2013 began almost three weeks ago, Košice held its main celebration during the weekend of January 19-20 to start off its year as the European Capital of Culture. The opening ceremony consisted of about 200 events featuring around 1,000 performers, with the ceremonial lightening of St Elizabeth’s Cathedral in Košice’s city centre as the climax of the Saturday programme and British band Jamiroquai as the main star of the two-day event. 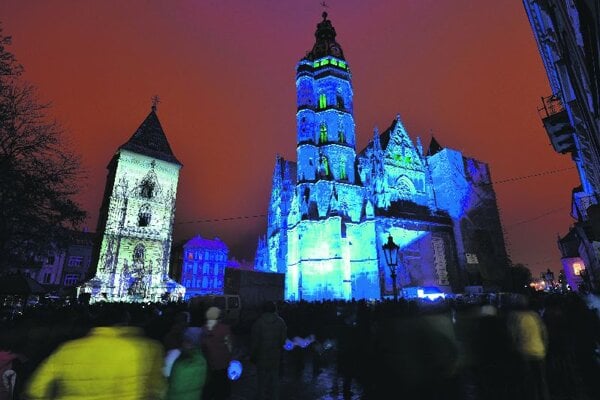 The spectacular illumination of the cathedral drew thousands into the city centre.“ (Source: TASR)
Font size:A-|A+

EVEN though 2013 began almost three weeks ago, Košice held its main celebration during the weekend of January 19-20 to start off its year as the European Capital of Culture. The opening ceremony consisted of about 200 events featuring around 1,000 performers, with the ceremonial lightening of St Elizabeth’s Cathedral in Košice’s city centre as the climax of the Saturday programme and British band Jamiroquai as the main star of the two-day event.

“Finally the heart of our city is also becoming the heart of the whole cultural Europe,” Košice Mayor Richard Raši said prior to presenting St Elisabeth’s in a completely different light on Saturday evening.

His words were followed by a light show projected onto the Urban Tower next to the cathedral, presenting the city as well as the region as Terra Incognita, i.e. unknown territory, and by the illumination of the cathedral. The spectrum of colours changed from light green to yellow, red to blue and pink to violet, lighting up the cathedral from the outside as well as from the windows. The show drew about 20,000 people into the city centre.

The opening of the European Capital of Culture (ECOC) programme actually began on Friday evening and was scheduled to last until Sunday night, after this issue of The Slovak Spectator went to print.
Vladimír Beskid, the artistic director of the Košice ECOC project explained that the opening ceremony was designed to be a gateway into the entire yearlong programme.

“It should be a tasting of the cultural events planned over the whole year,” Beskid said in an interview with the Košice daily Korzár.

“We made a number of sections: the strongest one is Music in the City, featuring almost 40 bands and singers, followed by Breakfast in the City, International Cultural Spots, Weekend of Design and Fashion, the Scene of Theatre and Dance, films, etc.”

According to Beskid, the intention was to set up the programme to make it interesting not only to locals, but also to visitors from other parts of Slovakia and abroad. The opening ceremony’s programme should serve as a jumping board and a vision for the future and this is why the organisers gave it the name “Welcome to the Planet of Košice”.

“This way we will dispatch Košice’s symbolic cultural space probe into the world,” said Beskid. “This is because we consider the project a turning point; something what will trigger a different view of the cultural policy in the city as well as in the whole region.”

The ceremonial opening weekend started on Friday with events like a disco on ice and a presentation of a monograph of architect Ľudovít Oelschläger, one of four major personalities of 20th century Košice culture. The ceremony continued Saturday morning with discussions with artists, the opening of exhibitions, a fashion show and indoor as well as outdoor concerts.

The official part of the programme was planned for Sunday. The historical building of the Košice State Theatre was to house a gala programme to be attended by Androulla Vassiliou, European Commissioner for Education, Culture, Multilingualism and Youth, Slovak President Ivan Gašparovič, Prime Minister Robert Fico, cabinet ministers, representatives of the city as well as other senior state officials.

The opening ceremony was expected to culminate in the open-air Grand Opening Show in the city centre, which organisers hoped would draw about 30,000 people. The list of performers featured Japanese drummer Ichitaro, French street artists, world masters in beatbox Under Kontrol from Marseilles, musicians from Košice and eastern Slovakia and others. It was to be completed by a pyrotechnic-music show, within which organisers promised the latest pyrotechnic effects, which were presented for the first time last year in Monaco.

The main star of the opening ceremony was British band Jamiroquai, whose concert was scheduled to be held in the Steel Arena on Sunday evening.