PEOPLE from both Slovakia and abroad are focusing on Košice as it hosts the European Capital of Culture in 2013, with high expectations over whether it will manage to fulfil its ambitious plans after years of preparation. It is already clear that not all of the planned renovations and restorations were complete by January 19 and 20, but organisers maintain that the title of the European Capital of Culture (ECOC) is not exclusively about programmes completed in 2013, but about long-term developments that the city initiates for its future beyond 2013. 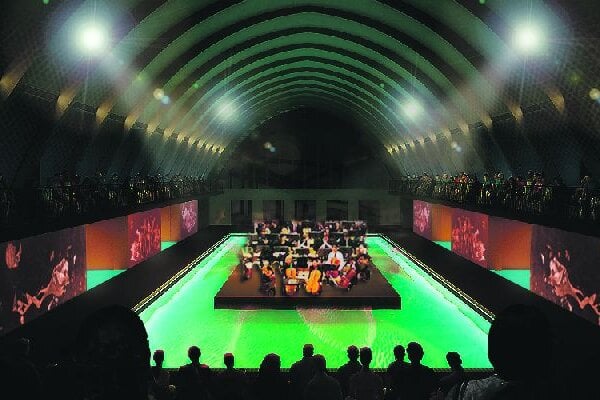 A former indoor swimming pool has been turned into the Kunsthalle. (Source: Courtesy of ECOC Košice 2013)
Font size:A-|A+0

PEOPLE from both Slovakia and abroad are focusing on Košice as it hosts the European Capital of Culture in 2013, with high expectations over whether it will manage to fulfil its ambitious plans after years of preparation. It is already clear that not all of the planned renovations and restorations were complete by January 19 and 20, but organisers maintain that the title of the European Capital of Culture (ECOC) is not exclusively about programmes completed in 2013, but about long-term developments that the city initiates for its future beyond 2013.

“Thanks to the ECOC project Košice has become the most dynamically developing city in Slovakia,” Richard Raši, the mayor of Košice, said in mid December as quoted by the SITA newswire. “We are building a modern European metropolis worth living, working and creating in, but which is also worth visiting.”

Vladimír Beskid, the artistic director of the ECOC project, stresses that the concept of the programme’s structure is not limited to one-off cultural events held over 2013, but that its main aim is to initiate a process of long-term development and to create optimal conditions for cultural operators throughout the whole region, as well as to support international partnerships and creative and prospective initiatives.

To meet these goals Košice has prepared investment projects co-financed by €60 million from EU funds. The money has been used for the restoration, renovation and extension of selected buildings and premises, which should continue to serve their new purposes for the next five years.

“Twenty investment projects will bring about positive changes in terms of possibilities for carrying out cultural events,” said Ján Sudzina, the director of Košice 2013, as cited by SITA.

Sudzina believes that the investments will help transform Košice from being perceived as a centre of heavy industry, into a centre of the creative industry.

“In Košice there are 5,000 people working in the IT sector,” said Sudzina, as quoted by the TASR newswire, adding that he hopes Košice will become a centre of support to the creative industry that is able to generate money.

Some of the investment projects include the reconstruction of eight buildings owned by the city of Košice, seven owned by the Košice Self-Governing Region (VÚC Košice) and three held by the Ministry of Culture.

Out of these, the project to refurbish Kasárne/Kultur-park, costing about €25 million, is of primary importance as in the future it will serve as a place for the creative industry and new trends in the arts. The former military barracks, dating back to the end of the 18th century, are located close to the city centre and their renovation significantly extends the centre of Košice and brings into it a new modern landmark.

Kasárne/Kulturpark is another investment project whose completion was postponed, until spring 2013.
The city of Košice attributes the delay to the discovery of unused ammunition from WWII, among others reasons.

Another significant project is the Kunsthalle, with costs projected at about €7.5 million. It involves the rebuilding of a former indoor pool, which was built in the late 1950s and early 1960s and is considered one of the most valuable buildings in Košice in terms of architecture. The pool, designed by architect Ladislav Greč, was closed down in the 1980s after a drop in ground water levels caused defects in the structure. The rebuilding will repurpose it into a modern multi-use centre for art and culture, while the pool will be preserved for aesthetic reasons by being refilled. Its completion was also delayed until spring 2013.

This postponement delayed the completion of the reconstruction of Mestský Park (City Park), from the end of December until April, as the plumbing and electricity lines are interconnected. City Park, a transitional space between the city centre and the railway and bus station, is the largest park in Košice, and the city hopes that after its reconstruction the city will have a new functional space for outdoor activities.

Along with City Park, three other parks in Košice have been revitalised to change their functional use into outdoor galleries and provide new space for displaying art. In total, €10 million was allocated for revitalising the city’s parks.

Another investment project, important especially in terms of pursuing ECOC goals after 2013, are SPOTs, or former heat exchange stations. These were built in the suburbs of the city in the 1960s and 1970s. However, subsequent technological developments caused many of them to close. Their rebuilding has provided the suburbs, which have suffered from a lack of cultural infrastructure, with new spaces for community development and culture at the local level.

Ulička Remesiel, or Crafts Lane, is another city investment project. The city hopes that revitalising this artistic quarter will help create a compact space to present history, culture and art with connections to the Kunsthalle, City Park and the city centre.

Other reconstruction and restoration projects include the St Elizabeth’s Cathedral, the easternmost Gothic cathedral in Europe; the ruins of Košice Castle, which date back to the late Bronze Age; the amphitheatre as well as the State, Puppet and Thália theatres; the State Science Library; the Slovak Technical Museum; the East-Slovak Museum; the East-Slovak Gallery and the manor house in Krásna.