ECOC to boost tourism in Košice

THE PRESTIGIOUS title of European Capital of Culture (ECOC) brings to those who hold it new opportunities and development possibilities as well as an influx of visitors. Slovak tourism experts hope that this will be the case for Košice, which was selected to hold the title in 2013 along with Marseilles, France. While Košice has prepared a project that will see the city metamorphose from an industrial city into a city of creativity and culture, with a range of events to be held over 2013, the city itself can also boast a rich history, numerous architectural gems and a variety of museums and galleries. 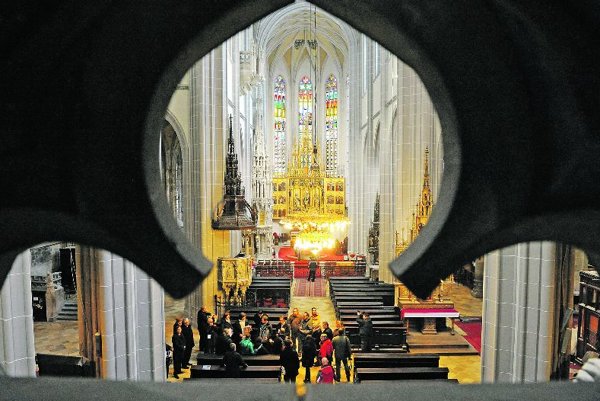 St Elizabeth's Cathedral is one of the major sights in Košice. (Source: TASR)
Font size:A-|A+0

THE PRESTIGIOUS title of European Capital of Culture (ECOC) brings to those who hold it new opportunities and development possibilities as well as an influx of visitors. Slovak tourism experts hope that this will be the case for Košice, which was selected to hold the title in 2013 along with Marseilles, France. While Košice has prepared a project that will see the city metamorphose from an industrial city into a city of creativity and culture, with a range of events to be held over 2013, the city itself can also boast a rich history, numerous architectural gems and a variety of museums and galleries.

“The ECOC title is very well known and prestigious, especially in Europe,” Zuzana Nemcová, spokesperson of the Slovak Tourist Board (SACR), told The Slovak Spectator. “Each city that earns the title becomes a subject of interest to [tourism] experts, the general public and the media.

Košice is no exception. The world-known publishing house Lonely Planet, US CNN and the British Guardian are luring visitors to Košice.”

Marek Harbuľák, president of the Slovak Tourism Association (ZCR SR), agrees, saying that this is a big opportunity, not only for Košice but for all of eastern Slovakia, to attract a large number of visitors.

“Organisers, but also businesspeople active in tourism, have realised from the very beginning the potential this event has for the development of tourism,” Harbuľák told The Slovak Spectator, adding that this was one of the reasons behind the launch of the first city destination management organisation.

Harbuľák and Nemcová believe that events organised during 2013, as well as those held before then, have made Košice an interesting enough destination for both Slovak and foreign visitors.

Activities are spread across the whole year, which fosters an environment that encourages visits to the city throughout the year, said Harbuľák. “Behind some activities are several previous editions, thus they have already had the chance to gain fans.”

Of the planned events, Nemcová pointed to White Night/Nuit Blanche, the USE THE C!TY festival, the gourmet Gurmán Fest and the Summer in the Park festival.

SACR has been actively promoting the ECOC project in Košice, both on its website and via its marketing activities abroad, for example at tourism fairs and the 2012 Olympic Games in London.

“Currently, Košice representatives have a very attractive space for presentations at the CMT fair in Stuttgart,” said Nemcová, adding that since Slovakia is a partner country of the fair this year, this raises interest among journalists and the fair’s visitors. “On the German market the European Capital of Culture is very popular. Visitors are interested in the city of Košice and the planned events.”

Studies confirm that the title brings new visitors to cities that host the ECOC. A study cited by the European Commission has shown that the number of tourists visiting such cities for at least one night increased by 12 percent on average compared with the year before the city held the title. This figure was as high as 25 percent for Liverpool in 2008 and Sibiu (Romania) in 2007.

Košice and Marseilles are taking their titles from Maribor, Slovenia and Guimaraes, Portugal.

Maribor and Košice share some features: they are both the second biggest cities in their countries and both have a rich industrial past.

The experience in Maribor confirms that the title attracts new visitors. In just the first half of 2012 the city registered an 82-percent increase in the number of tourists compared with the previous year. Over the first nine months there was as much as 62-percent growth. Austrians were the most numerous foreign visitors to Maribor, the TASR newswire wrote, citing data provided by the city of Maribor.

In terms of visitors who spent the night, Maribor reported an increase of about 15 percent over the first half of 2012, while foreign visitors outnumbered locals 4:1. In 2011 and 2012 many world renowned tourist guides, like Lonely Planet, AOL Travel and TripAdvisor, listed the area of Maribor-Pohorje among their Top 10 destinations.

The city of Košice

Košice, with its population of approximately 250,000, is the second biggest city in Slovakia. It is located 400-450 km away from the 450,000-strong capital, Bratislava, depending on the route chosen.

The two cities are not connected by multi-lane highway yet, though completion of such a link has been high on the agenda of every recent government. The current government of Robert Fico estimates the completion of a highway in 2018. Experts often list incomplete road infrastructure in eastern Slovakia as one of the reasons behind the lower number of investments in the area compared to the western part of the country.

The capital of eastern Slovakia, as Košice is dubbed, owes its industrial reputation in particular to U.S. Steel Košice, a large steel mill originally built during the communist regime and currently employing over 11,000 people. But over the last few years a significant IT community has emerged, with the number of employed IT experts estimated at 5,000, for example at T-Systems Slovakia and NESS KDC.

The history of Košice as a city dates back to the 13th century as it is thought to have acquired town privileges in 1290. As a city, Košice is unique in that it was the first city in Europe to gain a royal warrant for a coat of arms in 1369, the city writes on its website.

During the city’s history, periods of prosperity were followed by years of turmoil caused by the threat of Ottoman invasion, the religious conflicts of the Reformation and Counter-Reformation and later by a series of aristocratic rebellions against the Habsburgs. Each of these historical periods left its mark on Košice, which has retained its compact historical centre, now a designated historical preserve. Its focal point is Hlavná, a long, narrow lenticular square. A major renovation in the 1990s brought back its former grandeur and historical appearance, even as the city was plunged into debt as a result. St Elizabeth’s Cathedral, the easternmost Gothic cathedral in Europe, dominates the square and is reason alone to visit Košice.

Next to the cathedral is the 14th-century Gothic St Michael’s Chapel and the 15th-century St Urban Tower. Other sacral buildings include the Premonstratensian church, which is the most valuable Baroque structure in Košice, as well as a couple of synagogues, as Košice used to be home to an extensive Jewish community – one on Zvonárska Street and a second on Puškinova Street.

The ECOC investment projects have also brought attention to the ruins of Košice Castle, which have remained a site of archaeological research. Revitalisation of the site was one of the major investments of the ECOC project.

Košice is home to several museums and galleries, including the Slovak Technical Museum (with the biggest avionic exhibition in Slovakia), the East Slovak Museum and the East Slovak Gallery. The city also houses a famous collection of coins known as the Košice Golden Treasure, found in 1935 during the reconstruction of a building in the city centre. The collection – one of the largest of such finds anywhere in the world – consists of 2,920 golden coins, three medals and a Renaissance chain more than two metres long dating back to between the 15th and 17th century.