In Saint Emeram’s Cathedral in Nitra, a medieval fresco was found that is unique to Central and Eastern Europe. Discovered under an important early Baroque altar, a debate over what to do with the fresco quickly ensued. 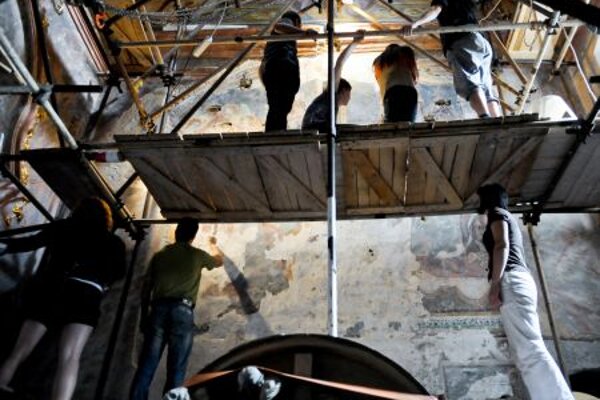 In Saint Emeram’s Cathedral in Nitra, a medieval fresco was found that is unique to Central and Eastern Europe. Discovered under an important early Baroque altar, a debate over what to do with the fresco quickly ensued.

An international committee then decided to leave the 14th century fresco in its place and to relocate the altar to the opposite side of the lower nave of the church.

“Both these important monuments will thus be presented to the public,” Niotra diocese Archbishop Viliam Judák said. “The fresco will be lit and accompanied by explanatory text, so that visitors can understand the core of the findings,” he added.

The marble altar from 1662, called the Altar of the Deposition from the Cross, is currently lying dismantled on the floor in the lower nave. It will probably be moved to the opposite side where the Altar of St John of Nepomuck is situated. Spokesman of the Nitra Archdiocese Miroslav Lyko told TASR that the recommendations of the committee should also be accepted by the Nitra Conservation Office, but that they are still awaiting the official stance.

Restorers found the unique fresco in the first half of 2012, hidden under the altar in the Nitra Castle cathedral. Dating back to the 14th century, it depicts the cycle of the Virgin Mary. Lyko said that it was probably the only fresco of its kind in Central Europe; similar frescoes can be seen mostly in central Italy. Next to the altar, there are more paintings which are even older, but these will not be uncovered. All works are slated to be finished and the fresco unveiled by July 5, the date of 1200th anniversary of Ss Cyril and Methodius coming to the territory of current Slovakia.