DOCUMENTARY maker Zuzana Piussi and journalist Zuzana Petková, who had both been threatened with criminal prosecution in association with their work, found out in mid January that their cases will not be going to court. The developments provoked a sigh of relief not just from Piussi and Petková but from political ethics and journalism watchdogs who regarded the prosecutions as threats to freedom of expression in Slovakia. 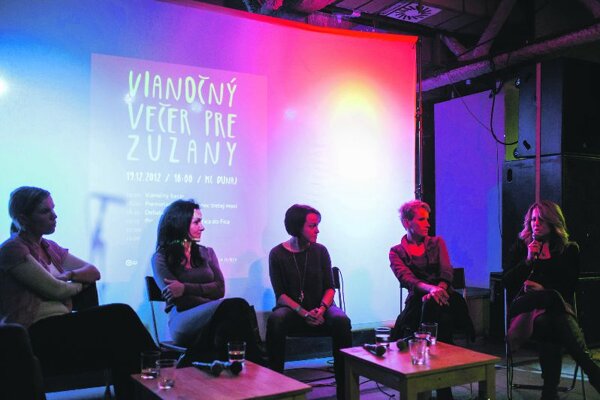 DOCUMENTARY maker Zuzana Piussi and journalist Zuzana Petková, who had both been threatened with criminal prosecution in association with their work, found out in mid January that their cases will not be going to court. The developments provoked a sigh of relief not just from Piussi and Petková but from political ethics and journalism watchdogs who regarded the prosecutions as threats to freedom of expression in Slovakia.

The police on January 18 halted the criminal prosecution of Piussi, the director of ‘The Disease of the Third Power’, a critical documentary about what its creators call the “black holes” in Slovakia’s judiciary, over an alleged violation of confidentiality of verbal expression in a private conversation, a criminal offence which could have resulted in a two-year prison sentence.

At around the same time, a prosecutor halted the prosecution of Petková for what the authorities called the unauthorised use of personal data when writing a newspaper story that included information about the salary paid by the Justice Ministry to the wife of Supreme Court President Štefan Harabin when she was employed at the ministry, the Sme daily reported on January 18.

“Undoubtedly, the crime was not committed by the accused [Petková],” a spokesperson for the Bratislava prosecutor told Sme.

The closely-watched case concerning Piussi arose after a judge featured in her documentary alleged that the confidentiality of a conversation in which she was involved had been violated by its inclusion in the film. The documentary featured Judge Helena Kožíková, a former head of the Bratislava I District Court, in conversation with the daughter of the late Marta Lauková, another judge. The daughter is seen trying to confront Kožíková about statements she had earlier made to her mother. Kožíková, a former member of the Judicial Council, Slovakia’s top judicial body, alleged that the interview was recorded and broadcast without her consent. Part of Kožíková’s face is obscured in the film but she claimed that she was still identifiable.

“Because this act is not a crime there is no reason to advance the case,” Trenčín Police spokeswoman Elena Antalová told the SITA newswire on January 18, adding that the decision would have to be confirmed by the prosecutor. The regional prosecutor’s office was reported to have received the police’s decision on January 21.

Piussi received the backing of a wide range of non-governmental organisations at the time the prosecution was launched. Legal watchdog Via Iuris claimed at the time that it was unjustified, suggesting that the events took such a turn partly thanks to the media coverage.

In comments to Sme, Piussi said that while she was relieved at the outcome, she believed the decision had been prompted by media pressure and not, as it should have been, by principles of justice.

Via Iuris claimed last October that several of Kožíková’s claims were unjustified, arguing that Piussi did not need her consent to produce or use the recording of the conversation.

“According to the Civil Code, visual and audio recordings can be produced or used without the consent of individual entities for artistic purposes and for press, movie, radio and television news reporting,” Via Iuris said in a press release, adding that the documentary can be regarded unambiguously as an artistic document which at the same time was prepared for the purposes of news reporting.

The Civil Code also stipulates that the use of audio and video recordings for artistic or news reporting purposes cannot be at odds with the justified interests of a private individual, Via Iuris noted, while adding that the documentary pertained to a widely publicised case which was a matter of public interest, and addressed the situation in the judiciary, which has a significant impact on society. Kožíková was a member of the top judicial body, the Judicial Council, and the conversation pertained to her activities and statements while performing her job as chairwoman of the Bratislava I District Court, Via Iuris argued.

About 70 prominent Czechs artists, including former dissidents and political prisoners, signed a petition in support of Piussi and against the lawsuit and sent it to Prime Minister Robert Fico, according to Sme. The Slovak branch of the international writers’ association PEN and the Association of Independent Producers also supported Piussi. An internet portal for activists, Changenet.sk, published a statement with more than 2,900 signatories backing Piussi’s actions, SITA reported.

“After a year and a half of meaningless prosecution; seven visits to the police and hours of questioning, it is good news,” Petková, who currently works for the Hospodárske Noviny daily, told Sme in response to the decision.

The prosecutor said that it was obvious that the defendant had not committed the alleged crime, Sme reported on Friday, January 18. Harabin commented that the prosecution service could now find the true perpetrator, who he alleged was “probably some political nominee of [former justice minister] Lucia Žitňanská”, instead of “persecuting an innocent journalist”, according to Sme.

A statement released in August 2011 by IPI Slovensko, the local branch of the International Press Institute, a journalism watchdog, warned that bringing criminal charges against Petková was “unacceptable in a democratic state”. The IPI wrote that rulings of the European Court of Human Rights had clearly specified that if journalists are acting in the public interest they are entitled to use personal information about the people they are reporting on.