THE JOBLESS rate in Slovakia continues to rise, hitting a nine-year record at the end of 2012. In December almost 400,000 people were jobless, pushing the unemployment rate up by half a percentage point to 14.4 percent. The last time Slovakia’s unemployment rate reached this level was nine years ago. The high jobless rate is of no surprise to Prime Minister Robert Fico, who ascribed it to the bad situation in the whole eurozone, while the opposition and employers attribute its rise to the Fico government’s consolidation measures. 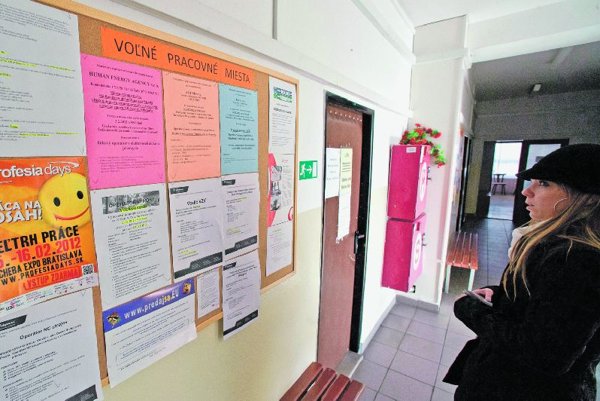 Joblessness has increased in all regions of Slovakia (Source: TASR)
Font size:A-|A+0

THE JOBLESS rate in Slovakia continues to rise, hitting a nine-year record at the end of 2012. In December almost 400,000 people were jobless, pushing the unemployment rate up by half a percentage point to 14.4 percent. The last time Slovakia’s unemployment rate reached this level was nine years ago. The high jobless rate is of no surprise to Prime Minister Robert Fico, who ascribed it to the bad situation in the whole eurozone, while the opposition and employers attribute its rise to the Fico government’s consolidation measures.

“I would like to ask everybody not to be surprised by the growing unemployment in Slovakia because it is growing across the whole eurozone,” Fico said in response to the rise in the unemployment rate. “It is not possible to remove Slovakia from the context of the eurozone, because we are such an open economy that actually 85 percent of our production ends up in eurozone countries.”

The opposition Slovak Democratic and Christian Union (SDKÚ) described the rising unemployment as the first symptom of Fico’s consolidation measures, including the hike in taxes and payroll taxes and changes to the Labour Code.

“What has been happening is what we have called the assassination of Slovakia’s economy,” SDKÚ leader Pavol Frešo said in response to the figure, as quoted by the TASR newswire.

Another opposition party, the Christian Democratic Movement (KDH), saw similar reasons behind the rising unemployment. Miloš Moravčík, the KDH vice-chairman for public finances, recalled that as early as July 2012 the KDH had warned the Fico government that its significant increases in taxes and payroll taxes would cause an increase in unemployment.

“Alas, already thousands of Slovaks are paying for the arrogance and ignorance of Smer,” said Moravčík as cited by TASR.

During December, based on statistics from the Central Office of Labour, Social Affairs and Family (ÚPSVaR), the unemployment rate increased by 0.5 percentage points to 14.44 percent, which means Slovakia registered its highest unemployment rate since May, 2004, when it reached 14.47 percent. The number of jobseekers who are ready to work immediately increased by 13,473 people to 390,111.
The steep increase in unemployment surprised analysts.

“We expected an unemployment rate above 14 percent, but the growth by as much as 0.5 percentage points surprised us, alas, negatively,” Eva Sadovská, an analyst with Poštová Banka, told The Slovak Spectator.

The number of unemployed people increased in all regions of Slovakia. Banská Bystrica Region reported the highest jobless rate, at 20.81 percent, and thus overtook Prešov Region, with its rate of 20.66 percent. Košice Region came close to the 20-percent level with a 19.58-percent unemployment rate.

“We view as negative a situation where one fifth of economically active citizens are jobless in as many as three regions,” said Sadovská, adding that while Bratislava Region has the lowest unemployment rate, it still exceeds the 6-percent level.

Sadovská pointed out that the number of long-term unemployed and unemployed young people remains high.

“These are groups of citizens which have been searching for jobs with even greater difficulty,” Sadovská said, citing data from ÚPSVaR according to which over 295,000 jobseekers are classified as disadvantaged and that this share makes up more than two thirds of the number of jobseekers registered at job offices.

Sadovská does not expect any dramatic change in the development of the labour market in 2013.
“Unemployment will remain high,” said Sadovská, estimating its average level at 14.15 percent over this year.

The National Union of Employers (RÚZ) sees the rising unemployment as a fulfilment of its forecast, recalling that its representatives warned several times that the revised Labour Code, which went into effect at the beginning of 2013, along with other previously adopted measures, would harm the business environment and fundamentally affect the situation on the labour market. RÚZ estimated that these changes would result in about 50,000 people becoming jobless.

“I admit only unwillingly, because it is bad news, but unfortunately our forecasts have been gradually fulfilled,” Martin Hošták, RÚZ secretary, told The Slovak Spectator.

According to Hošták, ÚPSVaR registered 356,423 unemployed in August, when negotiations over the draft revision to the Labour Code were almost complete, but in December the number was 390,111, which is an increase of over 30,000 over four months. In this respect Hošták warned that the revision is valid only as of January 1, 2013, which means that the negative impacts of the measures already started to become visible before they actually went into effect, because companies laid off employees preventively to avoid related costs that were to increase after January 1, 2013.

“This is a very bad prerequisite for the next development on the labour market this year,” said Hošták.

The increase in unemployment in Slovakia began following the financial and economic crisis that hit the country back in 2008. At that time many companies responded to a drop in orders with mass layoffs and by optimising their operations. Based on ÚPSVaR statistics, in 2008 mass layoffs, i.e. reductions in labour force in sizes that require companies to report them to local job offices, numbered 17,526 people. In the following year this number soared to 26,080, but decreased to 10,293 in 2010. The decrease continued in the following years to 5,900 people in 2011 and 3,261 in 2012, the Sme daily wrote.

PM Fico claims that combating unemployment is the biggest challenge of the current government.

“We will fight for the salvation of each working place,” said Fico as cited by the SITA newswire.

The government wants to solve the high unemployment by granting stimuli to large companies already present in Slovakia, as well as with investments that will bring new jobs, especially into less developed regions of Slovakia. The former might mean incentives for steel maker U.S. Steel in Kosice and aluminium smelter Slovalco, while Economy Minister Tomáš Malatinský promises investments that will create thousands of new jobs.

“Within two weeks these projects will be sent to the Finance Ministry and the Labour Ministry for assessment,” Malatinský said as cited by the SITA newswire, adding that after their response the Economy Ministry will be ready to submit these projects to the Slovak government.