BRATISLAVA ZOO has announced the birth of two young caracal males, Asaf and Amis. They were born on November 15, 2012. 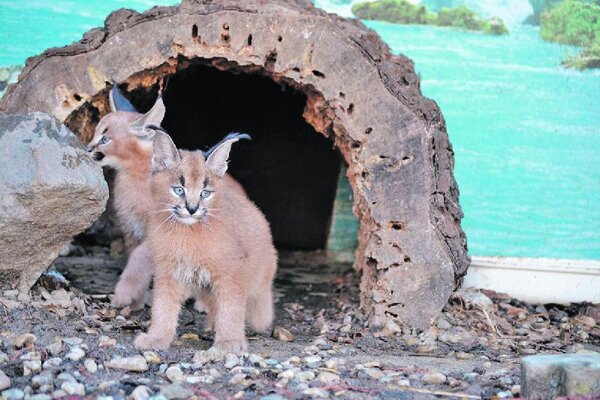 BRATISLAVA ZOO has announced the birth of two young caracal males, Asaf and Amis. They were born on November 15, 2012.

Zoo director Miloslava Šavelová informed the SITA newswire that the zoo waited to announce the birth until the newborns were able to go outside and run on their own.

Both Asaf and Amis, as well as their mother, Abira, are safe and healthy according to the first veterinary examination.

Abira comes from South Africa, while the father, Mazuri, is from Berlin Zoo. In October 2011, Mazuri was brought in for mating. While the their match-making lasted two weeks, it was not until September 2012 that the mating which produced the kittens actually occurred.

A caracal pregnancy typically lasts 69 to 78 days, and the female gives birth to two to six cubs. Šavelová informed that Abira had no complications during her pregnancy.

Eighteen days after their birth, the youths weighed 950 and 1,000 grams. When they were weighed again on January 4, their weight was found to have doubled.

“The behaviour and health of the animals is optimal and without complications,” Šavelová said.

“Asaf and Amis get the same food as their mother: i.e. beef, horse and chicken meat, cut into tiny pieces.” The young caracals develop their hunting instincts with dead mice.

In the wild, caracals (also known as desert lynx) live in the semi-deserts and savannas of northern Africa and central and south-western Asia. They lead nocturnal and solitary lives and are known to be shy.