“I PROMISE that as a president elected through the direct vote of the citizens I will try to be the president of all [Czech] people,” said Miloš Zeman, who won the first direct presidential election in the Czech Republic with 54.8 percent of vote, the TASR newswire reported. 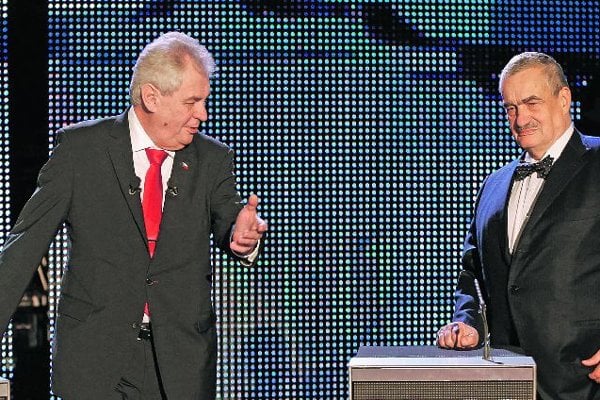 “I PROMISE that as a president elected through the direct vote of the citizens I will try to be the president of all [Czech] people,” said Miloš Zeman, who won the first direct presidential election in the Czech Republic with 54.8 percent of vote, the TASR newswire reported.

The former chair of the Czech Social-Democratic Party (ČSSD) defeated his opponent, current Czech Foreign Affairs Minister Karel Schwarzenberg, who received 45.19 percent of the vote in the run-off held on January 25 and 26. Zeman will replace current President Václav Klaus on March 8.

The future president has already announced that his first official foreign visit will be to Slovakia.

“I have received this question 862 times, and for 863rd time I answer that my first foreign journey will lead to Slovakia,” Zeman said, as quoted by the SITA newswire.

Tomáš Strážay of the Research Center of the Slovak Foreign Policy Association, a think tank, said that by choosing Slovakia for his first foreign visit, Zeman is following tradition.

“The Czech Republic and Slovakia have very similar positions, which stems from their common history. They also share the same attitude toward most European policies, so I suppose the choice was obvious,” Strážay told The Slovak Spectator.

He also pointed to the healthy relations between the two countries, which improved after both countries joined the European Union in 2004. Since there are several factors aside from the president that influence the mutual relations between the two countries, and since “Karel Schwarzenberg, as well as Miloš Zeman, are set on positively developing relations with Slovakia”, it is not very likely that the situation will change in the future, Strážay added.

After the election results were revealed, the new Czech president was congratulated by Slovakia’s two highest senior officials: Prime Minister Robert Fico, whom he often refers to as a friend, and President Ivan Gašparovič.

“Regardless of the result, it was clear even before the run-off that the next Czech president would be an outstanding figure,” said Fico, as quoted by TASR, adding that he respects “the will of the Czech people”.

In a letter sent by Gašparovič, the Slovak president stated that the highest public office in the Czech Republic has gone to an outstanding figure who appreciates the naturally close and friendly relations between his fellow Czechs and Slovaks.

“I am convinced that the shared history of Slovaks and Czechs, along with the inheritance of mutual respect, trust and natural friendship between our countries and their people, represent a solid basis for further strengthening the remarkable Slovak-Czech cooperation,” Gašparovič wrote. He also invited Zeman and his wife to an official visit to Slovakia.

Though the chairs of the right-wing political parties supported Schwarzenberg, they also congratulated the new president on his victory. The opposition leaders said that they respect the will of the people and expressed hope that the new president will continue to foster good relations with Slovakia.

Former chair of the Slovak Democratic and Christian Union (SDKÚ) party Mikuláš Dzurinda said that the Czechs had two good options to choose from. He added that Miloš Zeman will be a representative head of the republic.

“He will contribute to European policy as well as strengthen Slovak-Czech solidarity,” Dzurinda told SITA.

Dzurinda and Zeman served as prime ministers in 1998-2002, during which they cooperated to deal with delicate issues that were left unresolved after the separation of Czech and Slovak Republics.
They agreed on how to divide common federal property, as well as on exchanging shares in big banks and returning Slovak gold that had been deposited in Czech financial institutions, the Sme daily wrote.

Some issues caught the attention of Slovaks

Throughout the presidential campaign, both candidates made several statements that caught the attention of the Slovak public.

Zeman, for example, said in an interview with the Czech news internet portal iDnes.cz that encouraging the immigration of young Slovaks could solve the problem of the country’s declining birth rate, adding that this would be advantageous due to the lack of a language barrier, SITA wrote on January 22.

Although Slovaks may not have been pleased with this statement, numerous Slovak students have, in fact, already been migrating to the Czech Republic to study and later work, Strážay stressed, adding that, “Slovaks are already helping to fill the ‘demographic holes’ these days”. The analyst said he does not believe that the new president will actually attempt to lure masses of Slovaks to the Czech Republic, but rather that such claims were merely part of the election campaign rhetoric.

Zeman also made headlines when he cancelled several interviews arranged with the Slovak media. The reason was due to critical commentary published by Sme in which the author described Zeman “as the worst candidate among all [other runner-ups]” and pointed to the “very extensive base of weird to fearsome links leading to former communist partisans and ‘tunnelers’ to Moscow”.

Strážay said he does not assume that Zeman will have problems cooperating with the Slovak media after his appointment to the post. He described the move as counterproductive since the new president will need to present himself and his activities to the foreign media. Yet he added that his relations with Sme might be “more complicated”.

Schwarzenberg also caught Slovakia’s attention during the presidential campaign when, as foreign affairs minister, he said in a debate held on January 17 that in his opinion the Beneš Decrees lost their effectiveness long ago, and that “former politicians or generals [would] face the International Criminal Court these days” for implementing laws similar to those created by Beneš, TASR reported.

Fico criticised the statement, saying that the Beneš Decrees are part of Slovak as well as Czech legislation, and that they are unchangeable and irreversible. Any attempts to abolish or amend them might cast serious doubts over the results of the Second World War, the Slovak prime minister added.

“Therefore we have been surprised by the statements of the foreign affairs minister of the Czech Republic,” Fico said, as quoted by TASR, adding that Slovakia considers the claims to be “a destabilising element”.

Strážay said that attitudes in support of the Beneš Decrees are obvious in both the Czech Republic and Slovakia and that they are not very likely to change. He added that such statements might simply have been part of Schwarzenberg’s election campaign rhetoric.

“The process of dealing with the past and reconciliation has, in my opinion, advanced a lot in the Czech Republic in the past few years and there is no interest in disrupting or changing it,” Strážay stressed. “Of course, the Czech Republic counts on the support of Slovakia over such fundamental questions.”