SLOVAKIA and Poland are likely to launch a joint project to host the 2022 Winter Olympics in Krakow and Poprad-Tatry. If successful, it would be the first time that a single Olympics has been hosted by more than one country. The government’s decision to support the project has provoked mixed reactions among Slovaks. 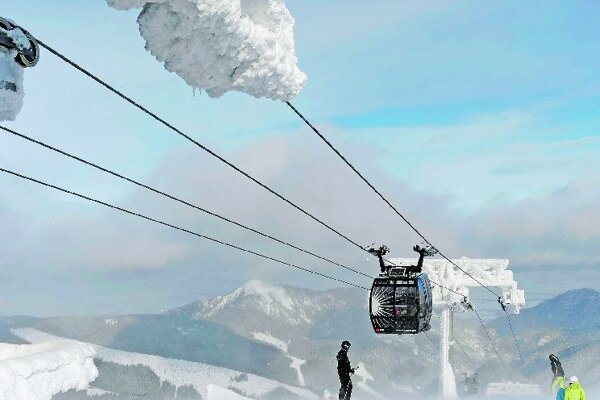 SLOVAKIA and Poland are likely to launch a joint project to host the 2022 Winter Olympics in Krakow and Poprad-Tatry. If successful, it would be the first time that a single Olympics has been hosted by more than one country. The government’s decision to support the project has provoked mixed reactions among Slovaks.

“We will go into that,” was how Prime Minister Robert Fico announced his government’s intention to endorse the joint Polish-Slovak candidacy project to organise the 2022 Winter Olympics, at a press conference on January 24 in Poprad. Fico said he would certainly tell Polish Prime Minister Donald Tusk at their next meeting that the Slovak government officially supports the candidacy.

The announcement came after more cautious earlier comments from Fico, when he said that having the Olympics in Slovakia would be a success and a great opportunity, but that “we mustn’t have big eyes”.

However, after his January 24 meeting with representatives of the regional and local governments in Poprad, representatives of the Slovak Olympic Committee (SOV) and several other sporting organisations, Fico resolved to support the project and was quick to assign the government’s plenipotentiary for youth and sports, Dušan Galis, and Education Minister Dušan Čaplovič to prepare material that will include the basics of the project, including its economic implications and requirements for infrastructure. The material should be submitted to the cabinet as early as February.

Both national Olympic committees would then have to approve and submit the candidacy in October 2013; the deadline for candidacies is set for November 2013. The International Olympic Committee (IOC) will hold a final vote to choose the winning candidate on July 31, 2015 at its 127th session in Kuala Lumpur.

The SOV made it very clear that the initiative came from Poland.

“That’s the main difference in comparison with previous candidacies of Poprad-Tatry to organise the winter Olympics in 2002 and in 2006,” the SOV’s media communications manager, Ľubomír Souček, told The Slovak Spectator, adding that the SOV had refrained from proactive moves before central, regional, and local government representatives had agreed at their joint meeting on January 24 to give the project the green light.

Poprad-Tatry has already bid to host the winter Olympics twice, but without success. In 1995 it failed to make much of an impression in a competition among nine candidates bidding for the 2002 winter Olympics; they eventually went to Salt Lake City, USA. Another attempt followed straight afterwards, in 1999, but despite that bid being more elaborate and professional, according to the SOV, the IOC selected the Italian city of Turin.

After both Poprad-Tatry and the town of Zakopane, just across the border in Poland, failed in their separate bids to host the 2006 Winter Olympics, members of the IOC evaluation committee recommended to both candidates that they consider a joint project in the future, Peter Chudý, director of the High Tatras Tourism Association (ZCR VT) and a former member of the preparation committee for both previous bids by Poprad-Tatry (in the latter as general-secretary of the committee), told The Slovak Spectator. Following that, the local councils of Poprad, Zakopane and Vysoké Tatry signed a memorandum on cooperation on a future joint candidacy.

This time around, the joint Polish-Slovak project will also face some strong competitors, for instance the Norwegian town of Stavanger, as well as Davos and St Moritz, both in Switzerland.

“It’s clear that our chances of succeeding in cooperation with Poland, a country [that is] incomparably bigger, more populous, and [is a] stronger economy and lobbyist than Slovakia, is objectively much more realistic than in the case of a solely Slovak offer,” Souček said.

The government has so far talked mainly about the potential for the skiing and ice hockey competitions to be held in Slovakia.

The Polish side offered to let Slovakia organise the alpine and freestyle skiing competitions in Slovakia, reportedly using the slopes in Jasná, in the Low Tatras.

“Almost everything is ready now in Jasná,” said Janka Gantnerová, head of Slovakia’s skiing federation, as reported by the Sme daily, adding that Jasná is currently preparing to host the junior world cup in skiing in 2014.

The Slovak side, however, made it clear from the beginning of the talks with Poland that their participation would to a large extent depend on locating part of the ice hockey tournament on the Slovak side of the border too. Ice hockey is extremely popular here, and is considered by many to be Slovakia’s national sport.

“We care very much about organising the hockey tournament,” Fico said, as quoted by Sme.

“It is now up to the Polish side as the initiator of the joint candidacy to say whether they will accept Slovakia’s interest [in the ice hockey tournament],” Souček told The Slovak Spectator.

Less than two years ago (in spring 2011) Slovakia organised the Ice Hockey World Championships in Bratislava and Košice. For the Olympics, new stadiums would need to be built in Poprad and Liptovský Mikuláš.

The Olympics is also perceived as a development project with a huge potential impact on employment, the tourism industry, and general economic development in the regions where the games would take place, Souček said in an interview with The Slovak Spectator.

The SOV currently has only rough estimates of the costs of organising the games. These could reach between USD1.5 billion and USD2 billion, with Slovakia covering 20 or 30 percent of them, depending on whether Poprad-Tatry would host just skiing competitions or ice hockey games too.

The costs of construction and modernisation of infrastructure, mainly roads, railways and airports, is not included in the SOV figures and would require a special budget, Souček noted.

Chudý noted that such investments would not be just single-purpose investments for the Olympics, but could foster development of the whole region in the future: he listed in particular the modernisation of Poprad-Tatry Airport, the construction of two modern multi-functional winter-sports stadiums in Poprad and Liptovský Mikuláš for the ice hockey tournament, and the construction of an Olympic village.

“A successful candidacy and the following organisation of the games would be a gain for the whole region,” Chudý told The Slovak Spectator.

However, the Finance Ministry sounded a note of caution, saying that Slovakia cannot afford to launch any “megalomaniac” projects, given the country’s current financial and economic situation.

“The focus should be on building infrastructure that would need to be built regardless of the Olympics, and that would serve not only athletes during Olympics but also Slovakia’s inhabitants after [the Olympics are over],” the ministry’s press department said in a statement for The Slovak Spectator.

The participation of the private sector in the organisation of the games would also be necessary, the ministry noted.

Financial concerns, along with environmental worries, have been cited among the main problems that might face the potential candidacy project, with critics saying that Slovakia stands no chance and that the money spent bidding would be wasted.

Fair-Play Alliance, a non-governmental political ethics watchdog, criticised the government for announcing big decisions without substantial background preparation for such a decision. The intention to participate in the organisation of the games was announced with no preceding analyses or impact studies that would “at least give a framework of what such a step would mean for Slovakia”, the alliance’s Peter Kunder told The Slovak Spectator.

“We don’t know whether and how much it would cost taxpayers, what concrete gains the government expects, and what risks it perceives,” Kunder explained. “The public doesn’t even know whether such an analysis even exists.”