THE CURRENT exhibition at the Slovak National Gallery is focused neither on one artist nor on a specific period or artistic movement: rather, it comprises the artistic perception of the phenomenon of blood, from medieval saints and martyrs to more modern concepts, including a recruitment poster seeking blood donors. 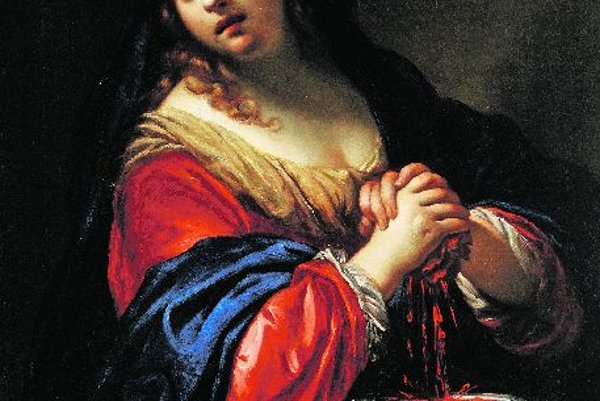 THE CURRENT exhibition at the Slovak National Gallery is focused neither on one artist nor on a specific period or artistic movement: rather, it comprises the artistic perception of the phenomenon of blood, from medieval saints and martyrs to more modern concepts, including a recruitment poster seeking blood donors.

On the first and second floors of the SNG’s Esterházy Palace in Bratislava, a selection of almost 200 works spanning eight centuries from various artists, both Slovak and foreign, including some unknown, will be on display until March 31. Entitled Blood, it offers a colourful view of this important, symbolic and corporeal liquid.

“It is a less traditional exhibition genre, a combination of works of old and new art, divided into eight sections,” the exhibition’s curator Dušan Buran told a press conference. “Two of these sections form the focus of the exhibition: medieval art and 20th century art,” he said. Buran added that this unique, trans-historical curatorial project is centred on the phenomenon of blood in various categories relating to the human body, and thus also to life, or death, and also as the subject of various literary, religious and social relations. Visual culture reacted to these aspects, the curator commented, as quoted by the TASR newswire, adding that sometimes the culture even created and actively formed the relations as well as the many taboos connected with blood.

The medieval period is mostly represented by crucifixes, paintings and artefacts related to blood.

Exhibits like the document Decretum Gratianicum Glossa Ordinaria from the end of the 12th century,
and a manuscript by Johannes Utin Weltchronik (The Chronicle of the World) from 1458-1462, form the first section of the exhibition. The painting by Simone Pignoni (1650–1700) entitled St Praxedis depicts the saint (also known as St Praxedes or St Praxed), who is said to have buried early persecuted Christians, collecting the blood of martyrs. In a lecture accompanying the exhibition, art historian Vladislav Malast said that many years later, the medieval painting was repainted, probably because it was considered too graphic for the tastes of the period, but thanks to restoration work and an X-ray scan, the original image was uncovered.

The modern works are diverse, ranging from a photo-document of the installation by Jiří David called Srdce nad hradem (The Heart above the Castle), through posters and newspaper clippings dating back to the Velvet Revolution (which ended communism in Czechoslovakia). The artist known as Monogramist TD approaches the theme of blood more graphically, and has several works shown within this exhibition. The youngest generation of artists is represented by Marek Kvetan, Lucia Dovičáková, and Dorota Sadovská, among several others. The mediums are varied: video-installations are frequent as well as installations, glass objects and conceptual works.

The exhibition, thanks to its theme, is accompanied by a host of events, for example screenings of movies focused on blood, on Tuesdays at the Lumiére cinema at Špitálska 4, and a lecture about the exhibition in English on March 21 at 17:30, called, simply, Blood. More information can be found (also in English) at www.sng.sk.