The young and the challenges they face 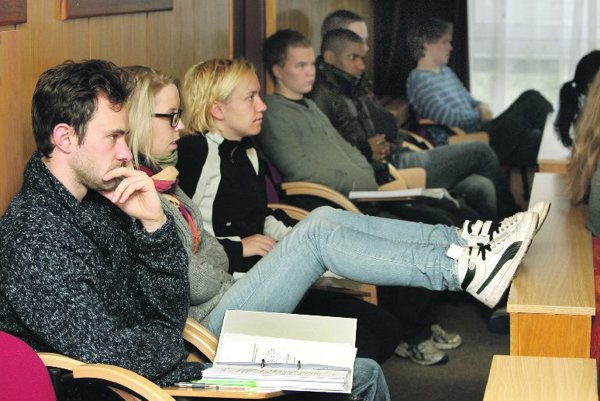 STATE housing policies and a lack of jobs may be among the reasons behind the tendency of many young Slovaks to live in the same household as their parents, according to sociologists. Recently the German magazine Der Spiegel, based on data of the EU statistics authority Eurostat, reported that 56.4 percent of young adults aged between 25 and 34 lived in their parents’ house in 2011, which is the highest percentage in the entire EU.

Nevertheless, Zuzana Kusá, a sociologist with the Slovak Academy of Sciences explained for The Slovak Spectator that the Eurostat data might be misleading, since there are a considerable number of young people who live in rented flats or abroad but are officially still registered as living at the home of their parents. That said, Kusá acknowledges that the lack of affordable housing and the impacts of the government’s housing policies are delaying the decision of young people to move out of their parents’ house.

According to Kusá, young people also faced similar challenges in terms of their economic situation and housing 30 years ago. However, gaining independence from their parents was “definitely simpler” back in the 1970s and 80s if the children followed the ‘standard model of life’, which involved getting a job, getting married and raising children. Kusá also pointed out that in the past, people established a significant number of households in rural areas with the help of their families. Nevertheless, Kusá adds that leaving the parental house was not easy even back then, and low wages as well a lack of available housing were among the challenges they had to tackle, just as they do today.

Observers agree that the main challenges that make independence rather difficult for young people to achieve include limited access to affordable housing, be it rented or purchased, and the threat of poverty.

“The current situation in Slovakia is a combination of an extremely limited supply of available housing and a gap between the average income of a young person and the average price of an apartment,” Silvia Porubänová, a sociologist with the Institute for Labour and Family Research told the Sme daily.

The limited availability of rental housing also plays a role in youths’ reluctance to move out of their parents’ house. As chief economist with UniCredit Bank Ľubomír Koršňák explains, the share of rental flats on the housing market stands at 3 percent in Slovakia, while in Europe the average is around 50 percent, Sme reported. Koršňák adds that moving into a rented house does not require the significant initial capital that purchasing a house does.

Kusá attributes a great share of responsibility for the current situation to the abandonment of conceptual housing policies in the early 90s, while yielding to what she calls naive clichés, such as “the market will solve everything”. She also cites shifting the responsibility for housing policies from the government to the municipalities without sufficient rules, as well as financial stimuli, which in effect placed the burden of finding housing entirely on the shoulders of the individual citizen. According to Kusá, housing policies have yet to become a public issue.

Yet Slovaks are also hesitant to buy their own homes due to the high unemployment rate and the threat of poverty, Porubänová told Sme. Slovakia has the fifth highest unemployment rate of people aged under 25 among the EU states, according to Eurostat. The data from November 2012 suggest that every third young Slovak does not have a job, the TASR newswire reported on January 18.

Eva Sadovská, analyst with Poštová Banka, attributes this development partly to the economic crisis, suggesting that back in 2007 every fifth young person was without a job, TASR reported.

According to Sadovská, the education system does not respond sufficiently to the needs of the labour market, which is reflected in the high number of unemployed graduates without sufficient practical experience and work habits, among other things. The inability to speak a foreign language, as well as unrealistic job demands, also join the list, according to the analyst.

However, the economic situation is not necessarily the main reason behind the current housing trends among Slovak youth.

Slovaks have never really possessed a considerable drive to take on mortgages, and prefer living in multi-generational homes over owning their own homes, Sadovská said, as quoted by Sme, adding that the mortgage market in Slovakia is relatively young compared to western countries.
Only one in 12 Slovaks lived on his or her own with a mortgage or another loan in 2011, Sadovská said.

Dávid Bosý, a sociologist and lecturer at the University of Prešov, suggested, however, that there is a larger trend in the Euro-Atlantic sphere of young people delaying their adulthood by graduating from school later and remaining economically dependent on their parents for a longer period of time.

To become independent and leave the parents’ house was a challenge even in the 1980s, Kusá said. People had to deal with the lack of available housing despite the government handing out 30,000 to 40,000 flats per year, while nowadays it is just one third of this number, according to her. What is challenging today, as it was 30 years ago, is to maintain a balance between work and home life. In Kusá’s opinion, however, today this balance is perhaps given more priority by males, while back then it was mostly a ‘female issue’.

“Even though there were enough jobs, the starting salaries were low and young families were needy even then: during the parental leave, when the family lived on one income only, young families with loans were left without the help of their older parents, almost at the edge of poverty,” Kusá said.

Twenty-five years ago perhaps trying to obtain different things for the household consumed more time for the young, since these items were not widely available in shops, Kusá said, adding that the predictability of life has sometimes become a psychological burden for the young. Yet, the unpredictability of jobs and income can become a psychological burden in the same way, she said.

SPECIFYING the differences between how young people spent their free time back in the 1980s versus today is rather difficult due to the wide range of interests related to life circumstances then and now, Zuzana Kusá, a sociologist with the Slovak Academy of Sciences, said.

“Today one is tempted to say that the way young people spend their time is influenced more by global media, but it in fact would be a response without content since even there [among media] there is a lot of diversity,” Kusá told The Slovak Spectator. “But as a matter of fact, over the past years a decline in the participation in different free time activities at the local level in smaller municipalities can be noticed, which might be a consequence of young people departing from rural locations to seek jobs.”

Kusá added that unlike in the past in Slovakia, there are many districts where every fourth citizen is without a job.

The departure of young, mobile people who would otherwise be able to inspire various grassroots activities at the local level, negatively affects the possibilities for spending leisure time, even for those who stay in villages, Kusá said.

On the question of how new technologies have affected relations and communication between young people and their maturity, Kusá responds that “if we disregard the risk of continuous narcissism, which is encouraged by the easy path to publicity”, then the impact is positive.