Valuch, held by Iran, is back home

MATEJ Valuch, a 26-year-old Slovak national who was detained in Iran over what Iranian officials allege is a case of espionage, is back in Slovakia, and on February 8 he appeared unexpectedly at a press conference accompanied by Slovak Minister of Foreign Affairs Miroslav Lajčák, the SITA newswire reported. 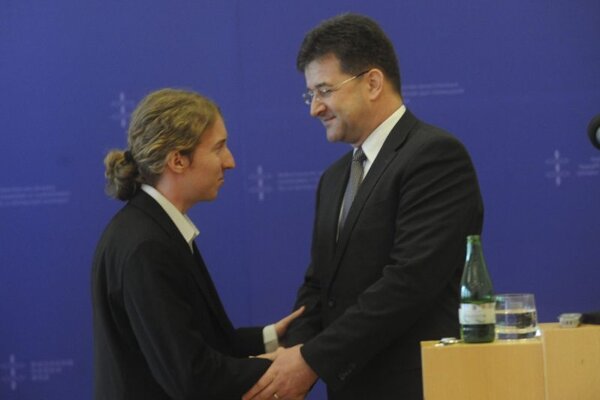 MATEJ Valuch, a 26-year-old Slovak national who was detained in Iran over what Iranian officials allege is a case of espionage, is back in Slovakia, and on February 8 he appeared unexpectedly at a press conference accompanied by Slovak Minister of Foreign Affairs Miroslav Lajčák, the SITA newswire reported.

“I want to say that I am no spy,” said Valuch, who earlier this year appeared in a video called ‘Hunter in Trap [sic]’, shot by the Iranian Ministry of Intelligence and posted on YouTube in which he speaks in English, dubbed into Persian, and appears to confess to working clandestinely for the United States’ Central Intelligence Agency (CIA).

Slovak diplomats managed to negotiate with the Iranian party the release of its Slovak citizen, Valuch, who arrived in Slovakia on February 7.

“Our negotiations with the Iranian party, which had been taking place since January 15 on a daily basis, and which were very complicated and demanding … were [finally] successful,” Lajčák said as quoted by SITA.

Valuch was released from the Iranian prison on February 6 in the late evening hours and accompanied by the Slovak consul as he was taken to Slovakia’s representation in Teheran.
Getting Valuch back to Slovakia did not cost the country a single euro, Lajčák said, while thanking his colleagues for what he described as an excellent job working on the case.

Valuch told journalists that he is unable to explain why he was accused of being a spy.

“Perhaps they themselves know best,” he said as quoted by Sme daily. “I operated in Iran as a headhunter and I worked on similar projects, for example, in Slovakia and Budapest.”

Yet neither Valuch nor Lajčák wanted to discuss the circumstances under which the video was shot, with Lajčák suggesting that “we should not go into these details” and that he does not want to complicate Valuch’s life, SITA reported.

Doubts about the spy story

Since the video emerged, people close to Valuch in Slovakia, including his family and his former university, have expressed doubts about him being involved in espionage.

International relations expert Jaroslav Bureš in January suggested that Valuch might have become caught up in Iranian propaganda ahead of the country’s presidential elections, scheduled for later this year.

“The case of Valuch fits into the pre-election scenario,” said Bureš, a Middle East expert and research associate with the Institute for International Relations in Prague, in an interview with Sme. “The regime fears that a revolutionary wave [like that seen after the manipulation of the results of the last Iranian presidential election, in 2009] might be repeated. It needs to prove that the nation is under threat, that foreign spy services are operating there, and that they want to repeat the unrest.”

Before being arrested in Iran, Matej Valuch had last visited his home in Dubnica nad Váhom, Trenčín Region, in August last year, after which he left without saying where he was going.

Valuch’s alma mater, Matej Bel University in Banská Bystrica, where he earned a bachelor’s degree in business, described him as an ambitious student who had once interrupted his studies to take a trip to Iran, acoording to Sme.

Valuch specialised in banking, financing and investment, according to Sme.