THE CENTRE-RIGHT opposition parties have been searching for ways to win back the hearts of voters who deserted them after the collapse of Iveta Radičová’s coalition government in October 2011. This search has prompted leadership changes, efforts to revamp party programmes, declarations of commitment to ethical political conduct, the establishment of a platform of so-called people’s parties, and even plans to create a coalition for the regional elections this September. However, political scientists argue that what the right-wing parties have done so far – and the way they have done it – may not have been enough to reconnect with voters. 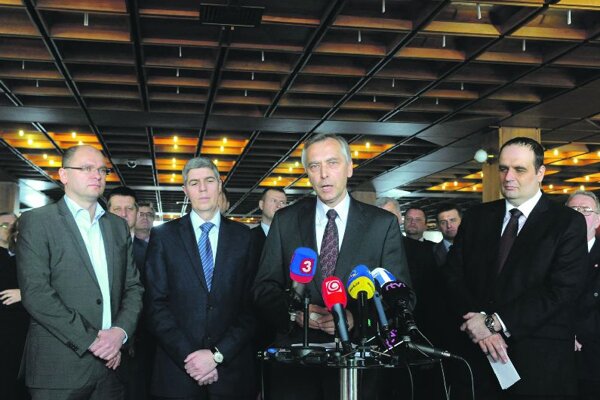 THE CENTRE-RIGHT opposition parties have been searching for ways to win back the hearts of voters who deserted them after the collapse of Iveta Radičová’s coalition government in October 2011. This search has prompted leadership changes, efforts to revamp party programmes, declarations of commitment to ethical political conduct, the establishment of a platform of so-called people’s parties, and even plans to create a coalition for the regional elections this September. However, political scientists argue that what the right-wing parties have done so far – and the way they have done it – may not have been enough to reconnect with voters.

By contrast, Robert Fico’s ruling Smer party recorded a dominant 36.9-percent result in the Focus poll and 41.1 percent in the MVK survey.

A united front in the forthcoming elections?

The SDKÚ, once the pre-eminent force on the centre-right, has said that it will seek a joint platform for the three centre-right parties – the KDH, Most-Híd and SDKÚ – currently united under the People’s Platform banner in the September elections to Slovakia’s eight self-governing regions (VÚCs), including the votes to elect the VÚC heads. The KDH responded that it might recommend that its regional organisations create coalitions within the People’s Platform, but that each region would nonetheless pick the approach it considers best in terms of its electoral prospects, deputy chairman Pavol Abrhan told SITA. The leadership of Most-Híd too passed a similar recommendation for its regional organisations, with deputy chairman László Solymos adding that “it [a united approach] might not be achieved everywhere”.

SDKÚ deputy chairman Ivan Štefanec, however, said that the People’s Platform has been “crystallising naturally as a form of cooperation for centre-right parties in particular areas of the life of society”, SITA reported.

Juraj Marušiak, a political scientist with the Institute of Political Sciences, part of the Slovak Academy of Sciences (SAV), interpreted the SDKÚ proposal to act jointly in the regional elections as an attempt to shape a block to balance the dominance of Smer.

“If the People’s Platform is to have significance in the future, then the result should be a large centre-right party, which would be competing with Smer for dominance in the political arena and for the favour of smaller parties,” Marušiak told The Slovak Spectator, adding that an alliance which would be united only by its opposition to Smer would probably suffer from the syndrome of the now-defunct Slovak Democratic Coalition (SDK).

The SDK, a coalition of opposition parties formed to oust controversial prime minister Vladimír Mečiar, began to disintegrate soon after its election success in 1998, as the parties that had formed it again tried to establish their separate political identities.

Ján Baránek, a sociologist working for Polis, a polling agency, said he does not believe that achieving a united approach in the regional elections will be possible everywhere.

“There are places where the coalitions are already shaped and which might simply get repeated: for example in Nitra there is the so-called ‘Large Slovak Coalition’ which serves to prevent the [ethnic] Hungarians getting back into power,” Baránek said. “I do not consider it [the SDKÚ proposal] a thoroughly considered idea and it seems hasty to me.”

Baránek noted that local and regional politics is one thing, but that national or what he called “big politics” is another – and the platform is not applicable everywhere.

Pavel Haulík, head of the MVK polling agency, said that the idea of a joint front is good in principle but the question remains whether the parties are able to fulfil it.

“It seems that it is always easier to make such a call than fulfil it, since each party has specific interests and very similar voter potential and thus it will be quite complicated to seek an agreement,” Haulík said, adding that voters might still appreciate a certain level of coordination. “Of course the question is whether, let’s say, more liberal voters who stayed in the SDKÚ would incline to the conservatisation of the party.”

Is the SDKÚ improving its appeal?

The SDKÚ, in its efforts to win back disillusioned former supporters, has announced that it will adopt a code of ethics and that violators will be kicked out. As if to drive home this message, the party’s leadership on January 30 dissolved the Nitra branch of the SDKÚ. It was led by Ondrej Ščurka, whose firm Nitra Invest was involved in a rental deal with Slovakia’s Tax Directorate under the last government that was roundly criticised by political ethics watchdogs.

Explaining the decision, SDKÚ leader Pavol Frešo cited dissatisfaction with the party’s results in local elections as well as what he called problems with party primaries. But he also admitted that the decision partly stemmed from the dubious rental case, SITA reported. Ščurka said that he would file an appeal against the dissolution with the party’s internal tribunal.

Marušiak interpreted the dissolution of the Nitra branch of the SDKÚ as “an attempt to repair the tainted reputation of the party, but also as a way of solving internal conflicts”.

“Yet if this results in the escalation of internal party fighting, then it could have fatal consequences for the SDKÚ,” Marušiak told The Slovak Spectator.

Haulík suggests that the SDKÚ will have to do much more than just change its chairman. After the party’s dire performance in the general election last March, Mikuláš Dzurinda resigned and Frešo, who is also president of the Bratislava Self-Governing Region, defeated former justice minister Lucia Žitňanská in a ballot in May 2012.

Haulík noted that in most MVK surveys the SDKÚ polls close to the 5-percent threshold required to make it into parliament, and that even though the SDKÚ is the only party to have changed its chairman since the elections “it seems that the voters did not evaluate this step as prompt enough to solve the party’s problems”.

Baránek sees the declared goal of the SDKÚ to adopt a code of ethics as the “new leadership trying to distance itself from past cases”, but he views this as “only the first step”.

“I see it as a signal to former voters who were disappointed in 2012 and did not vote for the SDKÚ,” Baránek told The Slovak Spectator, adding that he sees it as a positive sign and that it might improve the party’s chances of bringing some former supporters back into the fold.