DOING business successfully is not just about creativity and know-how, but also about judging the reliability of the people you do business with. Business entities in Slovakia now have another tool to verify the credibility of potential business partners, after the Financial Administration of Slovakia began publishing the names of firms that have large outstanding value added tax (VAT) bills. Businesses have welcomed the new register but have also pointed to some potential pitfalls.The Financial Administration on February 4 made public a list of over 1,400 business entities which, in total, owe more than €143 million in overdue VAT. 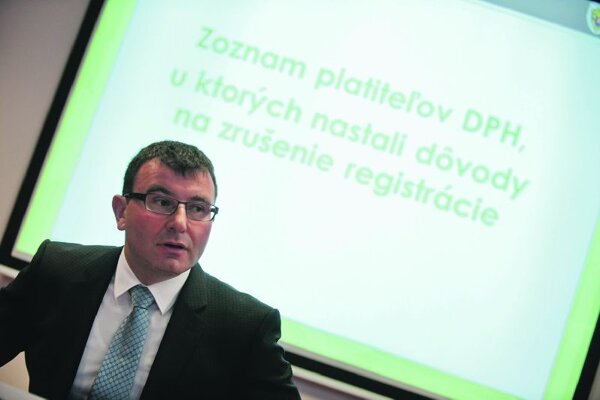 DOING business successfully is not just about creativity and know-how, but also about judging the reliability of the people you do business with. Business entities in Slovakia now have another tool to verify the credibility of potential business partners, after the Financial Administration of Slovakia began publishing the names of firms that have large outstanding value added tax (VAT) bills. Businesses have welcomed the new register but have also pointed to some potential pitfalls.
The Financial Administration on February 4 made public a list of over 1,400 business entities which, in total, owe more than €143 million in overdue VAT.

“This does not mean that this list contains all the entities we consider risky,” František Imrecze, president of the Financial Administration, said when introducing the list. “[But] it is definitively certain that we consider the entities on this list to be risky.”

Businesses and analysts praised the decision to publish the list, but pointed to some potential problems. For instance, it is not currently possible to remove a company from the list once it settles its obligations. Also, companies that fail to meet their VAT obligations due to the failure of their business partners can end up on the list.

Róbert Kičina, the executive director of the Business Alliance of Slovakia (PAS), welcomed the list’s publication in general.

“If a business partner appears on this blacklist, this may mean that dealing with it could be risky,” Kičina told the Hospodárske Noviny daily.

Kičina, in comments to the Sme daily, highlighted some problematic points, for example that the new register is not linked to the Commercial Register, the social network of Slovak business entities www.foaf.sk or the website of debtors www.dlznik.sk. So in his opinion it represents yet another list which companies must scrutinise. He also recalls that companies can slide into insolvency not because of their own failings but because their business partners are late in paying.

Businesspeople complain that it is difficult to enforce the law in Slovakia, and often time-consuming to force, via legal action, a counterparty to pay its debts.

Tomáš Púchly from the F. A. Hayek Foundation warns that the list could unfairly tarnish the reputation of certain companies and that for now the Financial Administration does not have any method by which to remove companies from the list.

Peter Goliaš, director of the INEKO economic think tank, believes that the blacklist increases the pressure to pay taxes properly.

“I would thus welcome a significant reduction in the threshold for making tax debtors public,” Goliaš told Hospodárske Noviny. Currently it is €17,000 for a private individual and €170,000 for a corporate entity.

To avoid the inclusion on the blacklist of companies that failed by just a few days or weeks to file VAT returns and make payments, and which have otherwise met their duties, the administration waited three months to publish the list.

Imrecze explained in comments to public broadcaster RTVS that the administration utilises four criteria when putting companies on the blacklist. The first is that the entity in question has not submitted VAT returns several times during a single calendar year (in general, VAT payers are obliged to file returns every month); second, that it has failed several times to settle its VAT liabilities during one calendar year; third, that it has proved unreachable at its address or other contact points; and, fourth, that it has obstructed tax inspections on several occasions.

The Financial Administration has identified two main objectives in publishing the list. The first is that it enables businesses to check the credibility of their potential business partners. The second is that publication of the list enables the Financial Administration to effectively impose the institute of VAT guarantee introduced by the revision to the law on VAT.

Based on this rule, buyers, providing they are themselves VAT payers, act as guarantors for payment of VAT on goods they purchase if their supplier fails to pay and the buyer had sufficient reason to know this might happen.

According to Daniel Čech, the director general of the tax and customs section at the Financial Administration, the institute of VAT guarantee is an important instrument during tax audits focused on VAT as, based on the lists and planned ratings of business entities, auditors will be able to prove that a particular business could have known that its partner would not pay VAT.

The administration has said it will update the list each month, and is already scrutinising a further 3,000 companies. In total the administration registers over 205,000 VAT payers in Slovakia.
For now the Financial Administration does not have any means to remove companies from the list. It will wait to see how it works in practice and subsequently legislation could be adopted that would permit the removal of a firm from the list if a reason to do so were to arise.

According to Imrecze, in collaboration with the Finance Ministry and the Justice Ministry the Financial Administration is preparing additional measures to improve the risk analysis of VAT payers.

“Over a period of two months, we managed to obtain relevant information from Cyprus about Slovak companies with Cypriot partners,” Imrecze said, as quoted by the SITA newswire.

Bratislava makes up for the biggest share of businesses on the list, 350, something that Imrecze regards as relatively unremarkable, as most companies registered in Slovakia have their main office registered in the capital.

“An interesting fact is that Košice, with 306 entities on the list, placed second, which in respect to the total number of business [there], is a relatively high number,” said Imrecze, adding that Trenčín ended third.

The majority of the companies on the list are in the field of commerce (52 percent), followed by the construction industry (23 percent), cargo road transport (14 percent), consultancy (6 percent) and advertising (5 percent). The aggregate VAT owed by companies on the list is over €143 million. The largest recorded sum owed in VAT stands at €18.7 million. The average debt per blacklisted company is €102,000.

Most of the companies on the list, as many as 1,100, are one-person limited liability companies, according to Hospodárske Noviny.

The revision to the law on VAT was part of the measures the Slovak government adopted last year to combat tax evasion. VAT evasion alone in Slovakia is estimated to be worth up to €1.2 billion per year.

But the president of the Financial Administration said he does not expect that naming companies will mean they actually pay up.

“I assume that most companies which appear on the list are entities which want to do unfair business,” Imrecze said during a discussion programme broadcast on RTVS. “And that they want to perform tax evasion and tax fraud. This means that there is a very high [likelihood] that they have no assets, that they are so-called white horses, so-called disappeared companies and companies which cannot be contacted. We will see how the list develops from the viewpoint of its content, as we will need it during our next analysis, but the probability of recovering these debts is very low. This is necessary to say openly.”