British cuisine: Food from across the British Isles

ANYONE who listens to Susannah Montgomery while she is cooking her favourite Elan Valley soup understands that certain recipes can bring back childhood memories like snapshots in a family album. The British ambassador to Slovakia explains that the recipe comes from the Elan Valley in central Wales and that since her mother’s family comes from Scotland and her father is from the far south of England, “for childhood holidays we sometimes went to Wales as a half-way point for all the relatives to get together”. 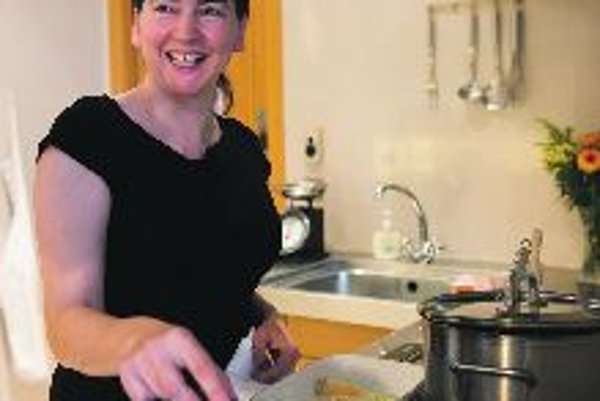 “That was where I first saw the sea,” says Montgomery, while frying the onion in a pan until it turns slightly golden. “The farm was called Merlin, which is the name of a wizard, as you might know, but it is also quite a common name in Wales.”

The Snowdonia National Park, the village of Portmeirion, and New Quay – famous for its dolphins and for being the location of Under Milk Wood, by the great writer Dylan Thomas – are all snapshots of Wales that Montgomery recalls while preparing the soup for the Cooking with Ambassadors programme, prepared by The Slovak Spectator and TV Sme.

Montgomery also mentions Ynyslas, where the remains of a mesolithic fossilised forest appear when the sea is at low tide and “some lovely big beaches where as children we went swimming on horseback”, as the Welsh horses loved the sea.

With the range of food she serves her guests, Montgomery tries to cover the whole of the UK: Welsh soup as a starter; then, as the main course, the ‘Great British Breakfast’. This includes (vegetarian) Scottish haggis, grilled Lincolnshire sausages, Northern Ireland potato flatbread and West Country bacon. For dessert was Northumberland chocolate cake and banana custard. It is served on British fine porcelain plates, with traditional Sheffield silver plate cutlery.

The Elan Valley soup also contains salty Welsh cheese, which Montgomery notes is very similar to Slovak bryndza. As for Slovak food, the British ambassador tries to taste everything, “at least some sips” and applauds the fact that people here in Slovakia still do a lot of home cooking.

“One thing I like about Slovakia is that people grow their own fruit and vegetables,” says Montgomery, who adds that she appreciates the experience of being invited into people’s homes here. “In the UK, the gardens contain just flowers, while here they are really productive as well.”

When asked why she thinks British cuisine is not generally considered among the best in the world, she responds that “actually British food is getting better” and that her homeland also has made a point of learning about as many other nations’ foods as possible. She notes that London has numerous Michelin-starred restaurants.

“Obviously, there are lots of communities, and each one has its own groups of nationality all over Britain,” said Montgomery. “You can basically get whatever you want; all different types of cuisines in London. It’s part of London’s wealth and that’s one of the things I like about the city – that it’s constantly competing, evolving and changing.”

As an example, Montgomery mentions the recipe given to her by her friend Josie from the Cayman Islands, a British Overseas Territory. Banana custard is a traditional British dish, but this recipe gives it a Caribbean flavour.

Montgomery says she thinks the Slovak way of life is healthier than Britain’s, and “I think we should learn, especially from the fact that Slovaks eat a hearty lunch and lighter supper, which is a balanced approach”.

The British ambassador, who first visited this country just before the Velvet Revolution, when it was still part of Czechoslovakia, as an English teacher in a children’s camp called Prvý Máj, especially enjoys Slovakia’s various meats and bryndza cheese, and has also tried different regional variations of Slovak food.

“I’ve been here on holidays ever since, and I couldn’t believe my luck when I got this job here,” Montgomery says, adding that she finds it amazing how much progress Slovakia has achieved over the past 20 years, something she has witnessed for herself: “We have explored a lot of Slovakia; we’ve been to the Tatras, to Košice, Prešov, into the Tokaj area and even to Čierna nad Tisou.”