IN RETURN for its €7 billion contribution to the coffers of the European Union (EU), Slovakia will get more than €20 billion in funding of various kinds between 2014 and 2020, thus the positive balance for the country stands at €13 billion, reported Slovak Prime Minister Robert Fico to Slovak media on February 9, about the outcome of negotiations among EU leaders over the budget framework for the next seven years. 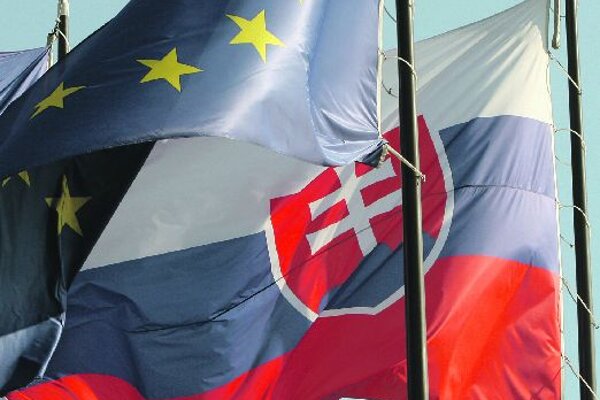 IN RETURN for its €7 billion contribution to the coffers of the European Union (EU), Slovakia will get more than €20 billion in funding of various kinds between 2014 and 2020, thus the positive balance for the country stands at €13 billion, reported Slovak Prime Minister Robert Fico to Slovak media on February 9, about the outcome of negotiations among EU leaders over the budget framework for the next seven years.

“It is a massive difference, and it is clear that it was worth standing up and fighting for these figures,” said Fico, as quoted by the TASR newswire after all-night talks, adding that he believed that his government’s pro-European policies played a crucial role in the results.

The €960-billion budget agreed on by EU leaders, representing around 1 percent of the entire EU’s GDP over the seven-year cycle, will have to be approved by the European Parliament, a process that might take up to several months. The agreed amount represents a decrease of around 3 percent from the previous budget – the first time it has ever been cut.

Vladimír Bilčík, a senior researcher with the Slovak Foreign Policy Association (SFPA) think tank, said that the primary effort of European Union leaders was to reach an agreement, because any delay in the deal would have meant significant problems in the ability of individual member states and EU institutions to plan their budgets for the 2014-2020 period, and this phase of preparation and planning should already be in process.

“There was real time pressure and in this context I see also the fact that the primary goal was also an agreement at the price of certain compromises on the part of all those involved, thus also at the price of having a trimmed budget,” Bilčík told The Slovak Spectator.

Slovakia’s allocation for cohesion – intended to reduce regional disparities – is €13.1 billion in 2011 prices. In terms of the volume of cohesion funds per capita, €344 per citizen, Slovakia comes second, behind only Estonia. The Brussels summit also approved a near-doubling – from €105 million to €200 million – in EU funding towards the decommissioning costs of the Jaslovské Bohunice V1 nuclear power plant.

EU leaders also agreed to allocate €6 billion to treat the problem of youth unemployment in countries where the unemployment rate among young people exceeds 25 percent, something which should benefit Slovakia, the SITA newswire reported.

In response to Fico highlighting the fact that Slovakia received more money for the upcoming budgetary period than for the current one, Bilčík said that “the budget reflects the reality Slovakia is in”.

“We are one of the poorest countries of the eurozone and we are in the position of an overall recipient of money from the European Union,” said Bilčík. “Compared to the expenses we channel to EU coffers, our incomes are much higher. In principle this is something we have known for some time: if the budget is approved we will be in surplus. This is nothing shocking.”

Bilčík, noting Fico’s claims of a significant victory for Slovakia in terms of how much money it will receive from the union and how much it will pay, said: “these are of course impressive numbers, but I think that they were not radically surprising”.

Perhaps in the later stages it was not as much about the volume of funding but rather of being certain that Slovakia would get the money that it really wanted: for agriculture or funding for large infrastructure projects, and that the country got more money for the decommissioning of Jaslovské Bohunice, which was one of its key priorities, Bilčík said.

“Those priorities were in fact fulfilled, so I view it as a positive thing in terms of having clearly set priorities and these being clearly communicated and reasoned,” Bilčík said, adding that nevertheless Slovakia was not the only country in that position. “Slovakia was in [a group] of countries which had similar priorities in relation to structural funds, to joint agricultural policies as well as to the decommissioning of nuclear plants. This concerned Lithuania and Bulgaria as well as us.”

Appearing on a political talk-show broadcast by Radio and Television of Slovakia (RTVS) with Fico on February 10, Slovak Democratic and Christian Union (SDKÚ) leader Pavol Frešo said Slovaks had “prepaid” for the victory since “Slovakia has incurred a bigger sacrifice to save the euro than any other country has”. Frešo pointed to the fact that despite low pensions and low salaries Slovaks have contributed to both EU bailout funds.

“Therefore I really cannot imagine any other result than the one in which Slovakia’s needs are fulfilled and it gets what it deserves,” Frešo added.

Slovak farmers should be better off once the budget passes the EP, as EU leaders approved larger transfers from the programme chapter for development of the countryside to direct payments for farmers, according to SITA. So far, direct payments were limited to a maximum level of 15 percent.

“Thanks to this solution the average level of direct payments in Slovakia will grow from €210 to €246 per hectare in regular prices,” said Fico, adding that Slovak farmers are thus getting closer to the level of their neighbours and should no longer feel that they are being discriminated against.

The Slovak Agriculture and Food Chamber (SPPK) welcomed the approval of the financial framework for 2014-2020. Spokesman Stanislav Nemec said that though the adopted compromise does not secure complete equality for all farmers within the European market, compared to the original EC proposals it represents an improvement in the position of Slovak businesses and farmers in primary production as well as food production during the upcoming programming period.

“The budget is also a positive signal for further negotiations over the reform of the Common Agricultural Policy for the years 2014 to 2020,” said SPPK chairman Milan Semančík in a release for press.

The SPPK considers it important that the level of co-financing from EU funding is moved from the EU-proposed 75 percent to 85 percent, and argues that from the point of view of Slovakia the full repayment of VAT when drawing EU funding will be beneficial.

To the question of why he thinks Slovakia has been granted more money for cohesion policies for 2014-2020 than it was during the current programming period, Bilčík responded that “it was an absolute priority” adding that cohesion pertains to infrastructure projects, mainly construction and renewal of infrastructure. “I assume that there the money will go to large transportation projects.”

According to Bilčík, the government argued that Slovakia was generally falling behind, mainly in economically less advanced regions. Bilčík said that this explained Slovakia’s clear preference for cohesion policies. Nevertheless, he added that it also has something to do with the fact that spending in other budget chapters is set to decline over the long term.

Slovakia has a total allocation in the 2007-2013 period of €11.5 billion, implemented via nine European Regional Development Fund and Cohesion Fund programmes and two European Social Fund programmes. In addition, it receives €220 million via cross-border programmes and €2 billion under the Rural Development Programme. But Slovakia is behind the EU average in its ability to “absorb” EU funds: at 38 percent as opposed to the average 44 percent, according to an official European Commission press release from last November.

EU Regional Policy Commissioner Johannes Hahn met Fico on November 9 to discuss how EU funds can best be deployed to deliver more growth and jobs in Slovakia. The visit came at a critical phase in talks between the member states and the European Parliament on the EU’s next seven-year budget.

“Cohesion policy is the EU’s key investment policy in times of crisis,” said Hahn prior to his November visit to Bratislava, according to an official EC release. “I urge the Slovak authorities to make full use of the funds available to support the competitiveness of small and medium sized companies, to boost research and innovation, and to invest in key transport networks and the sustainable use of natural resources.”

Hahn also added that “Slovakia needs to ensure that is has a business-friendly environment. It must be open and transparent, with both independent and robust control and management systems. These will be essential in boosting investor confidence”.

However, Fico said that moving the EU funding agenda under the Government Office and some legislative changes might bring improvement. Currently EU funds are handled by the Transport Ministry, led by Ján Počiatek. Oľga Algayerová, the government’s secretary for partner agreement on EU funding, confirmed to RTVS that for the 2014-2020 programming period the Government Office would be the central coordination body.