THE RESIGNATION of Pope Benedict XVI, an act unprecedented in the modern history of the Catholic Church, did not fail to surprise churchmen, believers and observers around the world, including Slovakia. 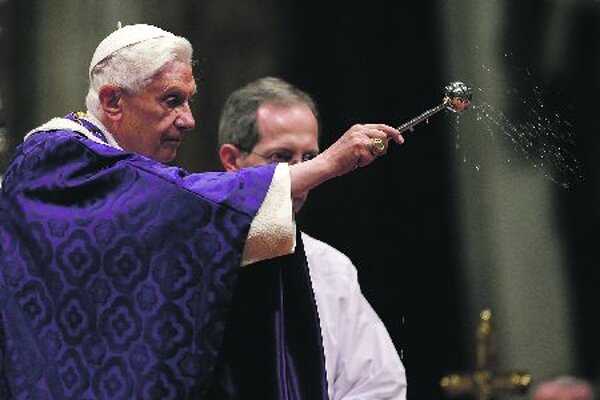 THE RESIGNATION of Pope Benedict XVI, an act unprecedented in the modern history of the Catholic Church, did not fail to surprise churchmen, believers and observers around the world, including Slovakia.

“We have received the news with surprise,” the spokesperson of the Conference of Bishops of Slovakia (KBS), Jozef Kováčik, told The Slovak Spectator, adding that the Pope’s step is nonetheless fully in line with canon law and the rights of the Pope.

Canon law stipulates that the Pope’s resignation is only valid if the decision to give up the office is free and appropriately expressed. Pope Benedict XVI announced his decision to the College of Cardinals that convened at the Vatican on February 11. Slovak Cardinal Jozef Tomko was among them.

“He is a man who takes his duties 100-percent, and perhaps that’s where one should look for the roots of his decision; but these are just guesses as to why he took such a radical step,” Cardinal Tomko said in his reaction to the Pope’s resignation, as quoted by the Sme daily.

Former Trnava Archbishop Róbert Bezák, who was dismissed from his post under Pope Benedict XVI amid much controversy in 2012, also said the news was unexpected and surprising, and noted that the Pope is 85 years old, which is an extremely old age, adding that if the Pope’s idea was to step down because he fulfilled his duties, “it is even more fascinating for me and the man is even more noble for me in his expressions”.

The head of the KBS, Bratislava Archbishop Stanislav Zvolenský, also expressed surprise and admitted that the Pope’s decision initially left him saddened.

“But after I read the words of the Holy Father more closely, I realised that this is an exceptionally big decision,” Zvolenský said, as quoted by Sme. “Perhaps it will take us some time to understand it better.”

Joseph Ratzinger was much less popular among Slovak believers than his predecessor, Pope John Paul II, the first Slavic Pope, who visited Slovakia three times during his papacy and repeatedly expressed warm feelings towards Slovakia and its inhabitants.

Benedict XVI never paid a visit to Slovakia as Pope. He received several invitations, most recently to attend the upcoming July celebrations of the anniversary of the arrival of Ss Cyril and Methodius to this part of Europe.

“Cardinal Ratzinger visited Slovakia before he was elected Pope and several Slovaks were among his close collaborators,” Kováčik noted concerning the Pope’s relationship to Slovakia.

Slovakia appreciates the all-round effort of Holy Father Benedict XVI to address the problems plaguing humanity and foster a dialogue between cultures and religions, according to Foreign Ministry spokesperson Boris Gandel.

Slovak President Ivan Gašparovič received the announcement of resignation made by Pope Benedict XVI on Monday with surprise, stating that the Pope represents the strong moral authority of the Catholic Church.

Prime Minister Robert Fico said he received news about the Pope’s resignation with respect towards his private decision.

“I have viewed Benedict XVI during his pontificate as a defender of traditional values who was intensely interested in global happenings,” Fico stated.

No Slovaks in conclave

The Slovak public has found little reason to get excited about speculation over who will take up the Papal chair next.

There are currently two Slovak cardinals, Cardinal Tomko and Cardinal Ján Chryzostom Korec, but they are both well over 80 years old, the limit set by Pope Paul VI in 1970 for cardinals to be eligible to participate in the papal conclave that elects the Pope.