The limits of the tabloid media

A glossary of words as well as an 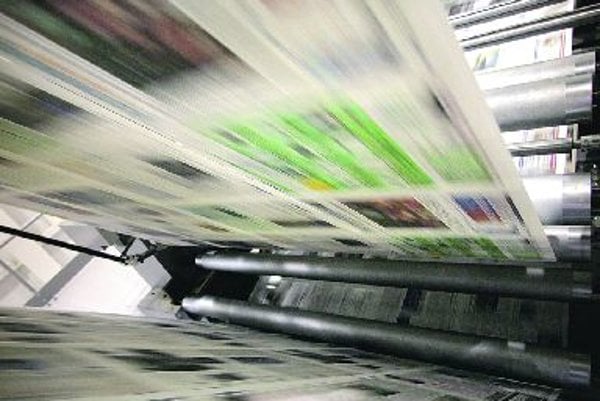 Another issue rolls off the presses (Source: SME)
Font size:A-|A+0

SLOVAKIA’S licensing authority has imposed a hefty fine of €33,000 on private broadcaster TV JOJ for screening a scripted reality show called Extreme Families. The Council for Broadcasting and Retransmission (RVR) found that parts of the show violated provisions of the law intended to protect human dignity, i.e. the right to be treated in a dignified way. TV JOJ describes the programme as depicting six families that stand out “due to their lifestyle, unusually high number of children, and unexpected traditions and customs”.

Last year, another reality show broadcast by JOJ, Farmer Seeks a Wife, in which women bid for the hearts of single Slovak farmers, prompted Culture Minister Marek Maďarič to announce that his department would seek to regulate broadcasting time limits for programmes that included what he called “vulgarities” and which he said “dishonour” human dignity. Maďarič also called on media professionals to initiate an open debate over programmes like Farmer, which he saw on September 8, 2012, and which he described as “barbarising” the nation.

RVR head Miloš Mistrík explained to The Slovak Spectator that the Law on Broadcast and Retransmission bans broadcasters from violating the human dignity of others, including those who appear in programmes, via the programmes themselves or the way they are prepared. According to Mistrík, in the programme Extreme Families this happened in multiple ways at the expense of several people appearing in the show.

“Reality shows have for several years been among the basic pillars of television broadcasting: they are given prime time and quite extensive airtime, with multiple replays,” Mistrík told The Slovak Spectator. “To a large degree they have also changed the overall image of media.”

Mistrík said that, in general, such programmes bring down the quality of broadcasting, infantilise audiences and offer mainly negative role models.

It was aspects of reality shows that prompted the Ministry of Culture to propose the introduction of a regulation which will limit broadcast of content unsuitable for children under the age of 15 to between 20:00 and 6:00. The new regulation will become effective as of April 1, Culture Ministry spokesman Jozef Bednár told the SITA newswire.

According to the ministry, the goal is to enhance the protection of children from content that could have an adverse effect on their development.

Mistrík noted that something similar already exists in many European countries.
TV JOJ said last year that broadcast time limits would disadvantage private broadcasters, and suggested that Maďarič instead focus his attention on the penetration of foreign television broadcasts into Slovak territory, mainly those in Czech, which are understandable to Slovaks and which are not subject to any regulation, the TASR newswire reported.

Zuzana Mistríková, the vice-president of the Slovak Film and Television Academy, was quoted by the Sme daily in September 2012 as saying the state should not regulate television broadcasts more strictly.

When asked about options to regulate so-called tabloid content like reality shows, Július Lörincz, the head of Press Council of Slovak Republic, a journalism ethics watchdog, told The Slovak Spectator that “the word regulation sends chills down my spine. I hope that no relevant people will consider administrative regulation.”

Pavol Múdry, the head of the Slovak arm of the International Press Institute (IPI), said he did not think that any regulation of media content – even tabloid content – was needed.

“We have a good law on the periodical press and newswires, a law on broadcast and retransmission, the Codex of Ethics of Journalists and codes for specific media; in my opinion that is enough,” Múdry said, when asked if there was a way to regulate tabloid content.

When asked to assess the operation of Slovakia’s tabloid print media, Múdry said that it is neither extremely aggressive nor toothless. It does sometimes cross the line, especially when reporting highly unethically on the health condition of certain people, Múdry added.

“We are witnessing a paradox: many speak about tabloids with disdain, even criticising them – but these are the same people who are reading them,” Lörincz said, adding that he is indifferent towards them.

According to Múdry, it is readers that actually set tabloids’ limits, which he believes should lie at the point of entry to someone’s private life in association with health problems, among others.
Múdry said that Slovak tabloids are similar to those in the Czech Republic, but are more tabloid and aggressive than the Austrian tabloids, which in his opinion have burned out and are no longer that popular.

“On the other hand we know what has happened in recent years in Great Britain, where tabloids violated every norm of acceptability and privacy protection,” Múdry added.

WHEN it comes to the more serious end of the media spectrum – so-called ‘hard news’ – analysts differ in their verdicts over how well Slovakia does.

Július Lörincz, the head of Press Council of the Slovak Republic, a journalism ethics watchdog, opines that news here tends to focus on describing a situation or a problem, but lacks deeper investigation or a search for causalities.

Miloš Mistrík, the head of the Council for Broadcasting and Retransmission (RVR), Slovakia’s licensing authority, also points to a tendency to combine the entertainment aspect of tabloid presentation with hard news content – so-called “infotainment” – saying that this may corrupt its objectivity and reduce the amount of information it provides.

Private broadcaster TV Markíza has made perhaps the sharpest turn from news to infotainment, since changing its head of news last year and starting to use more music and more dynamic visuals. Henrich Krejča, the new head of TV Markíza news, who replaced Lukáš Diko on October 1, 2012, said in an interview for the Sme daily that “I want it [news] to have freshness, so that it will be cinema”.

On the other hand, Pavol Múdry, the head of the Slovak arm of the International Press Institute (IPI), said that the Slovak media in general provides every kind of content, including investigative journalism.

“Sometimes the investigation is done negligently, inconsistently and above all it is not [properly] completed; sometimes a journalist, unmonitored by an editor or chief editor, plays at investigator, prosecutor and judge in one person,” Múdry said, adding that “however, during the past 15 to 20 years Slovak journalism has made a great step forward, but I would nevertheless hope for even better.”

Múdry sees the threat of prosecution that some reporters face in association with their work as a problem for serious journalism in Slovakia. He points to paragraphs of the Criminal Code dealing with libel, for which penalties range from one to eight years in prison, and says these do not belong there.