During the Carnival season, old folk traditions are revived in eastern Slovakia

IN THE time leading up to Lent, the period of fasting before Easter, events organised across Slovakia revive old folk traditions. In the Zemplín region of eastern Slovakia, the local administration organises a host of Carnival/Shrovetide events. 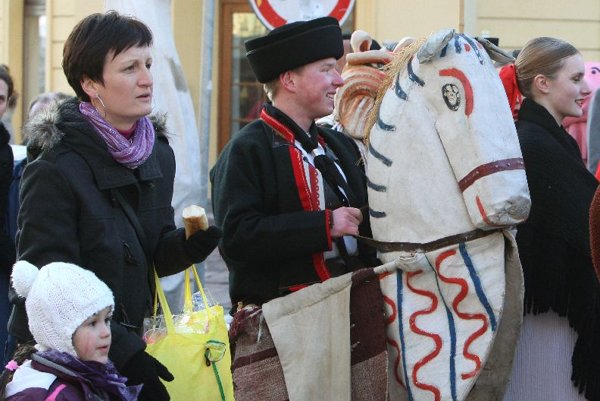 IN THE time leading up to Lent, the period of fasting before Easter, events organised across Slovakia revive old folk traditions. In the Zemplín region of eastern Slovakia, the local administration organises a host of Carnival/Shrovetide events.

In Vranov nad Topľou, a traditional pig-killing, or “zabíjačka”, took place at the end of January, while in Pavlovice nad Uhom (in the district of Michalovce), poultry feathers were processed for use in blankets.

“Several years ago, we in our municipality returned to the interesting tradition of our ancestors, feather processing. On January 26, we made them for the third consecutive time,” Pavlovice mayor Mária Dufincová informed the TASR newswire. She added that the municipality was able to secure a sufficient amount of feathers, as several local farmers breed geese and ducks. “More than 350 local women participated in this old custom, while men made traditional kitchen tools out of them,” she explained.

In the local culture house, where the processing of feathers took place, traditional meals were served using the recipes of grandmothers. In Pavlovice, sweet corn used to be cooked during winter and was put into water to soften and swell, to be made into a sweet dish later. “We also made cakes from rising pastry and a local delicacy called beučutek [boiled yellow pumpkin],” she said.

In Vranv nad Topľou, the first year of the traditional Shrovetide pig-killing was organised in the local elementary school in the Juh (South) borough. “Pig-killing delicacies were offered there, and we invited people to come in traditional Carnival masks to add to the festive mood,” Eva Mitaľová, spokesperson of the Vranov town-council told TASR.