RADOSLAV Procházka, who last year criticised the direction of the Christian Democratic Movement (KDH) and established his own platform, named Alfa, has now decided to quit the party – and suggested he may make a bid for the presidency. KDH leader Ján Figeľ described Procházka’s move as contributing to the fragmentation of the right wing, while political analysts said that it was neither the first nor the last departure from the established centre-right parties. 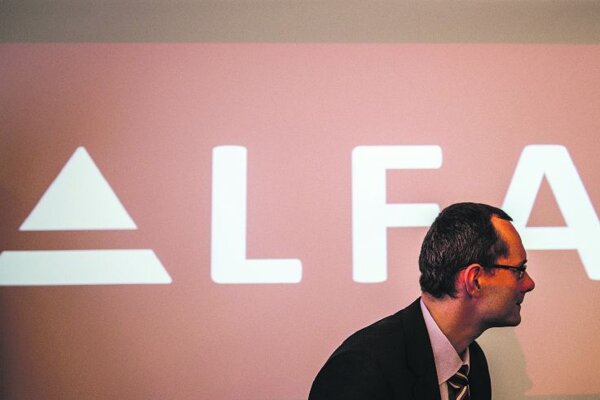 RADOSLAV Procházka, who last year criticised the direction of the Christian Democratic Movement (KDH) and established his own platform, named Alfa, has now decided to quit the party – and suggested he may make a bid for the presidency. KDH leader Ján Figeľ described Procházka’s move as contributing to the fragmentation of the right wing, while political analysts said that it was neither the first nor the last departure from the established centre-right parties.

Meanwhile, Slovak Democratic and Christian Union (SDKÚ) MPs Lucia Žitňanská and Miroslav Beblavý have started a political project, entitled We Are Creating Slovakia, which they describe as a series of discussions outside the party base in which they hope to find people whose potential is not currently being utilised. While Žitňanská and Beblavý were quick to stress that they do not intend to establish a new party, their initiative has prompted questions about what might come next.

Grigorij Mesežnikov, president of the Institute for Public Affairs (IVO), said that the right wing has been undergoing fragmentation since its defeat in last year’s general election.

“It is in a state of mild depression,” Mesežnikov told The Slovak Spectator. “Changes which emerged in some of the parties were not sufficient for the right wing to renew its positions.”

The centre-right parties have not been able to boost their voter appeal and their resultant stagnation is the reason why some of their leading members are opting for alternative solutions, said Mesežnikov. According to him, another factor contributing to this fragmentation is that the right wing includes several people with strong political ambitions who are now “testing their chances”.

The departure of Procházka may not be the last personnel change the right wing experiences, Mesežnikov added.

Political scientist Miroslav Kusý said that Procházka did not start the process of fragmentation on the right and that departures and changes are not confined to the KDH.

“It is a phenomenon of the right wing, which lost the elections and is now feeling the consequences,” Kusý told The Slovak Spectator, adding that all these steps should be leading to some kind of recovery at some point. “Will this actually result in an improvement? So far I am sceptical because it has only been a process of decline to date.”

When announcing his departure, Procházka said that the right wing must experience fragmentation today so that in the future it can unite again. He also explained that he felt compelled to offer his own concept.

“This is not the time to resign and give up, but on the contrary to try and write one’s own story,” Procházka said, as quoted by the SITA newswire.

When he launched his Alfa platform last year Procházka said he aspired to win over people within the KDH to his programme, and gain a mandate to push it through. But on January 26 this year he announced that he would never run on a KDH slate again. Procházka said his decision was prompted by what he called the party’s lack of interest in his programme.

On February 18, Procházka was reluctant to answer journalists’ questions about whether he would work towards a presidential candidacy, but in an interview published two days later in the economic weekly Trend, he said he was ready to run in the spring 2014 presidential election as a centre-right candidate.

“I do not want to run as a civic candidate,” Procházka said, as quoted by Trend, adding that he wants to stand “as a candidate of a ‘new right’ able to view the country not only within the terms of what’s right and what’s left, but from a broader perspective”.

For Mesežnikov, Procházka’s departure is linked to the fact that he has failed to push through his preferred style of politics within the KDH.

The KDH saw one of its deputy leaders, Daniel Lipšic, along with another MP quit the party soon after last year’s general election. They set up a new party, New Majority (NOVA), in autumn 2012.

When looking at the reasons why Procházka did not leave the KDH at the same time as Lipšic, Mesežnikov suggested that “perhaps he felt greater loyalty” since he had been involved with the KDH for a relatively short period (he was first elected as an MP for the party in 2010).

Procházka has not yet said whether he will join Lipšic’s party, which in the most recent opinion polls has recorded support of around 5-percent, the minimum required under Slovakia’s electoral rules to win seats in parliament.

For Mesežnikov it seems that Procházka is considering proceeding independently in politics, perhaps within a new project, but that it is not yet clear how this might look: whether it would ultimately be a political party, or a platform which would work towards establishing a party for the next parliamentary elections.

“It is all open for now,” said Mesežnikov.

Žitňanská and Beblavý of the SDKÚ plan to hold a series of extra-party discussions all around Slovakia. They said that “the political solutions of the 90s are no longer enough, and seeking solutions calls for new visions”.

“There are lots of people in Slovakia whose potential is not being put to use, despite the fact that this potential might be greater than anything the administrations governing the country have,”

Žitňanská said when introducing the pair’s plan on February 15, as quoted by the TASR newswire.
According to Žitňanská, partisan politics does not interest such people and this is why the answers cannot be found today within the political parties.

There are enough parties in Slovakia, Beblavý told SITA on February 19, explaining that neither he nor Žitňanská were pursuing the establishment of a new party.

Commenting on the initiative of the two SDKÚ deputies, Mesežnikov said that it is a tool to strengthen their position in the party, adding that it does not necessarily have to lead to the establishment of a new one.

“It is a way of testing support for the type of politics they stand for and which perhaps has not met with more significant support from within their own party,” Mesežnikov said.

According to Mesežnikov, it also is a signal to the leadership of the SDKÚ as well as its members that there are people within the party who wish to put a different imprint on the SDKÚ.

“Yet it could also be an attempt to strengthen the popularity of the whole SDKÚ, especially the group they represent,” Mesežnikov said, adding that they might ultimately quit the party. “However, so far they have not used rhetoric which would imply that they want to leave the party.”

Kusý noted that SDKÚ leader Pavol Frešo was surprised by their move, and the fact that Žitňanská had not previously discussed it with him – and commented that in this sense it was a kind of “destructive step towards the party”. The political scientist added that it is hard to guess what will come of their initiative.

Centre-right wing parties need to engage in closer co-operation in order to offer a viable alternative to Smer and not fragment any further, as that only benefits the social democrats headed by Robert Fico, Frešo told TV news channel TA3.

In response to the Žitňanská-Beblavý initiative he said that everyone in his party enjoys sufficient leeway in terms of contributing towards the party programme and such individual activities are not good for the centre-right.