Modern dance seen through a peephole

THE SLOVAK word Fuga means, especially in colloquial use, something more along the lines of a peephole than what it might actually resemble, a musical fugue. Indeed, in the dance piece Fuga, which recently premiered at the elledanse dance theatre, we get the chance to peep (literally and symbolically) through the holes in a screen into the private emotional space of four people. 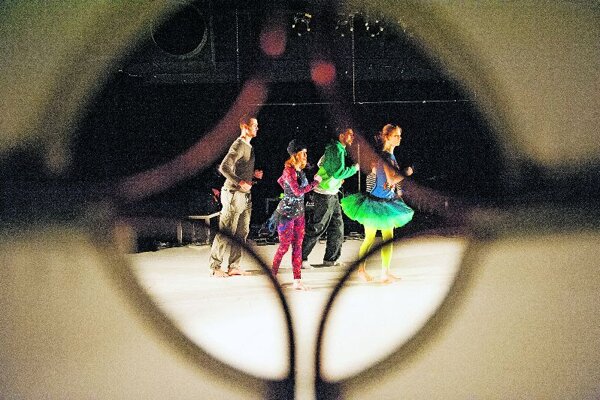 The dancers, as seen through the fuga. (Source: Lea Lovišková)
Font size:A-|A+0

THE SLOVAK word Fuga means, especially in colloquial use, something more along the lines of a peephole than what it might actually resemble, a musical fugue. Indeed, in the dance piece Fuga, which recently premiered at the elledanse dance theatre, we get the chance to peep (literally and symbolically) through the holes in a screen into the private emotional space of four people.

At the beginning of the performance, directed by Lucia Holinová, a giant screen containing a few holes forms a barrier between the audience and the stage. The audience, frustrated that their view is obstructed, naturally wish for it to be taken down so they can better see what might be happening behind it; and indeed, the sophisticated folding screen is disassembled piece by piece and taken away over the course of the show to offer a view of four young people, each conveying their different personalities, temperaments, mannerisms, reactions and expressions through dance.

A crucial element of Fuga is the live music of the band MED (which has been active for 15 years), which “incorporated into the performance a selection of its songs which complete the plot of Fuga; but it also created original, new music specifically for the theatrical piece, together with the dancers”, as the press release states.

“Music is a natural part of our lives, we hear it all around us. And the music of MED brought the dancing on stage to a less formal level, making it more grounded,” the Fuga press release continued.

“We study three situations onstage,” Holinová is quoted in the press release. “How people feel when they are alone, unobserved in their personal space – whether it is liberating for them and whether they can do whatever they want, or quite the contrary: whether they control themselves even more in their own solitude. Secondly, how they feel when they know they are observed, for example in public spaces, where people pass them by. And finally, how they behave when they are observed without knowing it. And we don’t leave out the feelings of the observer himself, either,” she explained.

Lucia Holinová belongs among the first graduates of the programme of pedagogy of modern dance at the Department of Dance Creation at the Academy of Performing Arts in Bratislava. She is a dancer, choreographer and teacher who was mostly active in contemporary dance until 2002. During her studies, she performed the Gagarin duet with Milan Kozánek, which was the first time a duo performed an improvisational dance in a professional theatrical setting in Slovakia, the www.slovakia.culturalprofiles.net web-portal wrote. Afterwards, she danced and created in the a dato group, and started to create her own pieces, like Škára in 2001 – a predecessor to Fuga (also featuring the live music of MED).

Fuga might not be an unforgettable once-in-a-lifetime experience, but it offers a fresh take on an issue as old as humankind itself. The dances performed were a contemporary mix of hip hop, electric boogaloo, rock and roll and others. The four dancers, representing four human archetypes, are Soňa Ferienčíková, Michaela Nezvalová, Radoslav Piovarči and Miro Janík. On February 9, the Fuga performance was followed by an ImproJam, an improvised jam session by dancers, including not just performers from the piece or regulars from elledanse, but by anyone from the audience who dared to join the seemingly chaotic and unorganised dance MEDley, again to the live music of MED, which was a tempting challenge.