SEVERAL new exhibitions have recently opened at the Bratislava Castle complex, which also houses the Historical Museum of the Slovak National Museum, focusing on an array of subjects, from the arrival of Ss Cyril and Methodius, to the 2012 fire at Krásna Hôrka Castle. 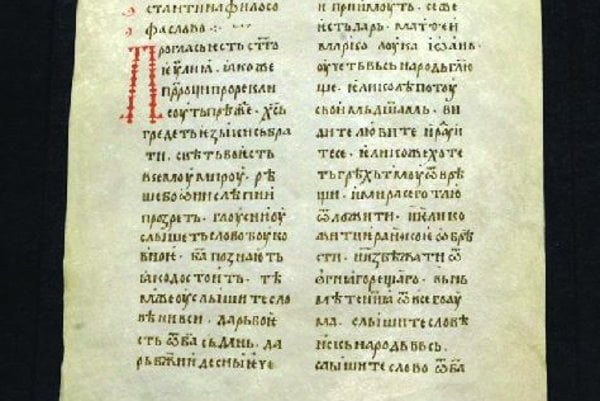 SEVERAL new exhibitions have recently opened at the Bratislava Castle complex, which also houses the Historical Museum of the Slovak National Museum, focusing on an array of subjects, from the arrival of Ss Cyril and Methodius, to the 2012 fire at Krásna Hôrka Castle.

Bratia, ktorí menili svet / Brothers who Changed the World celebrates the anniversary of the 9th-century arrival of Byzantine Greek Christian missionaries, brothers Cyril and Methodius from Thessalonica, who are credited with bringing the Glagolitic alphabet to the regions that today make up Slovakia and the Czech Republic. The exhibition, which runs from February 21 to April 2, accompanies a conference about the brothers, and examines their missions and the way in which their influence extends to the present day, the SITA newswire wrote.

Two photography exhibitions document more recent history. Také je Slovensko / This is Slovakia, open until March 15, depicts life and developments in the country over the last 20 years as seen through local photographs.

The other exhibit, 20 na českých a slovenských námestiach / 20 Years in Czech and Slovak Squares, marks the 20th anniversary of the split of former Czechoslovakia, as well as the Velvet Revolution that preceded this split and toppled the communist regime.

Painter Rudolf Fila has created some new pieces with his son, photographer Viťo Fila, and the results are typical of his work: they are re-makes that transform original works of art into something new, offering a fresh perspective, the museum informed. Fila Senior celebrated his 80th birthday in 2012. The exhibition Rudolf Fila + Viťo Fila = 1 Dielo 1+1=1=2 that runs until the end of March was made specifically for the newly reconstructed premises of the castle.

The Krásna Hôrka na Bratislavskom hrade / Krásna Hôrka at Bratislava Castle exhibition shows a video of the fire that devastated Krásna Hôrka Castle in eastern Slovakia one year ago, and contains artefacts that were saved or destroyed in the blaze. The exhibition runs until March 31.

It is advisable to ask someone in the ticket office about information available in other languages.