The jobless rate in Slovakia continues to increase, hitting new records each month. Analysts and politicians attribute its rise in December 2012 to over 14 percent, its highest level in nine years, to the economic situation in Slovakia and the influence of the whole eurozone, as well as to consolidation measures adopted by the second government of Robert Fico. The government and the prime minister nevertheless remain optimistic about the unemployment rate and are promising creation of new jobs. Many analysts and employers do not share their optimism, however, and do not expect the situation to improve until next year. 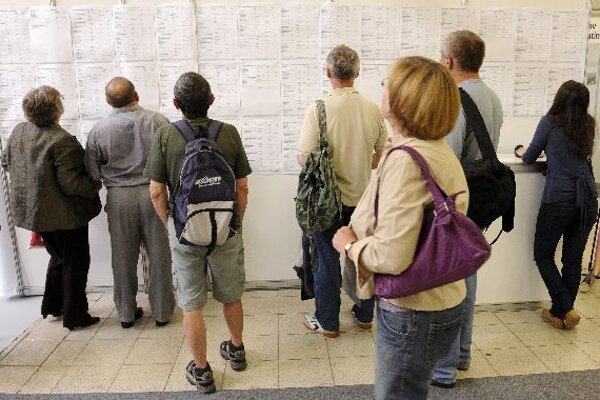 The jobless rate in Slovakia continues to increase, hitting new records each month. Analysts and politicians attribute its rise in December 2012 to over 14 percent, its highest level in nine years, to the economic situation in Slovakia and the influence of the whole eurozone, as well as to consolidation measures adopted by the second government of Robert Fico. The government and the prime minister nevertheless remain optimistic about the unemployment rate and are promising creation of new jobs. Many analysts and employers do not share their optimism, however, and do not expect the situation to improve until next year.

“I would like to ask everybody not to be surprised by the growing unemployment in Slovakia because it is growing across the whole eurozone,” Prime Minister Robert Fico said in response to the rising unemployment rate. “It is not possible to remove Slovakia from the context of the eurozone, because we are such an open economy that actually 85 percent of our production ends up in eurozone countries.”

The opposition Slovak Democratic and Christian Union (SDKÚ) described the increase in unemployment as the first symptom of Fico’s consolidation measures, including the hike in taxes and payroll taxes and changes to the Labour Code.

“What has been happening is what we have called the assassination of Slovakia’s economy,” SDKÚ head Pavol Frešo said in response to the growing unemployment figure, as cited by the TASR newswire.

Another opposition party, the Christian Democratic Movement (KDH), sees similar reasons behind the rising unemployment. Miloš Moravčík, the KDH vice-chairman for public finances, recalled that as early as July, 2012, the KDH warned the government that the significant increase in taxes and payroll taxes would cause an increase in unemployment.

“Alas, already thousands of Slovaks are paying for the arrogance and ignorance of Smer,” said Moravčík as cited by TASR.

The increase in unemployment in Slovakia was triggered by the financial and economic crisis that hit the country back in 2008. At that time many companies responded to a drop in orders with mass layoffs and by optimising their operations.

“We are witnesses to a relatively steep increase in unemployment since October 2012, which by its dynamics is similar to developments in the middle of the crisis year of 2009,” Peter Goliaš, director of the economic think tank INEKO told The Slovak Spectator. “The reason behind the growth in unemployment during the last quarter of 2012 is the slowdown in Slovakia’s economic growth as a consequence of external influences, like the recession in the eurozone and the weakening of economic growth in Germany, and measures adopted by the [Slovak] government, of which the increase of direct taxes and payroll taxes and the tightening of the Labour Code have the worst influence over the creation of new jobs.”

With regard to the hike in taxes and compulsory contributions, he specified the increase in payroll taxes of people working via contracts known as “na dohodu”, i.e. agreements on performance of work, whose extent does not exceed 350 hours per year, and self-employed with low incomes, as the worst of the new measures. In the case of the Labour Code, he listed the reintroduction of employees’ entitlement to a layoff notice period as well as severance pay as the changes that affect unemployment the most.

The steep December increase in unemployment surprised some analysts.

“We expected an unemployment rate above 14 percent, but the growth by as much as 0.5 percentage points surprised us, alas, negatively,” Eva Sadovská, analyst with Poštová Banka, told The Slovak Spectator.

On the other hand, when seasonal factors are taken into consideration, Ľubomír Koršňák, senior analyst with UniCredit Bank of Slovakia, said that he does not believe the increase represents a fundamental change in the unemployment rate.

“Unemployment remained, surprisingly, almost unchanged in December in comparison with the previous month, when seasonal factors and the decrease in the sick leave rate are taken into consideration,” Koršňák wrote in a memo. “The increase in the number of unemployed in October and November was caused especially by a lower number of people who were able to find a job. The influx of new unemployment into the registers did not increase fundamentally, but employers were more cautious when hiring a new labour force.”

Unemployment increased in all regions of Slovakia during December. Banská Bystrica Region reported the highest jobless rate, at 20.81 percent, and thus overtook Prešov Region, with its rate of 20.66 percent. Košice Region came close to the 20-percent level with a 19.58-percent unemployment rate.

“We view as negative the situation in which one fifth of economically active citizens are jobless in as many as three regions,” said Sadovská, adding that while Bratislava Region has the lowest unemployment rate, it still exceeds the 6-percent level.

Sadovská pointed out that the number of long-term unemployed and unemployed youth remains high.

“These are groups of citizens which have been searching for jobs with even greater difficulty,” Sadovská said, citing data of the ÚPSVaR, according to which over 295,000 jobseekers are classified as disadvantaged and make up more than two thirds of the number of jobseekers registered at job offices.

Sadovská does not expect any dramatic change in the development on the labour market in 2013.

“Unemployment will remain high,” said Sadovská, estimating its average level at 14.15 percent over 2013.

“December and January are two months when unemployment reaches its peak,” Kozub wrote in his memo. “Seasonal jobs practically do not exist, neither in construction nor in agriculture, and thus the unemployment rate has nothing to slow it down and help to restrain its level.” January figures may also reflect employees who were “preventively” laid off due to the revision of the Labour Code and weaker economic

growth at the end of 2012 and the beginning of 2013. However, any impacts that the revision to the Labour Code has on unemployment can be assessed only later during the year. In general, analysts expect the labour market to gradually stabilise over the course of the year.

While the Minister of Labour, Social Affairs and Family, Ján Richter, attributes the rise in unemployment exclusively to the economic situation in Slovakia and abroad, the current government has reiterated that combating unemployment is its biggest challenge.

“We will fight for the salvation of each job,” said Fico as cited by the SITA newswire.

The government aims to solve high unemployment by implementing programmes created by the Labour Ministry, revising the law on social services (which still needs a nod from the Slovak parliament), supporting the creation of new jobs, granting stimuli to large companies already established in Slovakia as well as encouraging investments that will bring new jobs, especially to less developed regions of the country.