Adjusting to needs of the market

A Alack of qualified labourers in certain industrial sectors, an overly complicated system of school financing and too many young people studying subjects in humanities are some of the most troubling factors affecting the Slovak education system, according to Education Minister Dušan Čaplovič. His solutions, however, have not been universally welcomed. Foreign businesses continue to stress fostering ties between academia and business and are ready to offer a slew of recommendations for the minister to consider. 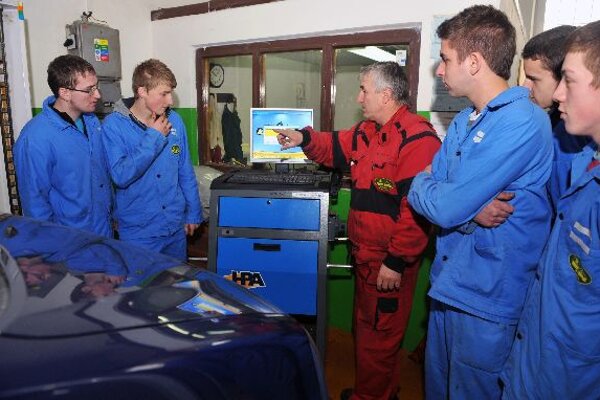 A Alack of qualified labourers in certain industrial sectors, an overly complicated system of school financing and too many young people studying subjects in humanities are some of the most troubling factors affecting the Slovak education system, according to Education Minister Dušan Čaplovič. His solutions, however, have not been universally welcomed. Foreign businesses continue to stress fostering ties between academia and business and are ready to offer a slew of recommendations for the minister to consider.

“The goal is to adjust professional education and preparation to the needs of the labour market, increase the number of graduates from secondary professional schools and increase the interest of elementary school students in studying at these schools while supporting study in fields that are required by the labour market but which currently have a low number of students,” Čaplovič commented, as quoted by public broadcaster Slovak Radio on September 20, 2012, when the first set of changes he proposed to the education system was passed in parliament.

The approved laws included, among other things, stricter conditions for the admission of students to secondary grammar schools (known in Slovakia as gymnasiums; these tend to be the most academic schools and are viewed as natural feeders into the university system) as well as new powers for Slovakia’s eight regional governments (VÚCs) to decide on the number of first-grade classes that can be opened at such schools.

As of September 2014, entrance examinations for gymnasiums will become compulsory and only pupils who score higher than 90 percent in national tests for math and Slovak will be admitted. In 2012 such test results were achieved by only 715 of the 40,000 ninth-grade pupils who took the tests.

In addition, only pupils with a grade-point average of 2.0 can be admitted to gymnasiums, while secondary professional schools should admit only students who earn an average of 2.75 or better. In Slovakia, school pupils are graded according to a five-point scale on which 1 is excellent and 5 is a failing grade.

“I consider it a step back and a short-sighted decision that puts a large group of children at a disadvantage,” Ctibor Košťál, director of the Slovak Governance Institute (SGI) non-governmental think tank, told The Slovak Spectator.

Schools have their doubts

Some in the education sector have taken a critical view of the new rules.

“We cannot expect that a stricter criterion of grade averages will solve the quality of education,” Pavel Sadloň, president of Slovakia’s Association of Headmasters of State Gymnasiums, told The Slovak Spectator. In the past, pupils with a lower average would not even think of applying to a secondary school that was considered difficult or demanding. Currently, primary school pupils lack the motivation to study harder, knowing that there are 80,000 vacant seats at secondary schools every year, compared to the 40,000 pupils leaving primary schools annually. Therefore, Sadloň believes there is a need to optimise the network of schools, but new gymnasium sections keep being added to the network instead.

Saskia Repčíková, from the Association of Private Schools and Schooling Facilities, noted in an interview with The Slovak Spectator that grades from two schools are hardly comparable. General study predispositions should be taken into account as well when admitting a pupil, she said.

“Schools, in cooperation with pupils and parents, should focus on uncovering the individual talent and predispositions of a candidate as early as the admission process,” Repčíková said. “Rather than grades from particular subjects [the school] should judge its ability to fully unfold the potential of every child that applies.”

Čaplovič made it clear from the beginning that he was not going to give extensive support to gymnasiums or secondary schools that teach comprehensive curricula, nor to preparing pupils for careers in humanities and medicine or technical university studies. One of his arguments against supporting gymnasiums was that there are too many university graduates majoring in humanities with slim chances of securing work on the labour market.

“If we have a problem in vocational schooling, it isn’t the fault of gymnasiums, as it is often interpreted, but rather a systemic error in the network of schools,” Sadloň said.

Repčíková spoke along the same lines, saying that the solution would be to make vocational school programmes more attractive to talented technicians, mechanics, IT specialists, bank officers, salespeople and nurses.

“It would be desirable to introduce elements of management and basics of entrepreneurship, accounting and marketing into the study programmes,” Repčíková said, adding that the professional component, as well as actual practice, should be strengthened within the programmes, “so that students, when they exit the classroom for the last time, could be self-confident in seeking a job or opening their own company”.

Fostering ties between businesses and schools at all levels has long been at the centre of discussions among foreign businesses operating in Slovakia. Čaplovič too reiterated that it was one of the aims of the changes he is planning to introduce during his term in office.

“As far as we know, the Education Ministry is planning to introduce the reform of vocational education, and thereby implement the dual education system similar to the one used in Germany,” Jake Slegers, the executive director of American Chamber of Commerce, told The Slovak Spectator, adding that the discussions about the reform should start in April, 2013. The amendment could be considered as a follow-up activity supported by various manufacturing companies in the regions, as it is based on research the Education Ministry has been conducting under previous governments as well, Slegers noted.

“The strong and systematic cooperation between vocational schools and companies - the so called dual system - serves as a role model,” said Guido Glania, executive board member of the Slovak-German Chamber of Commerce, in an interview with The Slovak Spectator, expressing his hope that the government will put forward specific projects in the near future.

Since 2009, businesses have had the chance to support vocational school students through direct scholarships amounting to a maximum of €57.73 per pupil per month in 2012. Over the course of 2012, employers operating in Slovakia have paid out motivational scholarships amounting altogether to €25,000 to 70 students at nine secondary schools, the Education Ministry reported at the end of the year.

Foreign businesses operating in Slovakia run their own programmes to link academia and businesses.

“There are some examples of good cooperation between middle schools and German companies,” Glania said, listing the fact that companies treat interns of the local schools as apprentices with a view toward teaching the relevant skills and providing knowledge, and sometimes donate technical equipment and train secondary school teachers. “However, all these are case-by-case local initiatives. They are not supported or facilitated by the overall framework of the educational system in Slovakia.”

Perhaps the most tangible form of cooperation between schools and businesses are internship programmes. Such programmes, however, have not really taken off in Slovakia as they have in other countries.

AmCham is trying to foster and boost interest in internships, both paid and unpaid, among students through a special section on its website.

“In the US, internships are mostly unpaid but they offer high value training in terms of content and acquiring practical skills and work habits,” Slegers said. “Students also often get credits from universities for doing such practical internships. The internship experience is invaluable in terms of their future employment.”

Foreign investors have welcomed the changes pursued by the Education Ministry in relation to vocational schools so far, but expect much more.

“It is important that young people become genuinely interested in technical jobs and do not see them as a plan B,” Glania said, adding that more attractive secondary schools with clear career paths could help to achieve that.

“For instance, it would be useful to establish universities for applied sciences which are geared towards practical skills and knowledge,” Glania suggested, explaining that these institutions can be a great way for skilled practitioners to improve their educational background and boost their careers.

“We are afraid that we haven’t seen many significant measures taken by the government in the education sector so far,” Slegers said. “The businesses would like to see a specific mid- and long-term vision and strategy for Slovak education. There are several changes we would expect, among them making Slovak education an apolitical priority.”

For AmCham, 2012 has been the Year of Education. As a result, the chamber came up with various recommendations for the ministry. For instance, at the university level, businesses would like to see changes to the financing system and the introduction of a quality monitoring system, as well as a transparent system of stimuli with a minimal administrative burden that would motivate employers to participate. At the secondary school level, nationwide entrance exams for mathematics, Slovak language and a foreign language could solve some issues.

The OECD has recently also pointed out some problems in Slovakia’s education system that should be solved in order to boost the national economy. One of the proposals was to use already available school evaluations to raise the quality of teaching through identifying dysfunctional schools as well as the best teaching practices. Moreover, the OECD report advised the country to increase education funding and raise teachers’ salaries.

Slovakia is among the OECD countries that spend the least on education per student. Education only accounts for 4 percent of GDP, one third less than the OECD average, the report reads. Also, teachers in Slovakia are among the worst paid in the OECD.

“On average, a teacher earns less than half the average wage of a tertiary graduate, compared to between 77 and 89 percent in the average OECD country,” according to the report.

If Slovakia wanted to raise the salaries of teachers to 75 percent of the average wage of tertiary graduates, it would require a pay increase of around 50 percent, costing about 0.5 percent of GDP, the OECD wrote in the survey.

In addition to this, the OECD recommended that Slovakia supports the education of disadvantaged pupils, in particular the development of pre-school education for Roma children, and to improve the transition from school to work through the acquisition of professional experience during studies by developing work-based vocational training, according to the report.