IMAGES featuring a retired lawyer wearing blue ear defenders and holding an imitation assault rifle while welcoming Supreme Court judges, a law professor, a top prosecutor and two other judges at a bar named after a notorious mafia family provoked much controversy back in 2011 after being published by the tabloid daily Nový Čas. Two years later some of the participants in the party – for what they called the Judiciary Oscar Association – at the Bonanno bar in Rajecké Teplice are seeking damages totalling €940,000 from the publisher of the daily, Ringier Axel Springer Slovakia, while objecting to the media’s interpretations of the images. 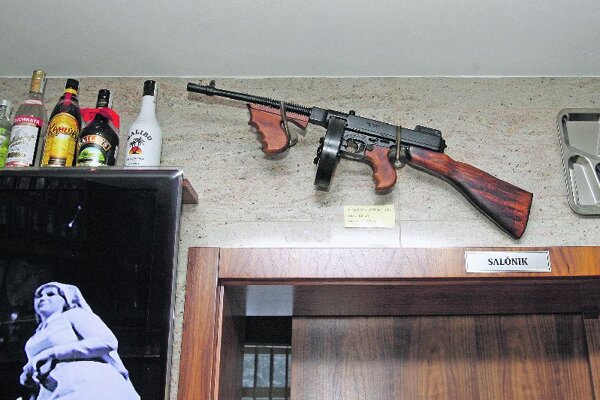 A decoration at the Bonanno bar. (Source: SME)
Font size:A-|A+0

IMAGES featuring a retired lawyer wearing blue ear defenders and holding an imitation assault rifle while welcoming Supreme Court judges, a law professor, a top prosecutor and two other judges at a bar named after a notorious mafia family provoked much controversy back in 2011 after being published by the tabloid daily Nový Čas. Two years later some of the participants in the party – for what they called the Judiciary Oscar Association – at the Bonanno bar in Rajecké Teplice are seeking damages totalling €940,000 from the publisher of the daily, Ringier Axel Springer Slovakia, while objecting to the media’s interpretations of the images.

Back in late August 2010, Ľubomír Harman, a 48-year-old gunman wearing blue ear defenders and armed with an assault rifle, shot dead seven people before killing himself in Devínska Nová Ves. The Judiciary Oscar Association met two months after the shooting spree in October 2010, and in June 2011 Nový Čas published images from the party of retired lawyer Tibor Péchy sporting blue ear defenders and carrying an imitation assault rifle, plus video footage of the meeting. The judges now object to associations between the images from the Bonanno bar and the mass murderer, arguing that there was no mimicking of Harman. They also claim the photographs were modified and falsified.

A former justice minister has called the lawsuit a failure of judgment on the part of the judges while a media freedom watchdog said that the protection of the privacy of public officials should not be placed above the public interest. The editor of Nový Čas, Júlia Kováčová, said that it is unthinkable that in a democratic society journalists can face the threat of paying such astronomical non-material damages for what she called “pointing to facts or expressing opinions”, the Sme daily reported.

The lawsuit involves acting general prosecutor Ladislav Tichý, who is seeking damages of €200,000; Supreme Court Justices Štefan Michálik, Daniel Hudák (who also served in the past as state secretary of the Justice Ministry as a nominee of the Slovak National Party), Milan Lipovský and Juraj Seman are seeking €100,000 each, according to Sme. Jozef Korduliak, a district judge from Čadca, is demanding €120,000 from Nový Čas, as is Péchy, the retired lawyer. Štefan Comorek, the husband of the owner of the bar, is also seeking €100,000, Sme wrote.

The plaintiffs argue that the party was a private event which the judges attended in their free time, suggesting that the media created a false connection between the tragedy and the few trivial actions of Péchy, Sme wrote. They explained that Péchy did not plan the welcoming act and that he had only used decorations from the bar, while attributing the blue colour of the ear defenders to the fact that that is the most commonly offered type in distribution, Sme wrote.

“There have been no illegitimate interventions into the personal rights of the participants of the meeting at the Bonanno bar and thus their claim for non-material damages should not be met,” Róbert Bános, the lawyer representing Nový Čas told the daily.

Before filing the lawsuit, lawyers representing the plaintiffs had neither demanded a correction from the daily nor had they requested an out-of-court settlement.

The International Press Institute (IPI) said it views the lawsuits, as well as the state of the judiciary in relation to the freedom of speech and the media, as alarming, and the organisation is ready to protest against it not only at home but also internationally through its partners, Pavol Múdry, vice-president of the IPI, told The Slovak Spectator.

“It has become a rather bad habit here for public officials to blame for their disclosed mistakes those who reveal these failings, mainly journalists and the media,” said Múdry, adding that this is happening despite many rulings by the European Court for Human Rights, to which our judiciary should be legally bound.

Múdry finds it shocking that such a high number of these lawsuits come from representatives of the community in which the decisions of the European court should be understood the most clearly.
“In principle these decisions [the lawsuits] elevate the protection of the privacy of public officials above the public interest,” Múdry said.

None of the participants in the meeting have ever faced disciplinary proceedings for their behaviour in the video. Former justice minister Lucia Žitňanská, who at the time ordered an inquiry into the event but finally decided not to initiate a disciplinary proceeding, now says that those involved have failed to understand their own role in the situation.

“If they had failed to understand at the time they [the images] were published, that this is behaviour that citizens cannot accept from judicial elites, then today they are showing with this lawsuit that it is a total lapse of judgment and a misunderstanding of their own role,” Žitňanská said, as quoted by Slovak Radio (SRo).

Justice Minister Tomáš Borec refrained from commenting on the case, according to SRo.

Nevertheless, Sme quoted Tichý as saying back in 2011 when the case erupted that “from the position of deputy general prosecutor it would be annoying if I sued the publisher for libel”, Sme wrote.

Múdry: Media will be intimidated

When referring to the lawsuit, Múdry suggested that the judges and prosecutors probably do not consider the fact that they can only be penalised by judicial or prosecutorial councils, and eventually by the courts – meaning their own colleagues – as enough of a deterrent, adding that to change this situation the Slovak Constitution would need to be revised, for which there is not enough political will.

Steps like this latest lawsuit, according to Múdry, are heading towards a situation in which judicial officials will prevent even media and public control of their actions.

“The media will be intimidated and they will choose not to report about missteps in this department out of fear of similar lawsuits,” said Múdry. “It is only a small step away from self-censorship. Even today we cannot publish the faces of the judges.”

In June 2011 the four Supreme Court judges at the party panned the media for its coverage of the event.

“It has never been, nor will it ever be, our intention to dishonour the memory of victims from Devínska Nová Ves in any way whatsoever,“ the judges said in their statement, while insisting that any connection between the party and the shooting spree had been artificially created by the media, the TASR newswire reported in June 2011.