THE EUROZONE will continue to linger in its second recession since 2009, when the economic downturn contaminated the world, the European Commission said when announcing modifications to its earlier prognosis, which had expected the eurozone’s economies to return to positive numbers in 2013. Yet, the dim outlook for economic growth offered by the EC on February 22 cast Slovakia in a slightly more favourable light, since the commission’s winter outlook estimates that the country will avoid recession and grow at 1.1 percent, albeit 0.9 percentage points down from its November 2012 prognosis. 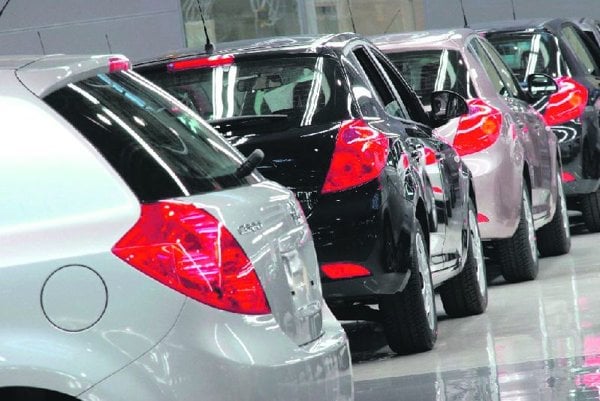 THE EUROZONE will continue to linger in its second recession since 2009, when the economic downturn contaminated the world, the European Commission said when announcing modifications to its earlier prognosis, which had expected the eurozone’s economies to return to positive numbers in 2013. Yet, the dim outlook for economic growth offered by the EC on February 22 cast Slovakia in a slightly more favourable light, since the commission’s winter outlook estimates that the country will avoid recession and grow at 1.1 percent, albeit 0.9 percentage points down from its November 2012 prognosis.

With car-export growth fading in 2013, GDP growth is set to decelerate to 1.1 percent, reads the official EC report, suggesting that “the forecast also reflects the adverse short-term impact of a sizeable consolidation in private consumption and public investment”.

“The prognosis is no surprise for us; Slovakia will, according to the EC, belong among those countries of the eurozone which will avoid recession,” Slovak Finance Minister Peter Kažimír said in response to the EC’s winter growth forecast, as quoted by the SITA newswire. “After Estonia and Malta, along with Ireland, we will be the third fastest growing economy.”

The country’s central bank, the National Bank of Slovakia (NBS), on January 29 scaled back its growth estimate, made in December 2012, from 1.6 percent to 1.3 percent for 2013, suggesting that the prediction was influenced overall by two factors: moderately slower growth in foreign demand, which impacted the country’s export performance, and worse-than-expected indicators in the domestic economy.

Shortly thereafter, the Finance Ministry whittled its forecast down to 1.2 percent, explaining that the “debt crisis in the eurozone over the past months has unfavourably impacted the economies of our main trading partners and increasingly concerns Slovakia as well”.

According to the European Commission, with no further productive expansions of the auto industry planned for 2013 and high frequency indicators pointing to reduced expectations on orders and a drop in industrial production, export growth is expected to decelerate sharply in the first half of 2013.

“Given that profitability in the tradable sector remains high, a moderate pick-up is expected to take place from the second half of 2013 onwards,” the EC said in its report.

The slower economic growth will also take its toll on the labour market: while in November, 2012, the commission forecast Slovakia’s unemployment rate at 13.5 percent, it has since increased its estimate by 0.5 percentage points.

The winter forecast of the EC came as no big surprise to Eva Sadovská, analyst with Poštová Banka, who referred to similar instincts displayed by the country’s central bank as well as the Finance Ministry in response to a worsening outlook for the whole EU.

“Since Slovakia is a small, open and pro-export oriented economy, the worsening estimates of economic growth for its largest trading partners automatically translates into predictions for our country,” Sadovská told The Slovak Spectator, noting that Slovakia still remains one of those countries which should avoid recession this year.

Slovakia’s economy will be influenced by weaker foreign demand, which will translate into weaker production of industrial exports, said Sadovská, adding that cautious consumer behaviour will continue to retard domestic consumption.

“Our forecast for this year’s real GDP growth of Slovakia is even lower due to anticipated weaker contribution of net exports, which were the key driver of Slovak growth over the past three years of recovery,” Vladimír Vaňo, chief analyst with Sberbank Slovensko, told The Slovak Spectator.

However, last year the foreign trade surplus jumped to a new record high of €3.6 billion, said Vaňo, adding that moreover, the dynamics of exports is continuing to soften in line with weaker external demand, which is also demonstrated in the decline in manufacturing production in December, which stood at -5.8 percent, the first annual drop since October 2009.

“The highest registered unemployment since April of 2004 and consumer confidence approaching the lowest levels since early 2009 suggest that final household consumption will also continue to decline in 2013,” Vaňo said.

According to Vaňo, the inevitable need to stabilise the growth of public debt and to narrow the budget deficit calls for fiscal restraint, which means negative pressure on final government consumption.

“Although there are a few major investment projects embarked upon last year [that are] still under construction, the appetite of corporations for new investments can be expected to remain subdued as well this year,” Vaňo said, adding that after contributing to growth positively in 2011, gross fixed capital formation recorded a real annual decline of over 3 percent last year. “The above-mentioned factors hence explain why the outlook for real GDP growth in Slovakia in 2013 seems rather bleak.”

The European Commission estimates the headline deficit for 2013 to stand at 3.3 percent of GDP, slightly above the declared commitment of the Slovak government to contain the public finance deficit under 3 percent. Taking into account the effect of one-off measures, the structural balance is also expected to reach 3.3 percent of GDP, the EC said. According to the commission, a slight deterioration in the headline deficit is projected for 2014 under unchanged policies.

“This reflects mainly the fact that some consolidation measures in 2013 are of a one-off nature or are set to expire,” the EC said, adding that the public debt ratio is projected to increase gradually over the forecast horizon and reach 57 percent of GDP in 2014.

“Obviously, with a dim outlook for economic growth, the major risks for the public deficit are on the upside,” said Vaňo, noting that on the other hand the government has repeatedly committed itself to the fulfilment of the fiscal consolidation plan. “One has to keep in mind that even in the case of unfavourable development of tax revenues, the development of fiscal balance can be steered by additional consolidation measures, either on the side of revenues or expenditures.”

The risks of the slowing economy also make it more difficult to achieve the public finance targets, according to Sadovská.

“The slower growth of the economy could underscore not only the slower filling of the state coffers, but also reduces the basis of GDP from which the public finance deficit is being calculated in percentage terms,” said Sadovská.

Nevertheless, the EC has also said that in addition to “fairly robust external demand in 2014”, consumer confidence and domestic demand are expected to gradually strengthen over the forecast horizon, underpinning a pick-up in GDP growth to 2.9 percent in 2014.

As for the major risks Slovakia’s economy will face in 2013, Vaňo explains that one of the measures for openness of an economy is annual foreign trade turnover, which is the sum of exports and imports expressed in proportion to the annual GDP of the country.

“In the case of Slovakia, the foreign trade turnover amounts to more than 170 percent of the GDP. To put it into perspective, final government consumption represents only about 18% of Slovak GDP,” Vaňo said, adding “the numbers speak for themselves as far as the major risks to the Slovak economy are concerned”.

Yet, in the face of an ongoing slight eurozone recession, “the true amplifying risk for the Slovak economy could spring from ill-considered fiscal consolidation measures; especially should they hurt the competitiveness of Slovak exporters and the attractiveness of the local investment climate”.

Given the inevitable weakening of external demand, “any economic policy measures which hurt private entrepreneurs and are unfavourable towards investors could be labelled by the Slovak saying of ‘pouring oil onto flames’,” according to Vaňo.

What has kept Slovakia out of recession?

According to Vaňo, last year, it was the spectacular annual improvement in the foreign trade surplus that did the trick for the overall real GDP growth figure, despite the fact that real retail sales, manufacturing production in seven out of 13 industrial sectors, and gross fixed capital investments have developed in a way which is typical for a recession.

“High concentration of Slovak industry is also part of the answer to the interesting observation that Slovakia last year avoided the fate of Hungary and the Czech Republic, which have already slipped into recession,” Vaňo said.

Production of transport vehicles and manufacturing of computer, electronic and optical equipment constitutes over one third of Slovakia’s industrial sales. Together with the production of base and fabricated metals, these three industrial sectors comprise over half of manufacturing sales in Slovakia, Vaňo suggested.

“These three industries ranked among the most successful ones last year, as they were able to fully leverage the advantages of euro adoption in order to strengthen their regional and international competitiveness,” Vaňo added. “However, in seven of the smaller industrial sectors, industrial production declined last year.”